Daniel and the Great Unveiling

Toward the end of the liturgical year, we Catholics hear at Mass from the mysterious, often confounding, and utterly fascinating book of Daniel. Recent scholarship has demonstrated that the book of Daniel had an extraordinarily powerful influence on the first Christians, providing them a most important template for understanding the significance of Jesus. Daniel is, of course, an example of apocalyptic literature, which in the common understanding means that it has to do with the end of the world. Well, yes and no. The word "apocalypse" carries the sense of unveiling, literally taking back the  kalumna (veil). This is why, when the early translators rendered the term in Latin, they chose " revelatio"(removing the  velum, unveiling). Apocalyptic books, therefore, reveal something of decisive significance. They display a hidden truth, indeed raising the curtain on a new world.

The book under consideration is famous, of course, for its memorable narratives of Daniel in the lion's den, of the three young men who are thrown into the furnace but who survive through God's grace, of the handwriting on the wall, and of the rape of Susannah. But it is also a book of visions, dreams, and their interpretation, for Daniel is something like Joseph in the book of Genesis, an inspired solver of puzzles. In the second chapter of the book of Daniel, we hear of a dream dreamt by King Nebuchadnezzar. In his night vision, the king saw a statue made of a variety of substances: its head of gold, its breast and arms of silver, its belly and thighs of brass, and its feet of clay. He then saw a stone, not hewn by a human hand, crash into the statue and shatter it to pieces.

None of the king's wise men and soothsayers could interpret the dream, but Daniel, an Israelite from the community of exiles, was able to read it. The statue constructed of various substances stood, Daniel explained, for a series of kingdoms that would follow one upon the other. The destruction by the stone, not made through human intervention, indicated that the final kingdom would be established by God alone. In the seventh chapter of the book of Daniel, this truth is reinforced. We are told that Daniel himself had a dream of four great beasts coming up out of the sea, the first like a lion, the second like a bear, the third like a leopard, and the fourth a terrible animal with ten horns and teeth like iron. Then, as the dream continued, the "Ancient of Days," the Lord God, took his throne and thousands ministered to him, and the four beasts were disempowered. Next Daniel saw "one like the Son of man coming on the clouds of heaven." Arriving at the throne of the Ancient of Days, he was given "dominion, power and glory" and told that all nations would serve him. Once again, we have a reference to the four kingdoms that will succeed one another and then a final kingdom, not of purely human origin, that will come to be.

When will all of this take place? Here we have to look at chapter nine of the book of Daniel, which recounts, not a vision, but a direct angelic revelation. Daniel had received the tradition from the prophet Jeremiah that the restoration of Jerusalem and Israel would happen seventy years after the Babylonian exile, but that time had already passed. The angel Gabriel (keep him in mind for later in the Biblical story) tells the prophet that this means "seventy weeks of years," which comes out to seventy times seven years, or 490 years.

Now if we put this all together, we conclude that pious Jews, studying the book of Daniel, would be expecting four wicked kingdoms to rise and fall before the final kingdom would be ushered in. Further, they would be anticipating that this consummation would occur around five hundred years after the Babylonian Captivity, which took place between 587 BC and around 500 BC. So now consider pious commentators in the first century. They had seen four great kingdoms emerge: Babylon, Persia, Greece, and finally Rome. More to it, they knew they were living just around five hundred years after the Captivity. The upshot was that Messianic expectation was especially fevered among Jews as the first century got underway.

And therefore, when Jesus came preaching precisely the kingdom of God, we should not be surprised that people took him to be announcing the fulfillment of the Daniel prophecy. But was this in the mind of Jesus himself? Recall that when he stood before the Sanhedrin at the climax of his life and was directly asked whether he was the Messiah, Jesus replied, "I am, and you will see the Son of Man coming on the clouds of heaven." He was, of course, directly citing the seventh chapter of the book of Daniel, announcing himself as the human/divine figure, who would be given dominion over all the nations. The next day, over the cross of Jesus, Pontius Pilate, representative of the fourth kingdom, the Roman Empire, placed a sign announcing that the new and final king had arrived: "Jesus of Nazareth, King of the Jews."

This, in a word, is the apocalypse, the great revelation: a kingdom, not made by human hands, has come, a kingdom that succeeds a series of fallen polities, a dominion that will last forever. What is this kingdom? It is not one more political or social arrangement. It is Christ himself and the Church, which is the mystical body of Christ. The emergence of the Church of Jesus signals the end of the old world and the beginning of a new one.  It is the pulling back of the veil. 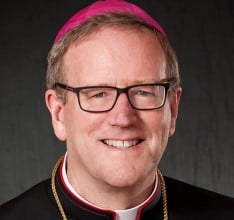