SPOILERS! Be wary of reading further if you have not seen the new movie, as there are spoilers for Star Wars: The Force Awakens in this post, as well as references to previous Star Wars movies. 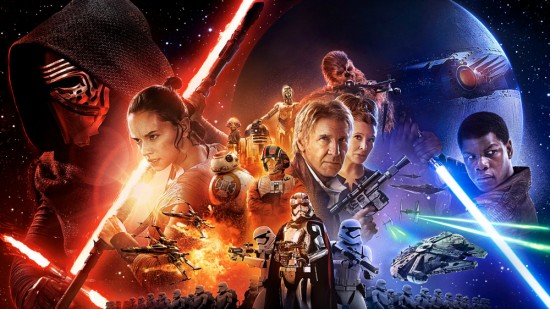 On the second day of Christmas my true love gave to me…STAR WARS TICKETS!

Okay, that might not be exactly how it went, but my husband and I were granted several hours free of the kids to run away and be giddy waiting for Star Wars: The Force Awakens to start and scarfing popcorn like it’s nobody’s business. Manners were left behind, but we were in the empty front row so I’m off the hook.

What plots caught you off guard? I’m so completely abuzz with thoughts and theories! On with the first impressions!

This movie feels like the way the prequels should have been. We are introduced to a plethora of new characters in this movie and I’m intrigued by each one. I love how Finn’s character is honest and he's on a journey to being true to himself. Having been raised and formed his whole life to be a storm trooper, he makes an uncharacteristic choice: that being a storm trooper is not compatible with who is. There’s Rey, the girl who has lived alone since she was about 5 years old and who scavengers shipwrecks to survive but contains unimagined power. Kylo Ren, self-renamed from Ben, child of Leia and Han, who worships his grandfather’s legacy but struggles with the choice to be evil. And Snoke who is Ren’s overlord, of whom we know nothing, and also the guy whom I thought was unreasonably Gollum-like until I learned later that he’s played by Andy Serkis.

Ren is a conflicting character to like, due in no small amount to his choice for evil. I like how his character highlights the role of choice in these matters. I never felt Anakin’s choice was valid in becoming evil – how does one jump from allowing Darth Sidious to kill a Jedi Master to binding himself completely to this evil guy? I never believed it, it didn’t feel real (but those movies weren’t my favourites due to a lack of believability anyway). But Ren? This is how one becomes evil – making the choices over and over again and choosing to not be repentant. Feeling the call to change, which we see when he reveals he’s being ‘tempted by the light,’ but struggling and struggling to continue to choose the dark. He understands to some degree that it’s the wrong path or he wouldn’t have the struggle. It’s our story of sin, but Ren is not choosing redemption (in this movie, at any rate). And how did this happen, that he was warped to believe the dark side is what he’s made for? How did this Snoke character lure him away so much that he turned on his parents and his uncle?

Rey is a crazy awesome female lead, if a bit predictable. She is strong, she knows herself, she’s a fan of Han Solo (fulfilling all our dreams), she’s clever and resourceful. My favourite scene of hers was when she was captured and was being mind-probed for the map to Luke, and she discovered she could stop Ren. She and Ren did such a great job of the mental struggle without using any words, I was left on the edge of my seat. And then she became, unintentionally, the aggressor for just enough of a moment to capture a bit of his history and his memories. Harry Potter fans, don’t tell me you didn’t have flashbacks to Harry and Snape’s Occlumency lessons, 'cause this was Star Wars tribute to it, I’m sure of it.

My husband’s favourite scene was Finn’s first meeting with Rey: he goes to save her, but is left redundant in that attempt, then she sees him and her look screams: kill. Why did Finn hesitate so long?! Holy moly, if I had someone look at me that way my only reaction would be that of Pumbaa (from The Lion King) when he “meets” Nala for the first time: “SHE’S GONNA EAT ME!!!!”

Finn’s transparency is too funny and even Han Solo picks up on it when he tells him “Listen, ‘big deal.’ You got another problem. Women always figure out the truth. Always.” And Finn, before his relationship with Rey could blow up because of the lie about being a part of the Resistance (which is what usually happens), chokes on his pride and tells her the truth. He is, in the end, truthful about who he is to her and to himself. He’s a strong character because of a couple reasons: he recognizes that he’s fearful and scared and wants to run away and also that he has only one friend, and he’s willing to go to great lengths to save her if he can, even if it means embracing that fear.

It is said that the movies all reflect each other (which was done intentionally) in their order, and this being the first movie, we see a backwoods nobody of a character (Luke, Anakin, Rey) discover they are endowed with The Force, find a mentor (Obi-wan, Qui-Gon Jinn, Han), leave everything behind everything they (Luke, Anakin, Rey) know to embark on an adventure where ultimately their beloved mentor dies and they are forced to continue to carry the torch. I expect we shall see how entwined Rey and Ren’s characters are in the next film – is she Ren’s sister? Cousin? Did he kill her parents during that first round of Jedi training?

The story line is quite similar to all epic story lines, like the Lord of the Rings, the Lion, the Witch, and the Wardrobe, Harry Potter… I believe we can expect great things from this series. I’m thrilled with the characters and find there’s much more to them than the characters in the prequels. If you’re looking for a way to revamp the way you watch them, I recommend watching them in the Machete Order, which skips Episode 1 (which was a rather awkward one at any rate for a number 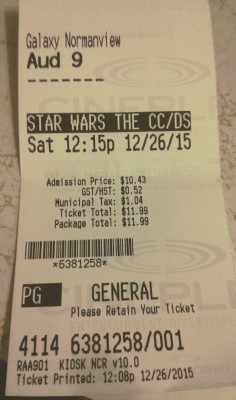 of reasons). I'm looking forward to this story unfolding more in the next movie, a full 1 year and 5 months away. Oh, and if you're looking for some big rabbit hole to sink into in the meantime, I recommend wookieepedia.com. You might not surface until close to the next movie's release.

Did you get your ticket? What were your first impressions? And what do you think Rey's background is? 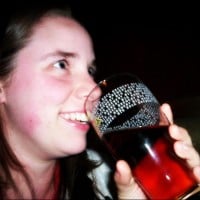