In With the Old: Why I Love Being a Senior (and you will, too) 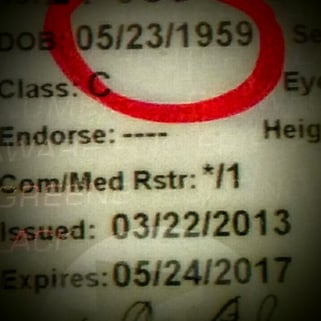 Twenty months ago, I celebrated my 55th birthday. But it wasn't until a couple of days ago, just as Father Time was making for the exit door, that I actually ordered my first meal off a senior menu. Naturally, this put me in a pensive mood, so as I sat before my one-egg-omelet and bran muffin, I got to thinking about life at 55+. I decided that seniority rocks, and here's why:

You have even more reasons to tell your kids to “look it up."

Where were you in ’92? If you’re like me, you were mothering four little children and expecting your fifth. You weren’t paying much attention to the evening news, because all the current events you needed to know about were taking place in your kitchen. So now that your school-aged kids are asking you about, say, the effects of 1992's Hurricane Andrew, you’re justified in replying, “I don’t know; look it up.” Not only because you weren’t paying attention when Hurricane Andrew was in the news, but also because you were sitting in history class years before there even was a Hurricane Andrew.

You can rock accessories that would have made you look ridiculous when you were younger.

If at age 40 you were seen in public wearing a top hat and gladiator boots, people would call you crazy. But if you stepped out in those same accessories at age 55, you’d be admired for your spunk and élan. I should know. Every day, my grandma used to don silk brocade dresses and ornate Italian gold jewelry and stroll around our Bronx neighborhood. In the summertime, she’d also - no kidding - wear flowers in her hair. Far from being ostracized, Nanny was one of the most popular gals at the senior center.

You get invited to things

My parish has something called the Tuesday Breakfast Club. Its members are older ladies who dine together at a local eatery every Tuesday morning after Mass. Recently, one of the club members collared me after morning Mass and assured me that, before I knew it, I’d be joining the ladies on their breakfast outings. It was the closest thing to an invitation that I’d received since wearing my gladiator boots to Costco.

Your Biblical counterparts are awesome

The widow who gave two mites. Anna, the prophetess. Elizabeth, the mother of John the Baptist. Sarah, the wife of Abraham. (Incidentally, Sarah lived to be 127!) These women served God in quiet ways. They are splendid role models for those of us who - willing spirit notwithstanding - may no longer have the oomph to found orders, confront kings, or trek around the world as missionaries.

People think you look great, even if you don’t really

Sad but true:  When folks find out that you’ve raised a large family, they expect you to look like the bedraggled old woman who lived in a shoe. This means that you need only avoid sinking into bedragglement in order to be considered a regular peach. As long as you have decent posture and most of your teeth, people will be impressed.

Are you 55 or older, and if so, what do you like best about being a senior?

Will you attain seniorhood in 2016?  How do you feel about that?