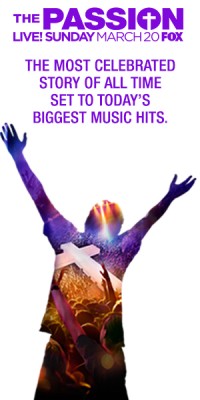 Editor's note: While I haven't yet prescreened THE PASSION, coming Sunday night on FOX, I'm excited to see it. We're sharing this information for you and your family but are not making an editorial review since we've not yet seen the event. Blessings! Lisa M. Hendey

NEW ORLEANS, March 17, 2016 – THE PASSION, a two-hour epic musical event, will air LIVE from New Orleans on Palm Sunday, March 20, 2016 (8:00-10:00 PM ET live/PT tape-delayed) on FOX. THE PASSION, written by Peter Barsocchini (“High School Musical”), tells the 2000-year-old story of the last hours of Jesus Christ’s life on earth through passages from the Bible and a variety of popular music, sung by the cast, and arranged specifically for this event by executive producer and hit music producer Adam Anders (“Glee,” “Rock of Ages”).

The event will follow the dramatic and inspirational story of Jesus of Nazareth, as he presides over the Last Supper, and then is betrayed by Judas, put on trial by Pontius Pilate, convicted, crucified and resurrected. The event will unfold live at some of New Orleans’ most iconic locations, while featuring a procession of hundreds of people carrying a 20-foot, illuminated cross from outside the Superdome to the live stage at Woldenburg Park on the banks of the Mississippi River.