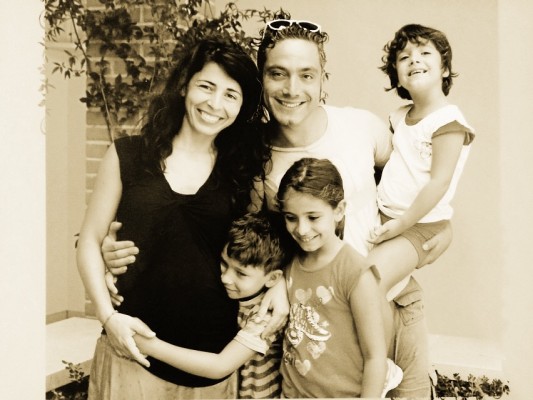 Elisa Lardani Marchi with her family. Photo courtesy of the author.

“Sometimes a funeral can become a celebration, with an abundance of joyful tolling of the bells,” writes Luca Marcolivio who was in attendance at the funeral of Elisa Lardani Marchi, March 2, 2015. The entrance song at the funeral was “The Wedding March,” a witness to Elisa’s love for Christ, her husband Luca, and her dedication to marriage and family ministry. There were three thousand people in attendance at the funeral Mass in the Cathedral of Orvieto. Seven priests con-celebrated on the altar and thirteen more surrounded the altar in the sanctuary, traveling from Assisi, the rest of Italy, and Paris. Several days earlier the 37-year-old Elisa had given birth (or in Italian: “given to the light”) to her fourth child, Maddalena. During labor she began to hemorrhage and passed away due to numerous complications ending in disseminated intravascular coagulation (DIC), her new daughter Maddalena in stable condition in the NICU.

Maddalena a year later is healthy and doing well, her name an intentional reminder of the woman who first announced the resurrection of Jesus to his Apostles in the Gospel narrative. Since her sudden death, Elisa’s family and friends have testified to the power of the Resurrection again and again.

Elisa’s home is Orvieto, Italy, where she grew up literally in the shadow of the Cathedral, a masterpiece of medieval art and architecture. In a side chapel just around the corner from her childhood home, resides the relic of the Miracle of Bolsena, a thirteenth-century Eucharistic Miracle in which blood poured from the host and quelled a Bohemian priest’s doubts of the reality of Christ’s presence in the sacrament of the Eucharist. The blood-stained Corporal can be viewed there, a daily reminder of the blood shed in Christ’s Sacrifice for us.

“There is no human explanation” for this death, said the priest who officiated the funeral, reminding the crowd of the biblical command “Give and it will be given to you,” saying: “Elisa gave everything, even unto the last drop of blood.” Monsignor Renzo Bonetti who con-celebrated also underlined that “it is not the years which count but the fullness of God. Elisa in the labor and delivery room found her Calvary and her Cross and carried it until the end. More she could not have given.”

Elisa’s brother Alessandro wrote to me the week after her death: “In the city of Orvieto, the city of the Eucharistic Miracle, of the blood poured from the Holy Host, perhaps after 750 years a new miracle is needed, that of the small and humble mother who poured out her blood, and made of herself Bread Broken for Love.”

"Body Broken for Love" has become the testimony Elisa left behind, the theme of a conference in Orvieto exploring what it means to lose a spouse. Timed to coincide with the one year anniversary of her “birthday in heaven” the conference (Feb. 27-28, 2016) “is the beginning of a journey into the exploration of love in the midst of sorrow,” wrote Elisa’s husband Luca Marchi. An interdisciplinary exploration of the theme was an appropriate first endeavor for a newly formed non-profit to honor Elisa, a psychologist who sought to integrate faith and reason in her work. Priests (including the Bishop of Foligno), a Philosophy professor from the Pontifical Lateran University of Rome, theologians, family ministers, and a psychologist presented on the verse from Song of Songs “"Strong as death is love” (8:6).

Through this conference as well as in many public interviews Elisa’s husband Luca has testified to the strength of the sacrament of marriage: an eternal bond created by the Holy Spirit whose love continues to grow and to give even beyond the grave.

According to Father Luigi Maria Epicoco who presented a lecture that weekend, Mary Magdalene’s encounter with the risen Jesus “is not the end but the beginning. She didn’t know it was Easter when she went to the tomb Sunday morning. She wasn’t there because she had faith. She was there because she had LOVED and she didn’t run away from the reality of the sorrow she was living.” But while she was at the tomb she encountered the risen Lord and became the first to announce the Good News.

Luca speaks of a love for his wife Elisa that continues to live and grow as he experiences his children, especially little Maddalena, who, like her namesake Mary Magdalene, is a beginning, not an end.  It has led him to deeper reflection on the sacred vows he pledged at the altar: to honor her ‘all the days of my life’: “This does not refer to the other’s life, but to my own!” explains Luca in an interview with Silvia Lucchetti on it.aleteia.org. “Only God can do miracles, but the Communion of Saints is no joke,” Luca says in the interview with Lucchetti, “it is a real thing that we can experience. I can say that I feel it every day in living this love, living it in the Eucharist, in Eucharistic Adoration: God is the strength and the fuel of we believers.”

Others in attendance at the Orvieto conference had already undertaken this journey of love in the midst of sorrow, including Luca’s close friend from childhood Enrico Petrillo, husband of Chiara Corbello Petrillo, a young Italian woman who, after losing two babies within hours of their birth, refused to undergo cancer treatments for herself while pregnant with her third child. Her cancer became terminal soon after her young son Francesco arrived safe and healthy. She was “born into heaven” June 13, 2012 and since then her story has travelled around the world.

Elisa was a musician and a dancer and so it is appropriate to end by quoting a song written by Elisa and Luca’s priest confessor Father Luca Castiglione. “Sali E” speaks frankly of the sorrow and loss experienced by those close to her, but plants seeds of hope and expansive redemption in the midst of it:

What we are doesn’t disappear,

dies to the earth and then

Make haste then and invite everyone

These fruits are not for us alone

About the author: Michelle Arnold Paine is an artist whose faith plays an integral part of her work. She began to explore the visual richness of Catholicism while studying in Italy during college. She was confirmed at Easter 2001 in the Cathedral of Orvieto, Italy. Michelle now lives in Ohio with her husband and two daughters. Her paintings can be viewed at www.michellepaine.com.