Path of the Padres 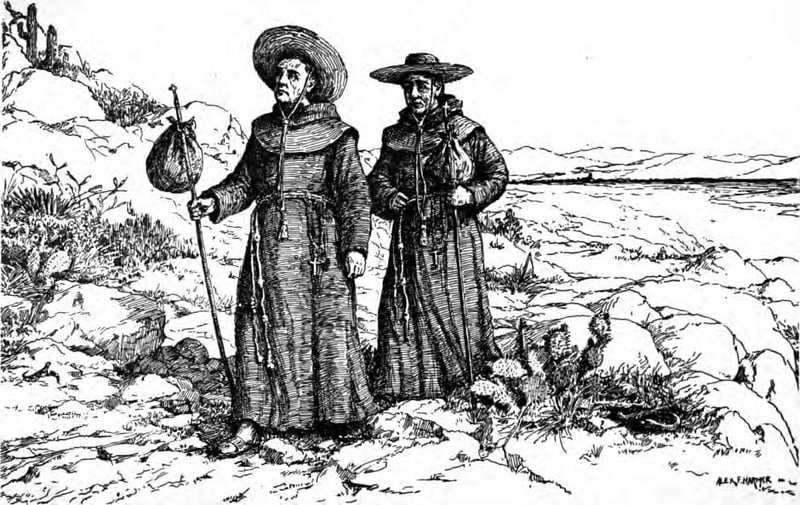 In 1769 St. Junípero Serra, a Franciscan missionary, began a chain of missions to bring the Gospel to the native people of what is now the state of California. The missions were situated mainly along California’s coastline from San Diego to the northern reaches of San Francisco Bay. There were 21 in all, with nine missions being directly founded by Serra.

When I think of those Franciscan missionaries I immediately picture a heavy woolen habit with cowl/hood, a white cincture or rope-like belt and a large rosary wrapped around the waist, and sandals. Very austere and humble attire as required by St Francis of Assisi for his band of brothers. I also think that this sort of garb was uncomfortable and hot. Imagine a tunic of wool; perhaps more often than not it was heavy and itchy. Combine that with the arid regions of Mexico where the 18th-century Franciscans were missionizing (Mexico proper, the southwest U.S., and California) and it was probably quite the sacrifice to be working those mission fields. But the zeal of those men kept them going. They were willing to endure hardships, even with their clothing, to spread the Word.

The other thing that strikes me about those men was that they left everything: their families, their countries, their friends, to do God’s work. They probably left everything with the realization that they would never return back to their origins. But they were happy and willing to do it.

I have always wondered what it would have been like for those missionaries in wild California. There were no maps, no roads, and totally unfamiliar territory to explore. What did they endure? Did that hot California sun sap them of their energy? What was on the other side of that hill or mountain? Lord Jesus, can I take another step? Thank you, Lord, for the respite of this stream or pool of water where I can quench my thirst, cool my body, and clean this smelly habit!

Every year the California State Parks offers a guided hike known as “The Path of the Padres.” Fr. Felipe Arroyo de la Cuesta, a Franciscan who was assigned to Mission San Juan Bautista, would travel from that mission into the San Joaquin Valley following what is now known as Los Baños Creek. Along the creek Fr. Arroyo would use the pools there to bathe; hence the name los baños, which translates into “the baths.” These baños were not far from the present-day city of Los Baños situated in western Merced County, California. It is from a diary that Fr. Arroyo kept describing the pools and his travels that the hike is based upon. The Path of the Padres is short in duration both as a hike and how long it is offered. It is approximately a five-mile round trip and it is only offered about six to eight weeks in the spring.

Every year I try to take advantage of the hike. When I do, I try to make it a pilgrimage of sorts. It takes one through a mostly unsettled area of California. It is mainly an area used for cattle-ranching but it is primitive enough to get a feel for what Fr. Arroyo and his companions probably saw as they passed through the area. I try to imagine those Franciscans so far from home, burning with the zeal of Christ, bringing the Gospel to a new world and new people. I try to imagine their hardships, their sufferings, and their endurance. I try to imagine the prayers that were on their lips: prayers for safety, prayers for success, prayers for respite, prayers of thanksgiving. It can be a very humbling experience.

As this article gets posted I will be preparing for this year’s hike which for me will be on April 16, 2016. Join me in thinking about those Franciscan missionaries who were so far from home. Pray for all missionaries (past and present) who go out into the mission fields to bring the Good News to all who do not know it.