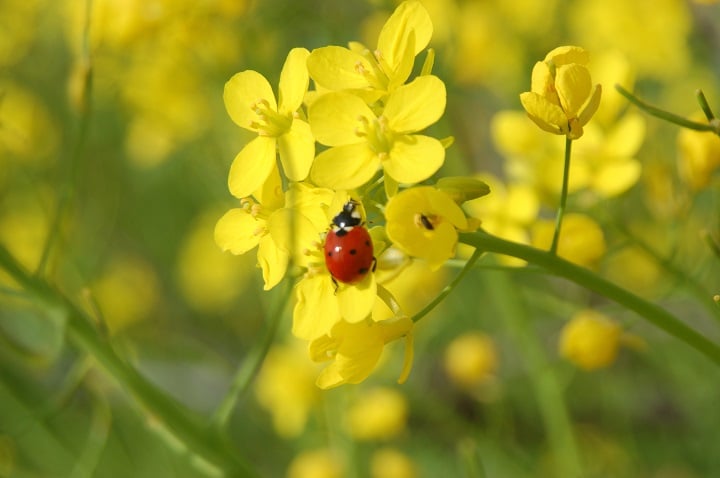 When the hibernating ladybugs appear on the inside of my window frames I know spring is just around the corner.

These ferocious mini-carnivores are the darlings of my gardens. As a child I would tip the leaf they were crawling on so the ladybug would fall onto my soiled hand. Then I would rotate my hand as it scurried across palm and fingers, tickling as it went. Eventually the little red bug would tire of my game and suddenly rocket into flight so fast that I never saw from where its wings had come.

I delight in seeing a few of them appear on my windowsills in late winter. My Franciscan heart won’t let me squish the little visitors, so I end up attending to their needs. Yes, it’s true; I give food and water to a bug. Plucking a leaf from a nearby houseplant, I place a droplet of water in the center and then lay it near the wandering red dot. Invariably these tiny creatures are thirsty and motor quickly aboard to have a drink.

After placing the leaf with its passenger onto the soil of a houseplant I lay a very tiny piece of apple nearby. I am not surprised when I check back on my tiny pet; I find it sharing a meal with a few of its buddies. Eventually, weather permitting, they are released outside.

So there it was, a ladybug on the sill of the kitchen window. I was happy to see one after a long winter and I placed a drop of water near it. I laughed out loud as it latched onto the side of the droplet and was suddenly set afloat with its tiny black legs swimming frantically while its pincers sucked the water thirstily.

It must have tried to fly off because the next thing I knew it was upside-down in the drain to the sink. To avert the impending doom I placed my fingertip nearby for it to latch on to, which it did, and pulled it to what should have been safety.

But my elderly hands desensitized by arthritis had moved in too hard and unintentionally injured the little creature. While lifting it back to the sill it slowly released itself from my finger and fell on to the counter and stopped moving. I was disheartened and chastised myself for being upset…it was JUST a bug for goodness' sakes!

Reflecting as I tossed the expired ladybug into the waste-bin, I was reminded that at times our good intentions can go awry. Our desire to help and encourage if brought forth too abruptly can harm. The response “I didn’t mean to do it” says a lot about not having thought things through. And sometimes it’s impossible to undo what’s been done.

When I’ve done something wrong, something I can’t undo and I feel discouraged and despondent, I am reminded of the words from St. Francis de Sales that encourage me. He guides me to know that it is important to acknowledge what I have done, in all my weakness and humanness, and having done what I could to remedy it—move on with awareness to avoid its repeating.

And when I screw up it is usually much bigger than a ladybug.