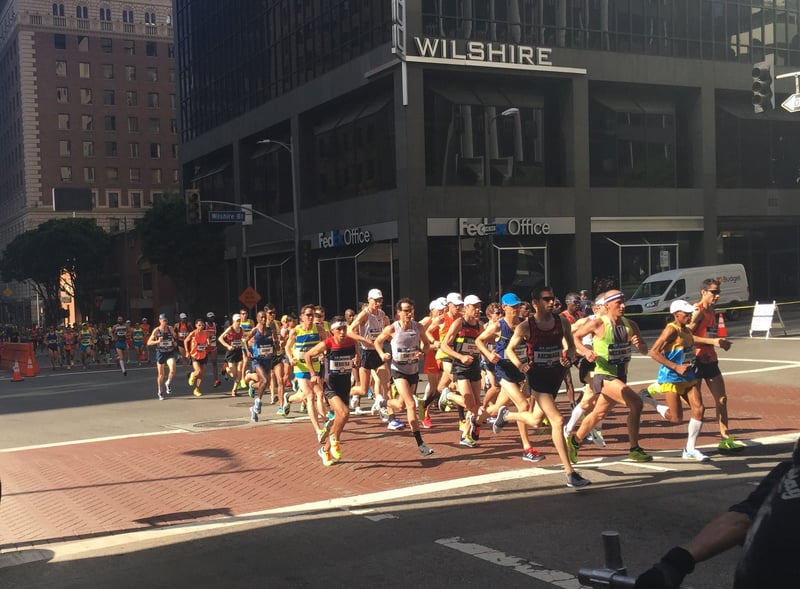 I have taken up running. There is no good reason. It just seemed like a good idea at the time. The time in question was just after the new year. I got an email from a sporting goods store. The email advertised a training program that would prepare me to participate in a running event in April. They offered training sessions to prepare for marathon, half-marathon and 5K races. Beginners were welcome, it told me. I had not run for  in more than forty years, I think that qualified me as a beginner. I decided to give it some thought.

Over the next forty-eight hours I found out that two of my children and their partners had already signed up for the half-marathon. I also happened to listen to an interview with a doctor who was discussing how critical movement is to health as people age. That was it. I figured I had better get moving. Something seemed to be nudging me to run.

I signed up to train for the 5K (3.1 mile)  event. Since I had never run further than two miles in my life, I thought this was more practical (and less work) than training for for the half-marathon. I started training the following Tuesday night.

The first thing that impressed me about running was how painful and unpleasant it was. (To be fair, any physical endeavor taken up in your sixties is bound to hurt!) The second thing that impressed me was how much love there was to be found in a community of runners. I mean this in the most Christian sense of the world. Not that these people were a sensitive, nurturing lot, but that there was what Thomas Aquinas would have called “willing the good of the other as other.”

The coaches were undaunted by the idea that I was starting with so little running experience at a fairly old age. They were encouraging, but not patronizing. Coaches would station themselves at points along whatever trail we were running that day. It didn’t matter if I was making a good pace or having a rough day, each coach would always cheer me on with a chant of “good job!”

One night, after a series of running exercises totaling five miles, our final task of the evening was to run a mile (four laps around a track) in less than twelve minutes. That’s not fast for a marathon runner, but for someone like me, who has to alternate between walking and running to cover even one mile, that’s a push. In the first 3 laps, I had paced myself fairly well. Half way through the last lap I could feel myself losing steam. One of the coaches quietly ran over from the sidelines and ran alongside me at the pace I needed to keep to reach the 12-minute goal.

To a person, the coaches and other team members were just happy that I were there and that I was running. Many are very competitive, but mainly with themselves. The primary function of the group was to support individual achievement.

My next eye-opener about running culture came a few weeks later when my wife and I spent a weekend in Los Angeles. Unbeknownst to us, there were two running events scheduled that weekend. The Olympic Marathon qualifying race took place that Saturday; the LA Marathon took place the next morning. We found ourselves spectators for both. Both events attracted thousands of people lining the streets to cheer the runners on. It was an oddly moving spectacle.

Weeks later came the run I had been training for. As expected, I had to alternate between walking and running to complete the course, but I was able to surpass my modest goal for the race by several minutes. There was a sense of of accomplishment as I entered the outfield gate of our local minor league ball park and headed for the finish line at home plate. I expect that to be my peak experience for the day. It wasn't.

After cooling off and stretching a bit, I joined the gathering crowd of spectators in the stands to wait for the half-marathon runners to come in. I was waiting to cheer for my son, his wife, my daughter and her boyfriend, but they were still a couple of hours away. Like the rest of the crowd, I was also there to cheer for everyone else as well. Every runner had the crowd cheer for them as they came in from the outfield, rounded first base and headed for home. There were a few runners that merited special ovations as they completed their 13.1 mile run. There was the 9-year-old boy, the 87- year-old man who ran in sandals, and a woman in her last month of pregnancy. It was both a humbling and gratifying experience to celebrate their accomplishment.

It’s been a few weeks since the event and I am still running. I have signed up to run in another event next week. Does that make me a runner? I don't know. Ask me a year from now.

Trying to be a good runner reminds me of trying to be a good Catholic. The struggle against pain and discomfort to improve is much the same in faith as it is in sport. Finding a way to desire the good of others without measuring their success against yours seems a very Catholic ideal as well.

In the last few months I have seen many of Christ’s teachings illustrated in the running culture. It’s not surprising since this is a group of people working together to better themselves as individuals while pursuing a discipline that they love.

Hmm… There’s a lesson in there somewhere!