Last fall, we were visiting my brother, Joe, who is a novice in the Franciscan Friars T.O.R. As he was preparing us dinner one evening, he brought out a large mason jar containing a dark brown liquid with a creamy whitish, yellow blob floating on top. He ladled some of it into a cup and began drinking it.

“Would you like to try some Kombucha?” he asked.

“No, thanks,” was my reply. The thing floating around the tub looked like some kind of body organ and I was too disgusted to even consider a taste. “What is that thing?” I asked.

Taking it out of the jar for me to gawk at, he responded, “It’s called a SCOBY – symbiotic colony of bacteria and yeast.” He went on to explain how it’s put in tea with sugar to ferment into a wonderful, probiotic drink. Kombucha is touted to have multiple health benefits such as improving digestion, fighting off yeast overgrowth, increasing energy, boosting immunity and even fighting cancer. As a nurse, I knew the benefits of probiotic bacteria and had often made things in the past like Kefir to help boost my family’s immune systems. A lot of my friends had recently begun drinking and raving about Kombucha but I was still skeptical.

My husband, however, decided to try some, and, after adding some lemonade to cut the acidic taste, loved it. He was so sold that my brother sent us home with a “baby SCOBY” so I could start a batch at home. I called it my “holy SCOBY” since it came from the friary.

I must admit I was totally intimidated. I was sure I was going to mess it up and poison my whole family instead of bolstering their health.

However, to my relief, the process was easier than I thought! I found a simple recipe online, bought a large jar with a plastic spout on it and brewed some tea. I added a cup of sugar, allowed it to cool and then poured it into the jar with the baby SCOBY before covering it with a paper towel. I let it ferment for a week and then taste tested it. It had a sweet yet tart flavor and I decided it was ready to be bottled. After pouring it into some upcycled lemonade bottles with re-sealable caps, I let it sit for another three days. As it continued to ferment, it actually carbonated itself! When I finally had enough courage to drink a whole glass, I was surprised at how enjoyable it was! With a little splash of lemonade, it had a nice sweet and sour taste and the family began drinking it every day.

Now I can’t go without it and even pack some when I go out of town. The best part about Kombucha is that as it ferments, it grows baby SCOBY that can be shared. I’ve passed on several little SCOBY babies to friends to start brewing their own Kombucha at home.

As a mom, I know it’s not easy to provide both healthy and enjoyable options to our families. Yet, as a nurse, I understand the value in continuously striving to balance our bodies along with our minds and souls so I wanted to share this easy idea with you.

I hope you consider brewing some Kombucha! If you live near me, I’ve got a whole jar of baby SCOBY to share. 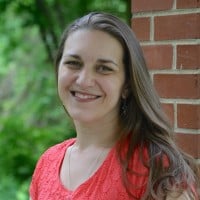 Michele Faehnle is a wife, mother of 4 and a school nurse. In her free time she enjoys volunteering for the church and is the co-chair of the Columbus Catholic Women’s Conference. She is also the co-author of The Friendship Project, Divine Mercy For Moms, Our Friend Faustina and Pray Fully; Simple Steps to Becoming a Woman of Prayer. Read more of her work at InspireTheFaith.com.