Is it getting better?

Mass shooting events like Columbine, Sandy Hook, and now the LGBT nightclub in Orlando stand out as potential watershed moments in our cultural consciousness. Surely when high-schoolers are attacked by other students something must be done. Surely when innocent young children are attacked inside the safety of their own school, something must be done. Surely when a person twice investigated by the FBI for possible terrorist connections buys an assault weapon, something could be done to intervene before more bullets are fired, blood is shed, or bodies fall.

Politics aside, these moments leave us parents with some explaining to do. For my own child (almost 10), Columbine is a memory relegated to a “once upon a time” in history that explains why a school lock-down is done for her safety. Sadly and unbelievably, she has already had a few real ones since she started elementary school. For my generation we just practiced fire drills, though the previous generation might remember the more dubious, but no less dire duck & cover drills.

Sandy Hook was easier for my child to size up. Of course it began more tenderly with her wondering, “Why are mommy and daddy hugging me so tightly tonight?” The short answer, “Something very bad happened to children at an elementary school in Newtown CT.”

It might be harder to wrap our arms around the latest mass shooting at Pulse in Orlando now. There’s too much violence in the world. Too much divisiveness and ugly discrimination in our country right now. This is just too much for me (the parent) or for my child to handle. But something was different this time around. And maybe, just maybe, things are getting better.

After the mass shootings in Orlando, many friends and parents on social media wondered, “How do I talk to my child about this one?” Somewhere in this discussion, they noted, I am going to have to answer the question, “But why? Why were these people attacked?” And somewhere in there the answer becomes “Because there are some people who will point to a Holy Book and say that the God in that book tells them they should do this.”

There is the rub. It's why the landmark statement from Catholic Bishop Robert N. Lynch of St. Petersburg FL who said, “sadly, it is religion, including our own, which targets, mostly verbally, and also often breeds contempt for gays, lesbians and transgender people" is so important to hear and reflect upon. It's why statements from other Bishops as well as Catholic institutions like St. Joseph University and Georgetown make it a point to go beyond just “praying for the victims” as noble as that is. These Catholic voices have said explicitly that they stand with and are allies for their LGBT brothers and sisters, who were the victims of this most recent mass shooting.

A social justice friend of mine asked, perhaps at an ill-timed or in an unintended, but insensitive way, if Sandy Hook or Orlando made a bigger impact on us and why. If I reword his question better, I think the better question is “Did the difference in victims have a difference in your empathy or outrage?”

I know it did for me. As a parent, it was easy to identify with the unbelievable carnage at an elementary school and want to do everything in my power to protect my child and all other children from having something like that happen again. But I told my friend, Orlando hurt me more. Why?

The day before the Orlando shooting I was attending my annual high school reunion at Christian Brothers Academy, an all-boys Catholic school on the Jersey Shore. This wasn’t my reunion year. It was the year of some younger classmates. Oddly, I ended up knowing more people at this reunion than at the two previous. People came this year with their wives or with their partners. And there we were as adults now, enjoying some time in the sun and drinking beer or wine on our old high school campus. Back in the '80s and '90s when we were students, coming out or being labeled as gay had very real, often negative consequences. But among our Christian Brotherhood, it also meant finding your place within this community like any other person in previous and future generations.

I didn’t know Orlando was about to unfold. But in the days that followed, I heard from the LGBT community that here once again was a moment in full public view where they were being targeted. Who would call it out like it is and stand with them? One friend and parent from NYC remarked, "I'm glad I don't have to explain to my 3 y.o. daughter that there are people who want her parents dead." Hearing their ache, I thought about my high school days and about the group that had most recently gathered.

I remembered some younger class men talking to me and some of my classmates. They were thanking us for helping them feel welcome and helping them find a place to belong in the Academy. Some of this was just the awkwardness of being the new kid, or the young freshmen hoping not to be hazed by the mythical giant Seniors. But some of it was also that larger or more subtle world of acceptance. We were all awkward boys when we came into the Academy. Nobody knew how to talk to girls. Some of us were or discovered they were gay. This did not surprise us. This did not diminish our years there or our camaraderie on campus more than two decades later.

I thanked these fine men for their compliments that day because I remembered myself what it was like to be a small person, a minority, in a sea of seemingly indifferent faces, or a potential victim alone in a very big and potentially dangerous world. I have been the stranger, so I have no trouble welcoming them.

[Tweet "I have been the stranger, so I have no trouble welcoming them."] 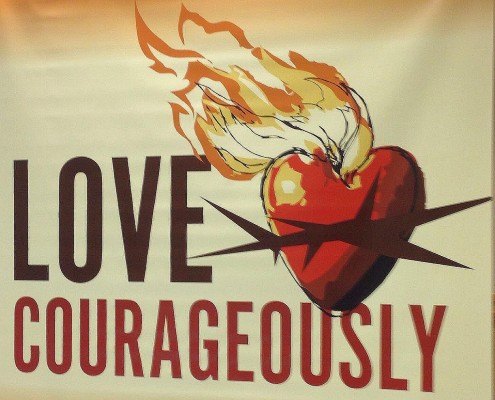 But in the aftermath of Orlando, I wished for more. Were our lives of acceptance and goodwill merely an oasis in a larger world of indifference or active intolerance?

“The Son of Man must suffer greatly…”

I think we lay people and parents know far more about who the victims and vulnerable are in our various settings. We parents experience how goodwill and prayers don’t always cover all the areas in which greater support, protection, or recognition is needed. We also know the gap and ache between the great beauty of our Mother Church and those estranged from her. But at times like these, even when a magic wand cannot pull it all together, it is better for us to remember what we can do to be reconciled to each other.

Those were our children in Sandy Hook who died. As real as I hold my child. Those were our brothers and sisters in Orlando as much as I love my own Christian Brothers. And for wherever else it is that we fall short, that is probably the best place to start.