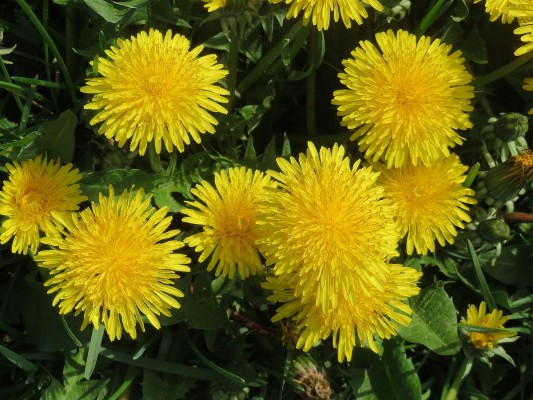 One afternoon we were walking down the block taking my five year old daughter to pre-school when she stopped to pick a dandelion.

“They’re so soft,” she said, twirling the dandelion against her cheek.

“They are,” I confirmed.

“And it’s such a bright and gorgeous yellow,” she said, stretching the word gorgeous out to about twenty syllables.

“Yes it is,” I nodded in agreement.

“Dandelions are beautiful yellow,” she mused, “but it wouldn’t be good if the grass was yellow.”

My daughter’s mind has the ability to jump from one concept to another with the quickness and gravity defying dexterity of a limber mountain goat leaping from rock to rock. Back down on the flat and stable terra firma far below, I’m often left looking up and wondering: how in the world did you get up there?

The upshot is that I usually take the long way around, so I sometimes need a little time to catch up. But when I’d had a chance to turn it over in my mind and imagine all the lawns in the neighborhood transformed to a bright lemon yellow (or dandelion yellow), I had to agree. All that yellow would be oppressive to the senses.

“You’re right,” I said, “it would not be good if grass was the color of dandelions.”

“And it wouldn’t be so pretty if the sky was yellow,” my daughter continued, “and the trees, and all the birds. If everything in the whole world was yellow, that would be kind of ugly.”

As Scripture tells us: “The universe lives and abides forever; to meet each need, each creature is preserved. All of them differ, one from another, yet none of them has He made in vain, for each in turn, as it comes, is good; can one ever see enough of their splendor?” Sir 42, 24-25.

And nearer and dearer to thee and me in the human band of the created spectrum:

from earth man was formed;

yet with His great knowledge the Lord makes men unlike;

in different paths He has them walk.”

to be molded according to His pleasure,

so are men in the hands of their Creator,

to be assigned by Him their functions.

It’s a good thing, too, because if we were all the same then (at least if everyone was like me) no one would be able to sing. That would be no fun at all. So thank you, God, for all the things you’ve made, in all their differences, yellow, blue and green. “The works of God are all of them good”! Sir 39, 16.

[Tweet "Thank you, God, for all the things you’ve made, in all their differences, yellow, blue and green."]