I had wonderful parents. I was a prodigal son.

It is a mystery to me how such good parents could have been blessed with such a bad son as I was. I say was because I am no longer a bad son. I converted into a good son. How that happened is also a mystery. This mystery is also about how I lived through many physically and morally difficult and sometimes dangerous times. A mystery of grace.

In my first book, Effigies in Ashes, I described my journey to Ireland in 1973 to a IRA safe house in Ballinskelligs, a village in County Kerry, called by Irish mystics a thin place where the eternal and temporal meet, I met James McCann, a gun runner for the IRA and he offered me money to take information to Belfast about a shipment of guns he was planning to smuggle into Northern Ireland. I was an army veteran of the Vietnam War and an Irish-American. I suffered from PTSD and was sick in spirit. I met a woman named Madeleine who befriended me. We have reconnected after forty two years. She is married with four grown children. Madeleine cared about me and invited me to her grandmother’s house for dinner with her family. The picture below is of them around that time.

Courtesy of Robert Dagney. All rights reserved. Used with permission.

Their kindness helped heal my spirit. I told her about McCann’s offer and she counseled me to reject it and go home. After she left for her home in England, I continued our conversations in my mind as I walked in the hills around the village. As I did so, she became larger than life and took on another identity who I called “that woman.” I decided to take Madeleine’s advice. I had to extricate myself from that situation. I was kept under surveillance until I left Ireland and went to France to pick grapes until I made enough money to get home. I was guided and protected on that journey by “that woman” or one of her angels.

A few years later, I became an RN and worked as a pediatric rehabilitation nurse, an experience that I described in Effigies in Ashes. I also described my reversion to the Catholic Church and realized that I had not recognized who “that woman” was. 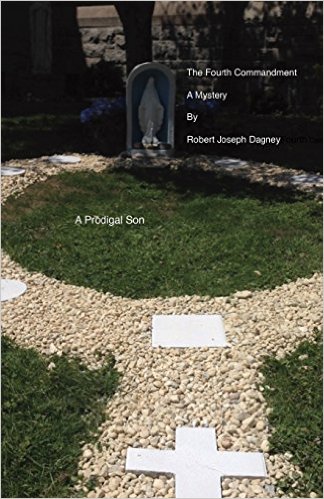 In The Fourth Commandment, I begin with our family bible and some of my ancestral history. I tell of my formative years, my army experience and how I became a prodigal son despite having wonderful parents whose love enabled me to become the good son they deserved. I spent fifteen years working as a nurse in St Catherine’s Infirmary at the Miraculous Medal Shrine. My mother had put a miraculous medal in the bag I took when I went into the army and prayed the rosary for me every day. The cover is a picture of a rosary garden that I installed at St Bridget’s church and dedicated to my parents and my family.