When I arrived in Kraków for the 2016 World Youth Day, I was pretty exhausted, having left Los Angeles some fifteen hours earlier and having had to change planes in Munich. But I was enthused as I approached my first appointment right in the heart of the Old City. Through the good ministrations of George Weigel, the world’s leading expert on John Paul II, I was one of a group of bishops and priests invited to spend time with the original youth group of Fr. Karol Wojtyła.

These were men and women, now in their seventies and eighties, whom the young Fr. Karol had called together at St. Florian’s Church, the parish that still serves the university community in Kraków. He gave them the moniker of Środowisko (meaning milieu or environment), and he took them on camping and kayaking trips in the countryside surrounding Kraków, sharing their lives and subtly training them in Catholic philosophy, theology, and spirituality. This was, to be sure, an act of subversion at a time when the government was attempting to impose a dreary atheism on the Polish people. Over the decades, these young people stayed with Wojtyła (whom they called Wujek or Uncle), and he officiated at their weddings and baptized their children and grandchildren. During his years as Pope, they continued to associate with him, often joining him for get-togethers at Castel Gandolfo and for skiing adventures in the mountains of Italy.

We gathered at a long wooden dining table in a cozy room where, we were told, Fr. Wojtyła had once celebrated Mass. With me were, among others, Cardinal Dolan of New York, Bishop Conley of Lincoln, Neb., and Bishop Paprocki of Springfield, Ill. We spoke of many things: when they first met John Paul, what it was like to be with him, his preferred method of kayaking, the constant warfare with Communist spies and informers, his manner of prayer, etc. While we talked, I kept looking across the room at a bookshelf on which rested a framed photograph of the young Fr. Wojtyła in profile. He had that characteristically warm grin that the whole world would in time come to know, and he wore a pair of what would now be considered pretty hipster glasses. He must have looked like that when he was working with these now elderly men and women—and I just felt his presence there palpably. As the evening wore on, we commenced to hear the cries and songs of the young people who had gathered for World Youth Day coming in through the open windows. How wonderful, I thought, that we were with the core group from which eventually grew this phenomenon. Cardinal Dolan remarked that our friends around that table knew John Paul II long before he was Pope, long before he was Cardinal Wojtyła; they knew him as their parish priest. Never underestimate, he said, the power of a pastor, and never forget the great Gospel principle of the mustard seed.

The next morning, I was taken to a parish on the outskirts of Kraków for a catechesis session with several hundred young people, and that evening I had, I must say, one of the greatest experiences in my thirty years as a priest. At the invitation of the Knights of Columbus, I came to a giant indoor arena on the edge of Kraków, dubbed “The Mercy Center.” I had been asked to lead a Eucharistic procession and benediction and to give a short reflection, but nothing prepared me for what I would see and feel. The place was filled, floor to rafters, with about 25,000 young people, and when the Blessed Sacrament was carried into the arena, everyone knelt down. Then, as the Lord was brought slowly up and down the aisles of the ground floor of the stadium, the music swelled, and young people wept, called, stretched out their hands, and prostrated themselves. Walking right behind the Sacrament, I had a privileged vantage point, and I thought, “This is just what it must have been like when Jesus entered a town or when he processed into Jerusalem on Palm Sunday. Hanging from the rafters, far over our heads, were banners featuring portraits of the great Polish twentieth-century martyrs, Bl. Jerzy Popiełuszko and St. Maximilian Kolbe, stark reminders that following Jesus is always a journey, one way or another, to the cross. I can’t remember another time in the last thirty years when I felt the presence of the Lord more vividly.

[Tweet "At #WYD16: stark reminders that following Jesus is always a journey to the cross."]

The hotel where I stayed during the week, along with most of the other American bishops, was just across the Vistula river from the great Wawel Hill, where the palace of the Polish kings and the cathedral of the Archbishop of Kraków stand. From my window, I could plainly see the bridge over which young Karol Wojtyła ran on the morning of September 1, 1939, when Nazi bombs began to rain over the city. He had been assigned to serve Mass that morning at the Cathedral, and he was frantic to check on the safety of the priest. That awful day, of course, signaled the commencement of Poland’s (and Wojtyła’s) decades-long nightmare of tyranny, persecution, and death. But what young Karol carried in his heart that day was the story of a young visionary nun from Kraków called Faustina Kowalska, who had died just a year before and whose convent was just a few miles from that bridge. It was a tale of the divine mercy. During the terrible night of Nazism and Communism, Wojtyła carried that word in his heart, cultivating like a seed. And when he became Pope, he offered it to the world. Alongside the portraits of the martyrs in the Mercy Center hung a portrait of St. Faustina, and it was her message of mercy that Pope Francis has made central to his own pontificate.

We are passing through a particularly dark moment in the world’s history. But in the wizened faces of the members of Wojtyła’s Środowisko, in the enraptured cries of 25,000 young people in the presence of the Blessed Sacrament, in the serene witness of Poland’s martyrs, and in the mercy, within mercy, within mercy proclaimed by Faustina, I found much ground for hope.

Copyright 2016 Bishop Robert Barron.This article is reprinted with the kind permission of WordonFire.org, where it was originally published. 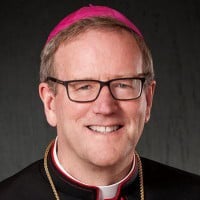