Book Notes: The Confessions of X

The most common question I am asked about my novel, The Confessions of X, is how I came to be interested in the protagonist of the story, St. Augustine of Hippo’s concubine. It all began when I was twelve and a pupil at Loreto Convent School in Manchester, England.

I remember putting up my hand and asking Sister Bernadette who this unnamed woman was in the Confessions, the woman Augustine had loved and with whom he had raised a son. She replied: “No one knows. She is lost to history.”

That phrase, “lost to history,” stuck with me. I thought: so many great women are lost to history, eclipsed by the lives of the men they loved. So, forty years later, I decided to go looking for the concubine so she could tell her story.

Aside from the enormous amount of research that this novel required, the biggest challenge in writing about the concubine was not so much the point of view—early on I realized it had to be first-person in order to complement the first-person of Augustine’s own memoir—but what tone to take.

How would an illiterate, low-born woman from the ancient world of Africa Province speak about someone as literate and urbane as Augustine? And what would her attitude be to him and to his mother, St. Monica?

Would she be bitter or forgiving? Merciful or vindictive? And how on earth could she speak with an intensity of emotion and richness of classical reference if she were, as was probable, illiterate?

I also wanted to avoid writing a hagiographical novel about Augustine told by the “little woman.” That would demean X.

At the other extreme, I was determined that X would not become a shrill feminist voice castigating Augustine for his cruelty and callous career moves. It seemed to me that either of these characterizations would fail to do justice to the complexity of such a woman and would only serve to marginalize her further.

Eventually it came to me that the lover of the most eloquent and literate man of his age would surely have had the opportunity to learn to read and write. The same day this hit me, I sat down and wrote chapter one straight through. After 1500 years, X had a voice. 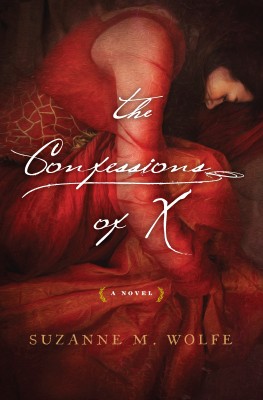 Now I realize that the word “concubine” is a loaded one to modern ears, but in Augustine’s time a concubine was the equivalent of a common law wife (when a man and women were of different social classes). In fact, Augustine was faithful to X until the time it became clear that he would need to marry a prominent Roman citizen’s daughter in order to advance his career (this was before his conversion to Christianity).

In the Confessions, Augustine writes: “the woman with whom I had been living was torn from my side as an obstacle to my marriage and this blow crushed my heart to bleeding because I loved her dearly.”

Recent history has often judged Augustine harshly, portraying him as a kill-joy lecturing primly against sex. He has also been accused of being a hypocrite for having enjoyed an illicit relationship for years and then preaching about chastity.

But the Confessions is not the summation of Augustine’s thought and life—it is merely the beginning of his journey.

It is worth noting that in the Middle Ages, Augustine was regarded as the Saint of Love and is often depicted in paintings holding a large red heart encircled by flames. Today, we tend to see him puritanically wagging his finger at us. Augustine would have roared with laughter at this. He was a passionate, fiercely intelligent, humorous man with a gift for friendship. It seemed to me that only a similarly remarkable woman would have fallen in love with such a man.

About the author: Suzanne M. Wolfe grew up in Manchester, England and read English Literature at Oxford University, where she co-founded the Oxford C.S. Lewis Society. She is Writer in Residence at Seattle Pacific University and has taught literature and creative writing there since 2000. Wolfe is the author of Unveiling: A Novel(Paraclete Press, 2004). Twenty five years ago, she and her husband, Gregory Wolfe, co-founded Image, a journal of the arts and faith. They have also co-authored many books on literature and prayer including Books That Build Character: How to Teach Your Child Moral Values Through Stories (with William Kirk Kilpatrick, Simon & Schuster, 1994), and Bless This House: Prayers For Children and Families (Jossey-Bass, 2004). Her essays and blog posts have appeared in Image and other publications. Wolfe is currently working on a series of mystery novels set in Elizabethan London. She and her husband are the parents of four grown children. They live in Richmond Beach, Washington. Learn more about Suzanne's work at her website and Facebook author page.