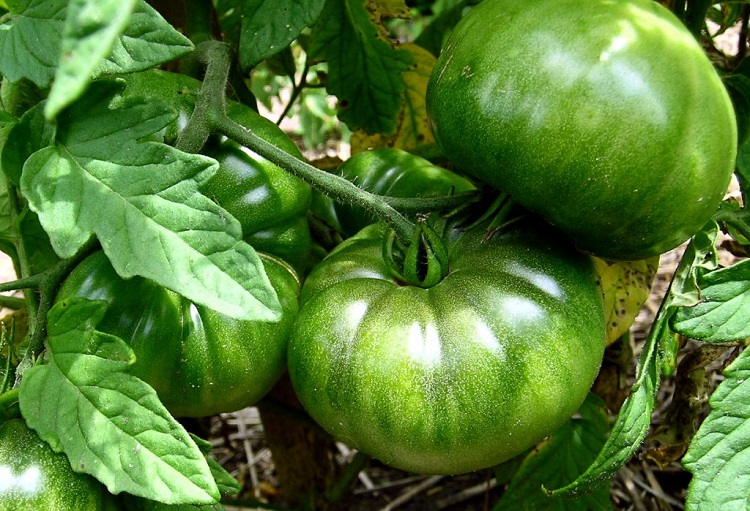 Whether you grew them yourself or bought them by the bushel, preserving ripe tomatoes often includes saucing, canning or freezing, and if green, pickling. That distinctive flavor of fresh tomatoes is enjoyed well after the harvest has ended.

By late September the garden season draws to a close and some of us are left with an abundance of green tomatoes. Here is a way to ripen or store some of those garden-grown tomatoes into the winter.

When it comes to ripening green tomatoes, the most common mistake folks make is to place them on a windowsill. The skin on a tomato will become tough when sunlight shines on the fruit. A better way to ripen green tomatoes is to place one or two of them inside a brown paper bag on the table, wrap them individually in newspaper, or set them in an enclosed space, such as a cardboard box—though not in a plastic lidded container. Ripening them in this way they remain out of direct sunlight, are able to release ethylene gas—as most fruits and vegetables will—and remain at a steady temperature.

Before the first frost, pick all of the green tomatoes remaining on the vine, thenremove and discard vines from the garden. Sort the tomatoes carefully. Those that have a slight blush allow to ripen out of direct sunlight; these are often ready to eat within two weeks. The small hard fruits, and the larger tomatoes that are blemished, can be pickled or made into salsa.

Unblemished and firm green fruits can be readied for storage. Take these tomatoes and rinse them, individually, under cold running water. Place them, blossom end up, on a clean towel. Once thoroughly dry, they can be set into boxes.

I have used a sturdy banana box, with the interior of the box lightly misted with a 10% vinegar solution and then allowed to dry. I then lined the box with newspaper (avoiding glossy colored pages), nested each unblemished tomato—blossom end up—in its own piece of crumpled newspaper, and then lined them up in the bottom of the box. With the blossom end slightly exposed it is easy to tell which tomatoes have ripened enough to use first.

You can place a second layer of tomatoes in the box by using a lattice packing pattern to prevent crushing. Use another layer of newspaper in between and on top. Some folks who put food by prefer that each individually wrapped tomato have a 2" space around it.

My boxes of tomatoes was stored in a cool basement, at about 60-65 degrees, on a shelf away from heat. I do not recommend an unheated garage or porch because of the chance of freezing. Storing them anywhere between 55-65 degrees works perfectly fine.

It is inevitable that a couple of tomatoes will begin to rot as winter progresses. Place extra newspaper under the storage box in case you miss one that turns watery. When you weekly check your tomatoes for ripeness also inspect them for soft areas or dark spots. By removing fruit beginning to spoil you will prevent any diseases from spreading to the whole box.

[Tweet "Tomatoes in January, even in colder climates? @realym shows you how!"]

By following these few steps, it’s not uncommon to eat a garden tomato in January!