Marriage: The Teeter-Totter of Life 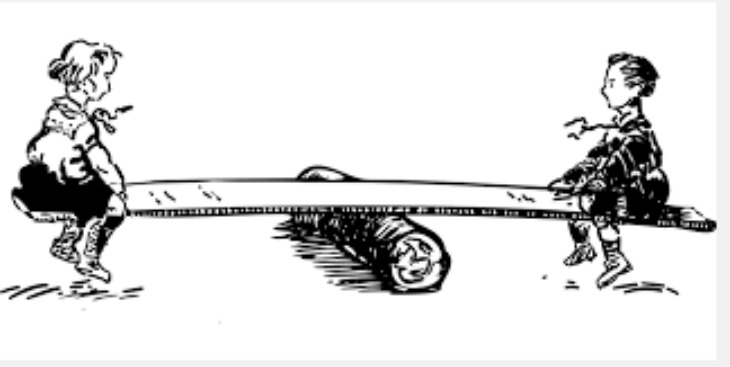 Image via Pixabay, CC0 Public Domain.
In marriage, when we change ourselves, our mates change. When we quit controlling and demanding change, our better half is free to change.There is nothing more damaging to a marriage than when one partner is a self-righteous, suffering Catholic martyr. Christ is powerless in the face of such pride; He is free to heal when both the good- and bad-looking partners come before Him with a humble and contrite heart.
For example, at first glance, my friend's marriage seemed awful and Victoria* looked like a suffering saint. True, due to her low self-esteem and victim complex, Victoria was in an emotionally abusive relationship. Bernie*, her husband, did love her but he was a miserable man, struggling with cancer and the progression of M.S. In an attempt to dull the effects of depression, Bernie drank. In addition, he resorted to verbal abuse, venting his pain on poor Victoria.
Yep, Bernie looked like the bad guy sitting on the low end of the teeter-totter; Victoria seemed to be the perfect, suffering saint, running the household and holding everything together. Look again!
[Tweet "In marriage, when we change ourselves, our mates change. H/T @mjmjuneau"]

The teeter-totter shifted. Victoria injured her knee and suddenly, bam, she was on the low-end of the teeter-totter. She did not like it one bit. She did not want to accept this shift in power. Frantically, this good, little wife tried to stay in charge of her realm by hobbling around her house in order to do all the chores. of course, Victoria finally broke down in tears and asked her husband for help.

Bernie responded to her requests! At first, Victoria only asked if she was desperate but soon, without being asked, Bernie was the one to pick up the morning paper at the corner, make his wife a cup of coffee and even cook dinner. Victoria bemoaned the fact that her kingdom has crumbled and struggled to accept help. Yet, as she did, Bernie continued to rise even higher on the teeter-totter. The balance of power has shifted.

The biggest surprise of all is that Bernie drank less and less every day. Without his wife’s constant nagging or silent disapproval, Bernie was now free to change.

The teeter-totter of life.

It Takes Two To Tango

Husband and wife react to each other by triggering positive emotions or setting off volcanic eruptions that are rooted in old wounds, often from childhood.

No one is always the bad abuser.

No one is always the helpless victim.

Both partners are part of an intricate dance because it really does take “two to tango.”

Copyright 2016 Melanie Jean Juneau
Author's note: The names and situations in the couple's story above have been changed to protect their privacy.