Sunday of the Four Popes

A few days ago, we celebrated the feast of Pope St. John Paul II, and I can’t think of another man who captured the minds and hearts of the world in the last century the way he did. His face is as familiar to most of us as our own parents’, isn't it?

In the spring of 2014, when I was studying abroad in Rome, I had the great blessing of attending his canonization Mass. I wish I could give you tell you a story of a calm, dignified experience of a solemn moment. Maybe that’s what the TV coverage showed! But for those of us on the ground, the chaos started about eighteen hours before Mass…

We camped out on Via Conciliazione just before the gates closed for the night, about 5pm. The Italian police were keeping everyone well away from the basilica, until the wee hours of the morning when (we were told) they’d let the crowd flow up the street. We didn’t worry, since we’d staked a claim close to the gates.

Huddled up together with half a million other people, we waited out the rain and the twilight with Nutella and about a thousand rounds of “Country Roads.” Some poor souls in our group even tried to study for Monday’s theology final.

One friend and I had had the bright idea of livening our experience by surprising the group with a few pints of gelato; so mid-evening, we made an excursion back to the apartment to get the treat and spoons. Come to find out, just after we left the group, there was a false alarm about the gates opening, and crowd had surged toward the entrance. People were packed in like sardines for a half-mile back to the Castel Sant’Angelo.

Well, my friend and I were utterly embarrassed for our real reason for leaving. But we’d stopped at the restroom in the apartment, so we decided that was as good an excuse as any. Never in my life have I had to explain to so many people that “we went to the restroom, and then the crowd moved, and we're just trying to get back to our group.” Do you know how territorial the Poles get when they think you are trying to get between them and their Pope? If it weren’t for the occasional handful of very sweet people (mostly women, and my prayers be always with them), we’d have been stranded. I still wonder we might have gotten through faster if we’d just bribed them with that gelato.

Anyway, not ten minutes after we’d found our people again, the ever-reliable Italian police really did decide to open the gates, about five hours early. A cattle stampede in an old Western might be a decent comparison. I remember one agonizing, horrible moment when I looked around and felt utterly alone in the pushing, shoving, agitated crowd. Thank heavens, my friend found me, and we struggled on together, in a warped sense of responsibility still carrying a melting container of gelato and the apartment’s spoons.

Flash-forward to the wee hours of the morning. The crowd kept at an awkward, semi-rhythmic pace: move forward three feet, stop, stand for a while, give up, curl up into a little ball around your backpack and try to sleep, until the crowd rustles forward again. I’ve never known misery quite like 3 a.m., thigh muscles aching from being balled up on my backpack, despairing, and realizing that the sticky wet feeling all down my jeans was from a tipped container of melted gelato. At that point, Pope St. John Paul II could have been coming down from heaven himself and I’d traded the vision for a shower and my bed. The container of gelato was promptly abandoned in the middle of the street, and I have no compunction over the loss of those spoons. 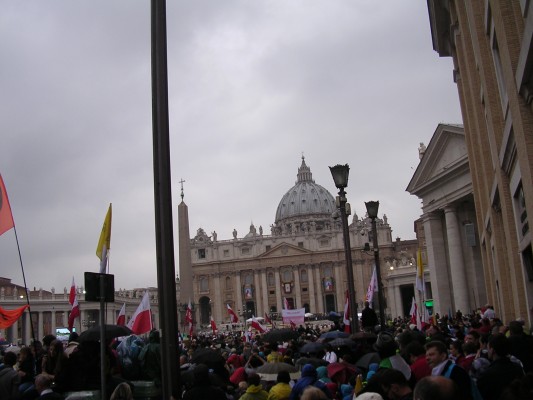 As the hours wound down, and we inched closer to the Vatican, we fought the Poles for a decent place to stop for the Mass. The morning is still mostly a blur in my memory, but somehow we ended up just inside the outer piazza, with just a square foot or two to stand on. We were so tired we could have passed out, but who wants to give up when the Sunday of the Four Popes is just a few hours away?

And indeed, in time, we were there for the solemn proclamation of Popes John Paul II and John XIII’s sainthood, read out by Pope Francis and witnessed also by Pope Emeritus Benedict XVI. There aren’t many words that adequately describe the tearful rejoicing of the 500,000 who at that moment were the universal Church in her most united. No matter how many hours you’d been standing, that moment was worth it.

While I’m okay if I never hear Polish spoken in my hearing for about another ten years, I’ll never forget the graces of that day in Rome. I learned to trust in God, when my own strength was failing. I learned patience, with others and with my own limits.

Ultimately, I learned that the virtue of one man impacts the whole world; and that you really can be friends with a saint. I rarely call on St. John Paul II, but in the back of my head I know that if ever I need him, he’s there. I committed to him that day of his canonization, and I’m certain he’ll remember me.

Besides, he still owes me a good night's sleep.