On Dorothy Day and Radical Catholicism

In his visit to the United States, Pope Francis tipped us off, during his speech to Congress, on an American Catholic whose point of view and dedication to the Gospel scratches us right where we itch:

“In these times when social concerns are so important, I cannot fail to mention the Servant of God Dorothy Day, who founded the Catholic Worker Movement. Her social activism, her passion for justice and for the cause of the oppressed, were inspired by the Gospel, her faith, and the example of the saints.”

Cardinal Timothy Dolan echoed the praise of Day in an interview that appeared in the New York Times:

“I am convinced she is a saint for our time. She is what’s best in Catholic life, that ability we have to be ‘both-and’ not ‘either-or.’”

Dorothy Day would have quickly responded to this sort of praise as she famously did on many different occasions during her lifetime:

“Don’t call me a saint. I don’t want to be dismissed that easily.”

Despite her reluctance, she definitely is a saint for our times. In a day where the poor are cast aside in what Pope Francis has called our “throwaway culture,” Dorothy Day provides us with an example that can truly be referred to as Radical Catholicism. 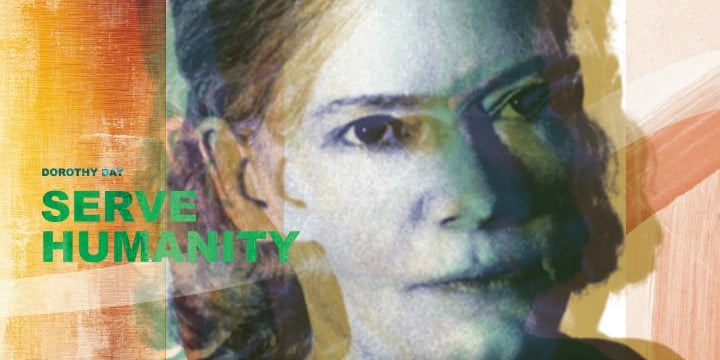 She lived a life motivated by the teachings of Jesus most succinctly stated in the Sermon on the Mount, and did so in a way that continues to inspire people down to the present day. Her presence is perhaps felt the strongest among the Catholic Worker Movement, as they continue to help the poorest of the poor around the nation, not to mention their work to bring about peace and justice for all who do not have a voice.

What’s more, Dorothy provides us all with a striking challenge to the Comfortable Catholicism that has become all too common. In an age where we are consumed with the temptation to gossip, look down on others, and avoid helping those on the periphery, she is there to challenge us all with this life-changing reminder:

“I really only love God as much as I love the person I love the least.”

As much as I am inspired by Dorothy Day’s political passion, her amazing ability to help the less fortunate, her embodiment of Catholic social teaching, and her example of how to a true disciple of Jesus in the current culture, it is this challenge of hers that I appreciate most.

There are plenty of people I fail to show love to, plenty of folks I would rather not deal with. This simple reminder, that I only love God as much as I love the person I love the least, speaks to me as a serious call to action.

If I’m planning on showing up to the pearly gates and walking right on through, I had better make sure I make more of en effort to love everyone, especially those who I have a tendency to love the least.