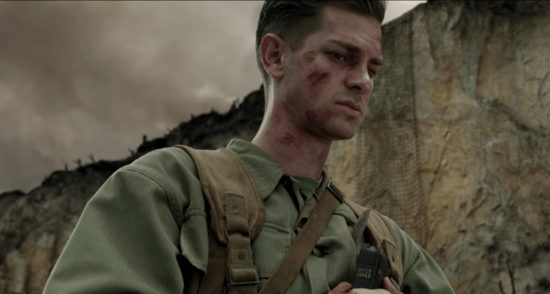 Be forewarned: you won't have any time at all to settle in before you begin cringing if you go out to see Mel Gibson's directorial return in HACKSAW RIDGE, which opens in theaters this weekend.

For the minute the previews end, you'll want to stow your popcorn and guard your stomach. But by the end of this amazing retelling of the true life story of WWII Medic Desmond Doss, you will have discovered why all the blood and guts devastation in this film is worthwhile. 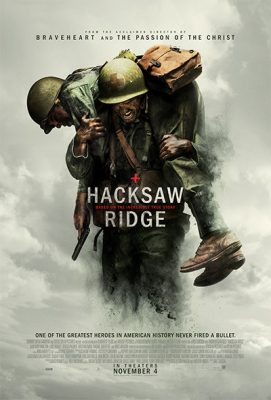 HACKSAW RIDGE is the extraordinary true story of WWII medic Desmond Doss, played by Andrew Garfield (The Amazing Spiderman), who, in Okinawa during the bloodiest battle of WWII, miraculously saved 75 men in a matter of hours without firing or carrying a gun. He was the only American soldier in WWII to fight on the front lines without a weapon, except the simple prayer he uttered before he single-handedly evacuated the wounded from behind enemy lines, under constant enemy gunfire and artillery bombardment. Doss’ courage and faith won the admiration of his commanders and fellow soldiers, as he saved the lives of the very men who had persecuted him for refusing to carry a gun. He believed the war was just, but to kill under any circumstance was wrong. Doss was labeled the first conscientious objector (he called himself a “conscientious cooperator” as he volunteered) to receive the Congressional Medal of Honor. Hacksaw Ridge is directed by Mel Gibson (Braveheart, The Passion of the Christ) and also stars Sam Worthington, Luke Bracey, Teresa Palmer, Hugo Weaving, Rachel Griffiths and Vince Vaughn.

HACKSAW RIDGE recounts the story of Desmond Doss, a conscientious objector whose faith (Seventh Day Adventist) morally prevents him from holding a gun, but not from serving his country in time of war. Although his decision to serve as a medic may seem contrary to reason, from the film's outset you will fall in love with Desmond, so soulfully portrayed by Andrew Garfield. Desmond's is a faith not only shared with him by his parents (one of whom is heartbreakingly flawed by his own war nightmares), but more importantly chosen and lived out despite tremendous challenges.

A lovely aspect of this film which is not lost amid the gore is LOVE: love for one's family, love for one's country and ultimately love for God. Through Desmond's eyes, we receive a master course in all three. Along with Garfield's fantastic portrayal, you'll enjoy strong performances by the entire cast. My favorites were Teresa Palmer's "Dorothy" (Desmond's beautiful--inside and out--love interest), Vince Vaughn as Sergeant Howell (whose humor offers a bit of a reprieve) and Sam Worthington as Captain Glover (a commanding officer who is humble enough to eventually be led by his soldier).

HACKSAW RIDGE is not an easy movie to watch. But I'd argue that it IS an important movie to watch and contemplate. In an age where warfare has become perhaps easier for us to tolerate as technology has developed and made violence feel more clinical, this film reminds us of what it means to serve with valor but also with the strength of one's convictions.

You will squirm as you watch this movie, both physically and emotionally, because Desmond's story will challenge you to look at your own courage. You will ask yourself if you would be willing to do whatever it takes to "please help me get one more". And Desmond, who was a real man with a real story, will encourage you within the context of your own "wars" to dig deep and to always lean in to the power of God's love.

Rated R for intense prolonged realistically graphic sequences of war violence including grisly bloody images, this film has not yet been rated by the Catholic News Service.