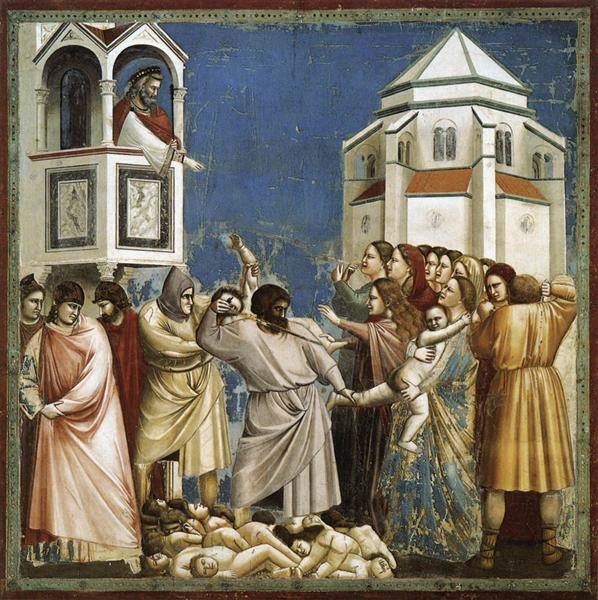 "The Massacre of the Innocents" by Giotto (1305) via WikiArt, Public Domain.
We're done with the maelstrom of holiday parties and frantic gift shopping; we've scavenged the after-Christmas sales; we've recycled the wrapping paper. And hopefully, we are experiencing some sense of peace after our Advent preparation and the Savior's arrival. This week of the Christmas Octave is a renewed opportunity for grace, and as the Saints accompanied us on our journey towards Christmas, they also join us to rejoice in the Christ Child.
These last few days of the calendar year celebrate several jewels of our Church's history. We meet St. Stephen, the first to shed his blood after the Crucifixion; St. John the Beloved, still close to his Savior; St. Thomas Becket, heroic bishop and martyr. Finally, we honor the Holy Family, and the little-known Pope St. Sylvester slips in on the 31st, before we turn our focus to the Solemnity of Mary, Mother of God.
[Tweet "The Church's first and youngest martyrs: Holy Innocents. By @catholiclitgeek"]
And in the middle of this week on December 28, we find the littlest martyrs surrounding the child-God, the Holy Innocents. In the New Testament, their biography stands out like a horror movie at a children's party. St. Matthew describes the bloody sequel to the Magi's visit:
Herod perceiving that he was deluded by the wise men, was exceeding angry; and sending killed all the men children that were in Bethlehem, and in all the borders thereof, from two years old and under, according to the time which he had diligently inquired of the wise men. Then was fulfilled that which was spoken by Jeremias the prophet, saying: A voice in Rama was heard, lamentation and great mourning; Rachel bewailing her children, and would not be comforted, because they are not. (Matt. 2:16-18)
All our motherly instincts leap at this tragedy, when the innocent are made to suffer at the whim of a selfish, cruel king. It's easy to read this story and turn away in repulsion. Why should Holy Mother Church force us to contemplate the death of children, immediately after the birth of the Christ Child?
The answer, or one answer, is given by Venerable Fulton J. Sheen in his (highly recommended!) Life of Christ:
Before Christ was two years of age, there was a shedding of blood for his sake. It was the first attempt on His life. A sword for the Babe; stones for the Man; the Cross at the end.  that was how His own received Him. Bethlehem was the dawn of Calvary. The law of sacrifice that would wind itself around Him and His Apostles, and around so many of His followers for centuries to come, began its work by snatching these young lives which are so happily commemorated in the Feast of the Holy Innocents. ... 'The world will hate you,' Christ promised all those who were signed with His seal. These Innocents died for the King Whom they had never known. Like little lambs, they died for the sake of the Lamb, the prototypes of a long procession of martyrs--these children who never struggled, but were crowned. ... The murder of the Innocents by Herod recalls Pharaoh's slaughter of the Hebrew children.
All of these Jewish children would have been brought up with the knowledge that someday, God was going to send His Messiah. He would be "Wonderful, Counsellor, God the Mighty, the Father of the world to come, the Prince of Peace" (Isaiah 9:6). He would free the world from darkness and Israel from her slavery. What greater death could any Jew ask than to sacrifice himself for the safety of his Messiah? The boys of Bethlehem became a link between the Hebrew firstborn of Moses' day, and the myriad of Christian children who, even today in the Middle East and the Holy Land, refuse to renounce their faith even in the face of death. Despite being younger than the age of reason, by the fact that they literally died for the sake of Christ, Holy Mother Church gives them the same honors as St. Stephen and all the other heroes of our Faith.
In our own lives, we are told that to follow Christ and see God, we must pick up our crosses, and at the same time "become like little children." The Holy Innocents did both, and their example can encourage both us, and our children, to greet the newborn King with heroic faith and a desire to serve Him with all our hearts, minds, and souls.
Copyright 2016 Rebecca Willen

Rebecca W. Martin, a trade book Acquisitions Editor for Our Sunday Visitor and Assistant Editor at Chrism Press, lives in Michigan with her husband and too many cats. A perpetually professed Lay Dominican, Rebecca serves as editor for Veritas, a quarterly Lay Dominican publication. Her children’s book Meet Sister Mary Margaret will release in fall 2023 from OSV Kids.

Adventures of a Rosary Family: Out of the Pit
Read
Living as though Heaven Were Opened
Read
Reflection for the Feast of the Holy Family: Called to the Heights of Holiness
Read