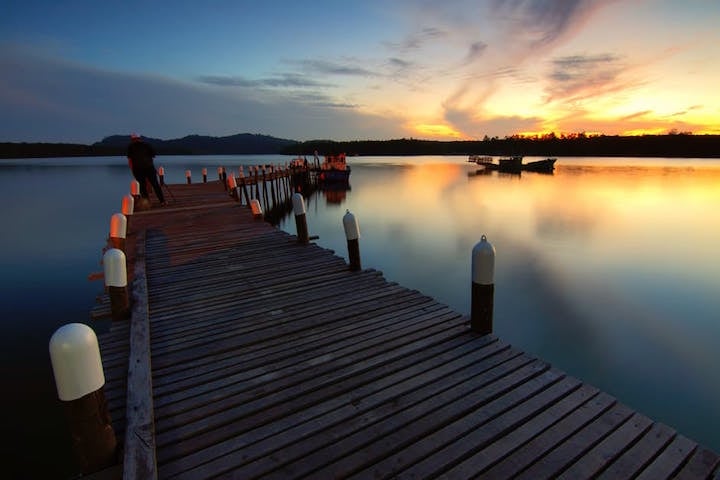 Jesus immediately knew in his mind what they were thinking to themselves, so he said, “Why are you thinking such things in your hearts?” Mark 2:8

There he stood on the end of the pier with a fishing pole in one hand and an iPhone in the other, rapping aloud to the lyrics of the vulgar, violent music emanating from his electronic device. The sun was beginning to set and I was craving a moment of quiet, contemplative enjoyment of the multi-hued evening sky. Quickly concluding it wasn’t going to happen, I began to leave, but not without rolling my eyes and engaging in a mental rant about how angry, demeaning and offensive his music was.

When I found my husband Mark on the way back to our condominium, he asked why I wasn’t on the pier enjoying the sunset.

“There’s a young man blaring rap music at the end of the pier and he’s oblivious to the fact that the people around him want to enjoy the sunset in peace,” I huffed.

A minute later we reached the end of the pier and Mark quickly launched in.

“You catching anything?” he asked as I waited for him to address the issue of the music.

“No, man, I’ve been here for three days and haven’t caught one fish yet,” the young man responded.

“Maybe your music is scaring them away,” I said wryly.

“You been out here the whole time?” Mark continued.

“Well other than yesterday when we drove to Key West,” he answered.

“Oh, how’d you like Key West?” Mark inquired. “We were thinking of driving there tomorrow.”

“It was horrible,” he responded without hesitation. “All day in the car with my Mom and step-dad fighting the entire way. Two hours there and two hours back with him picking on her the whole time,” he began to open up. “And you know what they were arguing about? The way I was dressed! He didn’t like the way I was dressed and he fought with her the whole day over it,” he said with evident hurt and exasperation as the rap music drummed on.

Hearing his angst, I immediately felt sorry for the young man and understood a little more clearly what his music expressed for him. I suddenly wanted to ask him a million and one questions about his life…starting with: “Where is your dad?” Instead, I asked if his name was James, noting that he was wearing red and white a jersey with the name “James” on the back.

“No, my name’s Darrien,” he laughed. “Lebron James is an NBA star,” he continued. “You haven’t heard of him?”

“Oh,” I smiled feeling embarrassed. “I don’t watch much basketball.”

“Well nice to meet you Darrien,” Mark interjected. “I’m Mark and this is my wife, Judy.”

As the conversation continued between the three of us to the beat of the rap music, it quickly became obvious that Darrien was a good kid with a load of frustration about his family situation. He was friendly and thoughtful—and a 16-year-old basketball player at a nearby Florida high school.

“Hey Darrien,” Mark offered as the sky blushed red, orange and pink. “You like Andrea Bocelli?”

Before I knew it we were standing on the end of the pier watching a magical sunset, listening to Andrea Bocelli’s “Dare to Live” and enjoying a nice conversation with our new friend Darrien—who was more than a little eager to share about his life and its frustrations. In fact, it was clear that all the poor child really wanted was to be seen, heard, and blessed for who he is.

[tweet "Meeting a teen who only wanted to be seen, heard and blessed for who he is. By @jklein60"]

“I gotta go,” Darrien said after a few more casts into the Atlantic garnered no bites. “I tried your music,” he smiled pleasantly as he walked off. “Now y’all should try rap.”

Copyright 2017 Judy Klein.
This article previously appeared at Aleteia and is reprinted here with kind permission.