How A Return To Traditional Conservative Values Transformed Franciscan University 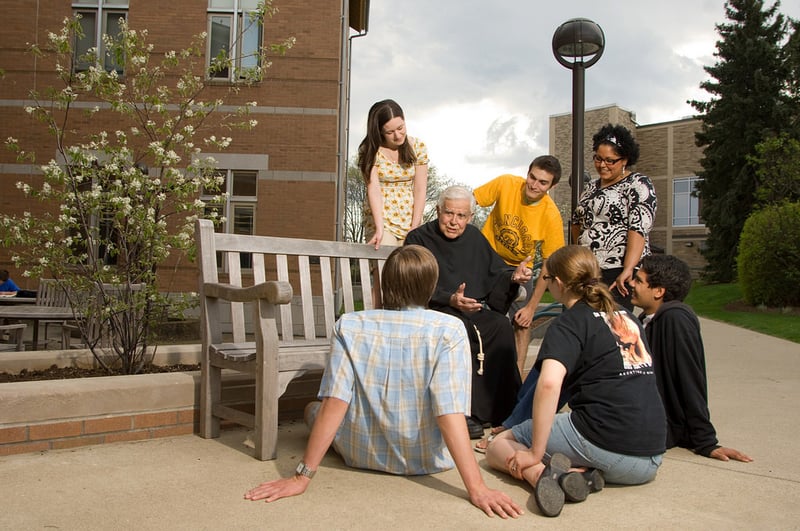 Even in death, the memory of someone great lives on. For Fr. Michael Scanlan, that memory is lived out through the love and service of the many students he profoundly influenced at Franciscan University. Perhaps you knew him personally or perhaps you know some (great person) who went to the University he transformed! Maybe you were inspired by one of his books or talks, and maybe you are just now becoming inspired to pick one up. Whatever the case, I would like to step away from who he was for a moment and focus on what he did--particularly in light of recognizing the presence of loneliness and the absence of faith and reason devastatingly present in young people.

[tweet "The story of a university president who recognized students' loneliness at the core of their problems."]

If you, for instance, went away to college harboring loneliness and become more lonely, or disillusioned and fell further from your faith, you truly were not well served. The understanding of original unity and the existence of objective moral truth dispel loneliness and uncertainty as much as empower a young person with direction and moral clarity. This is truly owed to all youth, and should be most accessible on a college campus.

The year was 1974 and the College of Steubenville in Ohio was on the brink of closure. Funds and attendance were dwindling, academics were poor, and the College began to gain a reputation as a party school. It was at this time that a former Dean and Theology lecturer at the College, Fr. Michael Scanlan, TOR, was appointed president. Revival of the school's academic value and reputation seemed hopeless as it struggled through the next few years of his presidency, drawing the smallest incoming freshman class in the school's history and the loss of at least five top administrators.

The trend in higher education at the time was beginning to lean toward catering to students' entertainment and freedom in order to increase interest and attendance, rather than re-focusing on core values and stricter discipline in order to achieve advancement. Fr. Michael, a Harvard-educated lawyer and Staff Judge Advocate in the U.S. Air Force before becoming a priest, met the financial, academic, and morale challenges of the school from a different perspective.

He discovered primarily a deep underlying element in the life of the college student – an ubiquitous loneliness that influenced all other areas of campus life. This loneliness could not be satisfied by better amenities or greater distractions, but had to be addressed directly and remedied. His solution was the development of small faith-sharing groups, focusing on the positive compassion of family life, yet offering the fraternity of brotherhood and sisterhood. The formation and engagement of these households immediately began to transform the attitude of the College. To date, currently 45% of the undergraduate population participate in one of the 50 households available on campus.

Fr. Michael's momentum didn't stop there. With a clear and established emphasis on faith and reason, he was able to move beyond improving the interior life of the students and morale of the campus to developing nine new intellectually competitive undergraduate programs, including nursing, communication arts, computer science, economics, and the largest undergraduate Theology program of any U.S. Catholic Institution.

The College of Steubenville officially became a University in 1980 due to Fr. Michael's establishment of several growing and successful graduate programs ranging from education and counseling to business, nursing, administration, Theology and philosophy. As well, a highly attended study-abroad program was developed, in which students were given the opportunity to experience a culturally rich semester of education in a beautifully restored 14th-century Carthusian monastery in Austria, for nearly the same tuition as a semester on campus.

Franciscan University of Steubenville, as it became known - the former party school in decay and financial ruin, was now thriving and gaining a steady reputation for academics, virtue, and spiritual enrichment. University professors and leadership also underwent an overhaul over the years, with the institution attracting dedicated educators of traditional conservative values, and even became the first U.S. Catholic University whose priests and Theology professors willingly took a public Oath of Fidelity to the teaching authority of the Church and the preaching of dynamic orthodoxy.

Perhaps another most unusual element of Franciscan University is the incorporation of a program for young men desiring to answer the call to priesthood, studying alongside the rest of their collegiate peers. This heavy influence on the search for something greater than oneself and the willingness to sacrifice and serve others has produced countless graduating classes of extraordinary men and women whose experience is vastly different than most achieving a higher education degree. These qualities have served them well in business, family-life, service careers, higher education, as well as the more than 700 alumni who have entered religious life. The natural competitive nature of students previously unchallenged, has been awakened and with it the desire to excel in an overall betterment of self – pushing themselves in virtue, goodness, and charity.

This legacy is due to one revolutionary man whose focus went far deeper than appeasing those in equal position, falling in line with the trends of contemporary higher education, or settling for less than the highest potential of every priest, staff, and young person he ever met. Fr. Michael Scanlan, TOR, who passed into eternal rest January 7, 2017, reformed the structure and establishment of Christian higher education, but will be remembered most for his fatherly compassion, spiritual and interior rigor, and joyful trust and persistence in the Lord.