Family Games - Come Sail Away With Me

Francis Drake was an English sea captain who carried out the second circumnavigation of the world. He was knighted by Queen Elizabeth I in 1581 and was second-in-command of the English fleet against the Spanish Armada, which made him a hero in England and a pirate in Spain. Eagle-Gryphon Games took this theme and re-created it in a worker-placement game. In this game for 3 to 5 players (age 14+), players will attempt to mimic his three voyages to the Spanish Main. The game takes 90 to 120 minutes to play and retails for $80, but you can find it most places for $50 to 55. 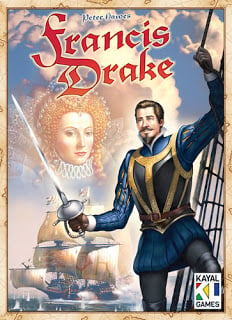 Francis Drake is a very interesting worker placement game mainly because of the "one-way street" twist on worker placement, which is similar to Tokaido. When you are deploying your workers, you must carefully look at all the options and decide beforehand what you want to acquire, who you want to visit, what you want to accomplish, and in what order, because once you pick a spot to go, you can't go backwards on the street to claim a spot you or other players skipped. This adds a bit of tension to your decisions as well. Do you claim the next available spot, even if it's something you don't really need in hopes of grabbing something else right after this spot? Or do you jump really far ahead on the street and forgo some good stuff for a really great spot? In addition to the one-way street, there's also a press your luck element to the worker placement. Do you take one more round, grabbing another spot, or do you end your gathering (perhaps slightly prematurely) to be the first in line to explore?

The game is very fun to play and provides for a lot of interesting decisions. What I like best about the game is the components. The artwork looks era-appropriate. The ships, even though they are plastic, are of a nice weight and were made from a good mold, because they have good detail and a great fill to them. What I like best are the cardboard treasure chests, which when assembled are very cool-looking and serve two purposes: function and aesthetics.

There were a couple of downsides to the game. The first one is game length. It does take about 90 minutes to 120 minutes to play and that's a little more time than my group is willing to invest in a game usually. The second downside is the player count. It plays 3 to 5 people, and my two normal player counts are 2 and 6. Thankfully, there is an expansion that fixes this exact problem. So if you are looking for a medium-weight, historical worker-placement game, consider this one! 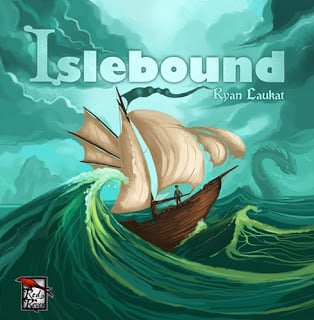 Ryan Laukat is one of my favorite game designers. He creates the game, writes the stories, does the art, runs the company, and probably mops the floor and takes out the trash too! The man is a genius and his games are always beautiful and take you into a fanciful and evocative world. Today, I am reviewing his game Islebound, a sea-faring game for 2 to 4 captains, ages 13+! It takes 60 to 120 minutes to play and retails for $50. Islebound takes place in an archipelago (group of islands in layman's terms) that has busy towns, ferocious sea monsters, and of course pirates! You will command a ship, sail to the different island towns, and increase your renown by use of force, diplomacy, or business. The captain with the most renown (wealth, buildings built, and reputation) at the end of the game is the winner.

Islebound is a game that takes place in the same world as Ryan Laukat's smash hit Above and Below. Like Above and Below, there are citizens to acquire which can give you special abilities and buildings to purchase which can provide you with endgame points. Unlike Above and Below, which is a storytelling game, this one is more about area control mixed with some pickup and deliver. The artwork in this game is stunning as always, but familiar as well if you have played any of his other games. Seeing the character tiles is like seeing old friends or at least cousins of the old friends. The game board is also modular, which adds replay value to the game, because you can put different tiles in different spots to form a completely different map. You can also flip the tiles over and make for a more challenging game as well. What I like best about this game is the many paths to victory. If you like attacking and being a pirate, you have that option. If you are not the bloodthirsty type, then diplomacy is your best option. Every option is viable and I encourage you to try them all and see which one you like best, or surprise people and go the path they didn't expect you to take.

There is currently a mini-expansion out called Metropolis Expansion. This adds 40 new buildings to the game, creating even more replay value. Lastly, there is a bonus scenario called Deep Fog, which you can download and print for free or purchase if you want it printed on something more official and pretty. In that scenario, the map shrinks significantly and when the end game is triggered, players have a chance to defeat the Deep Fog monster for a hefty sum of points. Again, this adds more replay value to the game. Another nice feature of the game is the character tiles, which are double-sided. One side is used for Islebound and the other for Above and Below, so if you are a Laukat-nut like me, you add more replay value to a different game as well.

I wasn't entirely sure what to think of this game, as I had only played Above and Below before, and this was nothing like it. I found myself having a completely different experience, but one that was equally fun. With his wide-range of talents, Ryan Laukat is a renaissance man in the board gaming industry. Playing Islebound has only confirmed my original belief in his brilliance, which I originally thought after playing Above and Below. I am now not only the proud owner of two of his games, but have since purchased some of his older games, and pledged on Kickstarter for Near and Far, the next game in his fictitious and fantastical world. If you like good game play with beautiful art, then I highly encourage you to pick up Islebound or any game in the Red Raven Games catalog. You won't regret it.