Padre Pio of Pietrelcina (now St. Pio, proclaimed a saint on June 16, 2002) is one of the most venerated contemporary saints of the Catholic Church. He was a friar of the Order of Friars Minor Capuchin, born in the little town of Pietrelcina in southern Italy. He later moved to the town of San Giovanni Rotondo, in Puglia, where he lived until his death on September 23, 1968.

St. Pio was a friar of many spir­itual gifts. Countless people were attracted to his confessional where he frequently spent 16 hours a day, and many received his saintly counsel and spiritual guidance through correspondence.

However, Padre Pio consid­ered the founding of the hospital, “Casa Sollievo della Sofferenza,” his greatest “work” on earth. Today his “Casa” is an interna­tional referral hospital with over 1,000 inpatient beds, renown both in Italy and abroad.

In the U.S., several thousand devotees belong to a network of over 100 Padre Pio prayer groups, part of an international network of groups formed by Padre Pio in his lifetime to pro­vide continuous prayers and sup­port for the mission and vision of the Casa hospital.

The Saint Pio Foundation was founded in April 2014 to expand and promote the work of the great saint. This new founda­tion is a national Catholic char­ity dedicated to evangelization through the promotion of the spiritual charism of St. Pio. 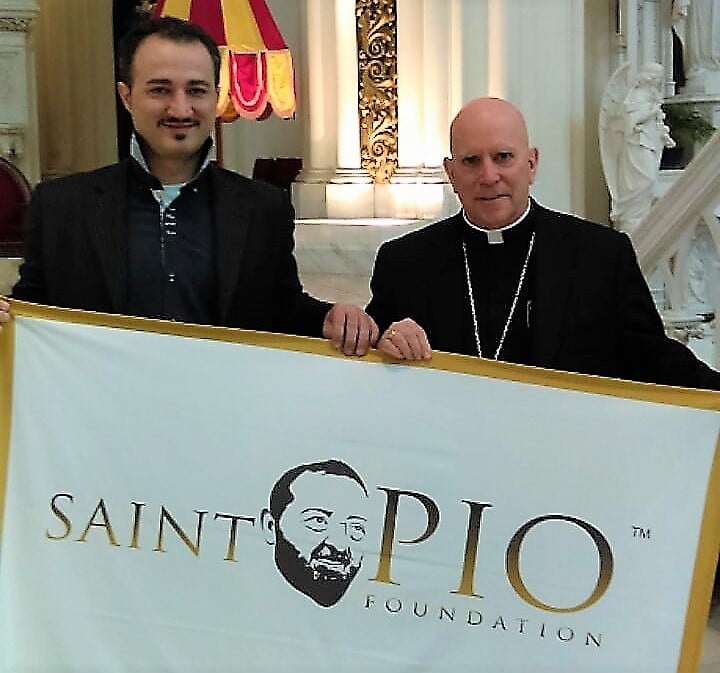 [tweet "Archbishop Aquila to serve on advisory council for @StPioFoundation"]

The founder invited Archbishop Samuel J. Aquila to serve on the Religious Advisory Council, which is made up by American and international Cardinals and Bishops of the Roman Catholic Church, who endorse and support the vision and goals of the Saint Pio Foundation.

Calling St. Pio “a saint of our time, a man dedicated to pen­ance, to the forgiveness of sins, to preaching fearlessly the truth about who Jesus Christ the Lord really is,” Maestro Lamonarca explained that the heart of the foundation is to “advance the charism of Padre Pio through cultural, religious and educational programs” and provid­ing medical assistance to the poor as Padre Pio did.

In announcing his invitation to the foundation, Maestro Lamonarca welcomed Archbishop Aquila as an “eloquent and inspiring” advocate for the foundation.

Funds raised by the Saint Pio Foundation are used to provide grants to American Catholic healthcare, educational, social, religious, and cultural partner organizations. As partners, they use their facilities and influence to advance the public’s knowledge of the legacy and importance of Saint Pio.