HABA is a company that is known for making great products for children including toys, games, blocks, and dolls. Today, I would like to tell you about two magnetic games that are aimed at children four and up, and retail for $20 each. They are called Magnetic Game Box 1, 2 Numbers and You and Magnetic Game Box ABC Expedition. 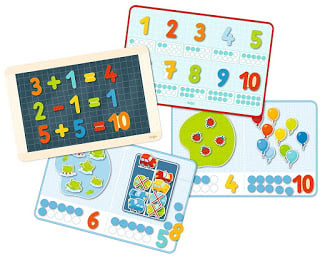 1, 2 Numbers and You comes in a heavy cardboard carrying case that opens up to make a display for your child to play with better. There are approximately 150 magnetic pieces comprised of numbers, operations symbols (addition, subtraction, equal signs, etc.), and objects to count (cars, apples, frogs, etc.). On the display is the image of a chalkboard that is magnetic in nature and looks like graph paper. The box also comes with two mats to put over the chalkboard. One has outlines of all the numbers and dots to count them. The other mat gives you two squares to put aforementioned objects with spaces to put the dots to count and to put the number as well. For example, you could put a pond with frogs in it and have your child count the frogs. 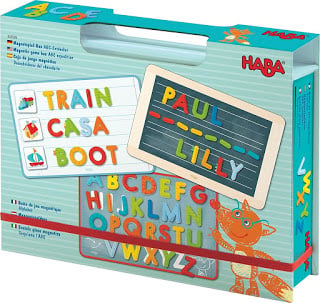 ABC Expedition comes in a heavy cardboard carrying case that opens up to make a display for your child to play with better. There are approximately 150 upper case magnetic letters. On the display is the image of a chalkboard that is magnetic in nature. The box also comes with two mats to put over the chalkboard. One has outlines of all the letters, so that your child can find the magnetic letters and match them to their outlines. The other mat resembles a piece of notebook paper or a worksheet. There you can place an image (mouse, ball, sun, etc.) and have your child practice spelling the word. 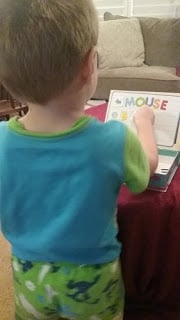 Overall, my son really enjoyed both of these sets, but judging by which one he plays with more, I would say he liked the number one better. He just had so much fun making pictures of cars in a parking lot or balloons and then counting them. I upped the difficulty at times, asking him to add something or take something away, and this set helped move that from an abstract concept to one that he could physically see and experience.

The components are a mixed bag for me. On the one hand, I liked the cardboard carrying case that doubled as a board to work on. It made the product great for at home or on the go in the car. The magnets themselves were a disappointment. I was expecting thicker magnets, something like Melissa and Doug makes. Instead they were of a thin quality, similar to a refrigerator magnet you would get on a phone book. It was also a bit tedious punching out all of those magnets. Now, I am an experienced board gamer who is used to punching a lot of items, but if you are not, set aside some time before you tell your child about this gift, because it will take some time to punch out everything. 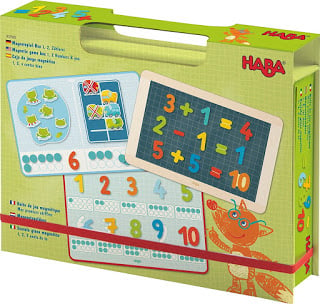 The magnet gripe aside, these magnetic game boxes are cute, fun, and educational. My son loves them, and I like that he gets to have fun while learning too. If you end up getting both, I recommend getting some Ziploc bags to separate and store the magnets in and then combining the two boxes into one.

Copyright 2017 Stuart Dunn
Your purchase of items mentioned here through Amazon links directly benefits the author of this article.