Striving for Faith and Courage with St. Maximilian Kolbe 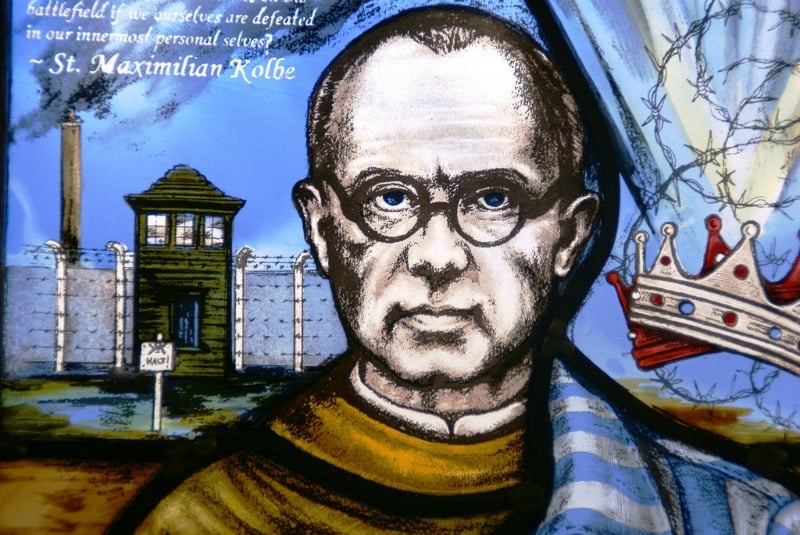 One of the traditions I have tried to instill in my children is reading stories of the saints. My kids have always loved these stories, filled with exciting and courageous tales, the mystique of the monastery, and occasionally a dragon. They each have their own favorites amongst the saints, and my 11-year-old son Henry has always been drawn to St. Maximilian Kolbe. In fact, today (August 14th) is his feast day, and thus he seemed an inspired choice for our reflection today!

St. Maximilian was born in Poland, in the late nineteenth century, into a devout Catholic family. In fact, as a widow later in her life, his mother became a Benedictine nun, and his brother Alphonse also became a priest. In his younger years, Maximilian was a bit precocious and gave his parents some gray hair. After he made his First Communion, however, he had to grow up in a hurry. He had a vision of Our Blessed Mother, during which time she held out two crowns, one white (for purity) and one red (for martyrdom). Our Lady asked Maximilian which he would accept, and he replied that he would accept both.

After he became a priest and joined the Franciscans as a young man, Maximilian started the Immaculata Movement, a group devoted to Our Lady and the spirit of evangelization. He was full of zeal for spreading the message of the love of Christ and Our Lady. Part of this ministry was a newspaper that he developed called The Knight of the Immaculate. This newspaper was very successful, with a daily run, and the monastery where he lived even acquired a printing press to aid in this important part of their work.

After spending some time as a missionary in Japan, Maximilian ended up back in Poland on account of some health problems. Following the Nazi invasion in 1939, he was arrested with other priests for publishing material speaking out against Nazi atrocities. He and his group of friars were briefly released, but two years later, the Nazis came again for Fr. Maximilian, and this time release was not an option. He was taken to a prison in Warsaw, and then on to Auschwitz.

In the camp, he ministered to others as discreetly as he could, staying awake at night to pray with other prisoners and hear confessions, to the detriment of his own health. Two months later, a man from their cell block escaped and could not be found. The punishment for this was the death of ten men from within this same group, via starvation. Ten were chosen, and one of them, a husband and father of young children, asked that his life be spared for their sake. Fr. Maximilian offered to take his place, and his request was granted.

At this point of the story, I knew that it would be difficult to read aloud to Henry, which is how we typically share our saint stories. I struggled as I read about how the men were shoved into this small cell and began to suffer. They were in this cell for weeks. Fr. Kolbe did his best to keep their spirits up by praying with them and singing. When I read about how desperate some of the men became as they began to die of thirst, I could not help myself; I started crying. Henry was watching me, very wide-eyed, because he is not used to seeing me like that. For many children, human suffering and death, while sad, is very abstract. Not so for adults. I could not help but think of my own son suffering like this, and how that would devastate my entire being. Henry was just so taken with the fact that St. Maximilian voluntarily went through this experience out of love for his fellow man. That level of heroism made a significant impact on him.

As we continued with the story, the men began to perish. Fr. Kolbe lingered until the end. When the cell was needed for other condemned prisoners, St. Maximilian was given a lethal injection to end his life. 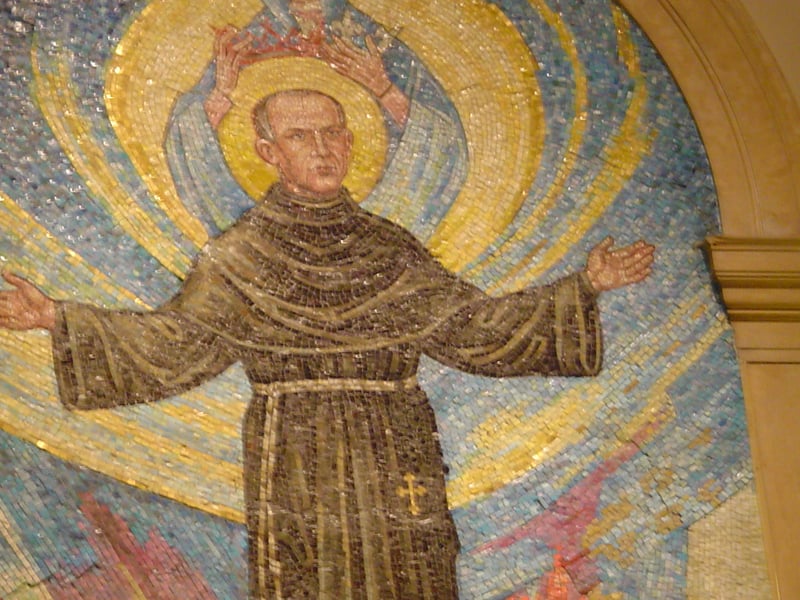 [tweet "St. Maximilian's story is an inspiring one of faith and courage -@TifWalsh"]

St. Maximilian's story is an inspiring one of faith and courage. I am so glad that Henry has taken a shine to him, and hopefully will ask for his intercession throughout his life. I cannot help but think of our Blessed Mother and how much she must have suffered to see her son in pain and in death. I want my son to be a saint, though I pray every day for the Lord to keep him safe from suffering and death. I think that this is a common mother’s prayer, and that Our Lord understands.

Do you or one you love have a devotion to St. Maximilian Kolbe? I would love to hear about it in the comments!

How St. Cecilia Brightens November With Her Example of Faith and Music
Read
Stillness and Quiet During Advent
Read
Returning Home in the Changing Seasons: My Faith Walk with St. Cecilia
Read