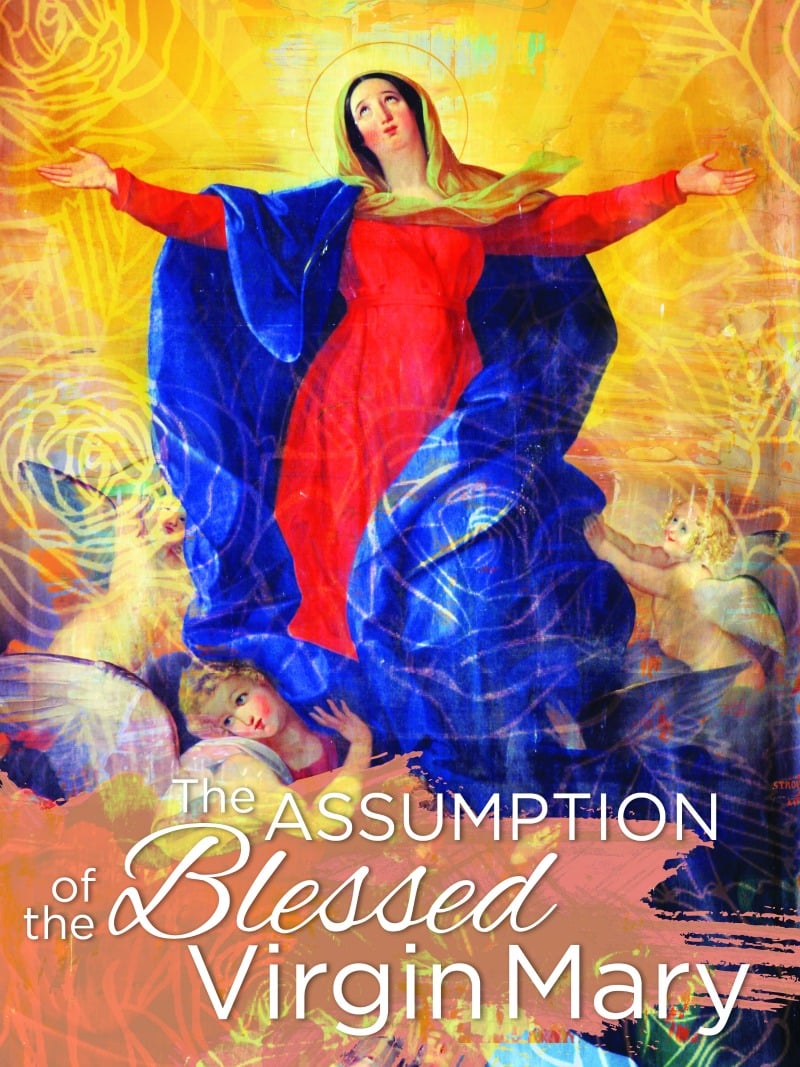 Readings for August 15: Solemnity of the Assumption of the Blessed Virgin Mary

I once asked a college theology class if anyone could explain the doctrine of the Assumption. A student replied, “yeah, that’s the teaching whereby the Catholic Church ‘assumes’ that Mary is in heaven.”

There’s a bit more to it than that. The Church does not just “assume” that any canonized saint in is in heaven. Rather, it authoritatively declares that a person is in glory and should therefore be honored in liturgy and imitated in life.  Our church calendar is filled with saints’ days.

But why a particular day for each saint? The first written evidence for this goes back to 155AD, to a bishop named Polycarp. The account of his martyrdom notes that after his execution, the faithful collected his bones, “more precious than gold,” and put them in a place of honor where each year they gathered to celebrate the anniversary of his death as a sort of “birthday” into eternal life.  Celebrating Mass in the catacombs over the relics of the martyrs led to the practice of putting relics in the main altar of every church. Eventually saints who did not die a martyr’s death were also commemorated on their heavenly “birthday” and their relics were accorded great honor.

From very early times, August 15 has been observed as the “birthday” of our Blessed Lady. On this greatest of all Marian feasts we celebrate the greatest moment of her life – being permanently re-united with her son and sharing his glory.

All the saints experience the “beatific vision” upon their entry into heaven, and we celebrate this on every saint’s day. But there is something unique about Mary’s day. The Catholic Church teaches authoritatively that it is not just Mary’s soul that was admitted to God’s glory, but that, at the end of her earthly life, Mary’s body as well as her soul was assumed into heaven by the loving power of God.

There is no eyewitness account of this actual event recorded in the Bible. Come to think of it, though, no one witnessed the actual resurrection of Jesus either!  The evidence was an empty tomb and eyewitness reports that the Risen Lord had appeared to them.

Interesting parallel here. There is a tomb at the foot of the Mt. of Olives where ancient tradition says that Mary’s body was laid. But there is nothing inside. There are no relics, as with other saints. And credible apparitions of Mary, though not recorded in the New Testament, have been recorded from the 3rd century till today.

Mary is not equal to Christ, of course. Jesus, though possessing a complete human nature, is the Eternal Word made flesh. Mary is only a creature.

But she is a unique creature, the highest of all creatures. This is not just because she was born without the handicap of original sin. Eve and Adam were born free of sin as well, but it did not stop them from sinning as soon as they had the chance. Mary instead chose, with the help of God’s grace, to preserve her God-given purity throughout the whole of her life.

The bodily corruption of death was not God’s original plan. It came into the world through sin, as St. Paul says “the sting of death is sin” (I Corinthians 15:56). So it is fitting that she who knew no sin should know no decay and no delay in enjoying the full fruits of her son’s work. It is fitting that she who stood by Christ under the cross should stand by him bodily at the right hand of the Father. “The Queen stands at your right hand, in gold of Ophir” (Psalm 45). Enoch and Elijah, who the Old Testament says were assumed into heaven, were surely great in God’s eyes. But they do not begin to compare with the immaculate mother of His Son.

We too, one day, insofar as we accept God’s grace, will stand at His right hand. But Paul says that “all will come to life again, but each one in proper order” (I Cor. 15:23). The Redeemer, of course, blazes the resurrection trail. But who is to be first among his disciples? The one who is last is first, the Lord’s humble handmaid who did no more than say yes, and keep saying yes, and whose soul magnified not herself, but the Lord.

[Tweet "Reflection on the Assumption by @dritaly: First among disciples, the Lord's humble handmaid"]