A Sense of Community

Throughout the last several weeks, I've been livestreaming our Sunday and daily Mass, as well as all of the Holy Week services, on our parish Facebook page. The first day I did this was a fiasco. My camera took video sideways, even though I was holding it horizontal, and the sound wasn't really good. I looked down all of the comments that were being made and was embarrassed at how many people were complaining about the picture. I know you have to watch it so you get a crick in your neck, but I am trying hard … and why aren't you just watching the sideways Mass instead of commenting?!

I admit I was appalled at all of the comments that were being posted during the Mass.

The next day, I had my act together better and the video was straight like it was supposed to be. I didn't expect any comments that day. But I was taken aback when comments began flying across the screen again, but this time with likes and hearts floating up the screen. I was glad my video was turning out better, but I was still really surprised people were commenting during the Mass. I admit I am starting to sound like the Mass police here but I couldn't help but think, "Hey you, stop typing and pay attention to the homily!"

But after several weeks as this kind of thing just kept going and more and more people were finding us on Facebook to tune in to Mass, I finally noticed that the comments were almost all alike. As soon as I went live just before the bells rang for Mass, people were jumping on and wishing each other good morning, and happy day, and thanking us for livestreaming Mass. It suddenly struck me as a beautiful thing they were doing. Members of our parish were congregating at Mass, just like they do on Sunday or during the week, checking in on each other, making sure older members were there for Mass, asking for prayers for each other or a loved one who was sick. Most of the time it was just a whole line of "Good morning!" scrolling down the screen.

It caught the attention of our pastor, who would always watch the Mass after it was posted on our Facebook page. He realized the need for people to comment was our sense of parish community right away, something that took me a few weeks to figure out. What a beautiful thing. Yes, they were typing at their computers while watching Mass, but if you think about it, don't you nod your head with something in the homily when you are in church? Or wave or nod at a neighbor at Mass or smile and tear up? People were instinctively doing this but since we couldn't see them, they used their keyboards instead!

Now I relish sitting down after I've posted the Mass online and read the comments, checking on everyone who was there and making sure older members are okay too. I've learned during this time of quarantine and social distancing that we desperately NEED each other to reach out to and hug. And are we not blessed we can do it with a stroke of a keyboard?

[tweet "I've learned during this time of quarantine and social distancing that we desperately NEED each other to reach out to and hug. And are we not blessed we can do it with a stroke of a keyboard?"] 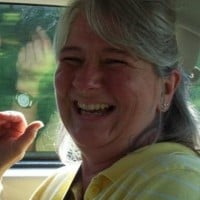 Lisa Hendrix Simmons is a wife, mother, grandmother, writer, and lover of adventures! She works full time at her Catholic parish as the social media/technology/Family Life Ministry coordinator. She writes about staying young and fun while living Catholic. When not writing she is knitting, playing music with her husband and having fun with her kids and grandkids. Visit her blog at https://youngfunandcatholic.blogspot.com/ and at www.simmonsfamilycenter.com/mommaknitsayarn