If you've spent any time on social media recently, you've probably gotten the sense that the world is very "us versus them" right now. You are either for us or against us, but you cannot be silent. You either choose to give us your absolute support, or you are part of the problem. There is no in-between. "Silence is violence," as they say. You cannot be Switzerland in our modern society. Switzerland is part of the problem, after all. You cannot sit by and allow injustice. In a way, our society is right: we cannot sit on the sidelines. We are all called to be warriors. We are at war. Our society just doesn't know who the enemy is.

Immortal Combat: Confronting the Heart of Darkness expands on that concept, the idea that there is a war going on down here on earth, and we are all involved. We are either fighting for God or fighting for Satan. There is no sitting on the sidelines of this war, and as Satan begins to show his true colors, we all must choose a side. We cannot be Switzerland in the war between good and evil. As Fr. Longenecker writes, "All it takes for evil to triumph is for enough good men to do nothing” (15). Those who will not fight will become casualties. We must all choose what, and who, we are fighting for. 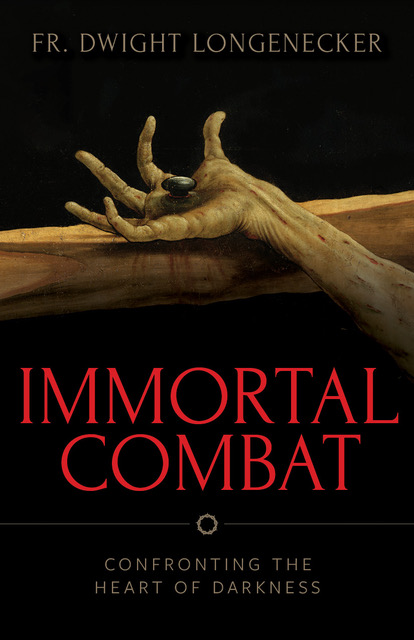 During the past few months, I've spent a lot of time wondering how people could be capable of such evil. Could there really be so many evil people in this world? I've always liked to believe that most people are good, but scrolling through my Facebook newsfeed, I'm not sure if I'm right anymore. There seem to be a whole lot more evil people in the world that I originally thought, and they are capable of greater evil than I ever thought imaginable. Sometimes I wonder if I'm being too pessimistic. Other times, I wonder if I was being too optimistic. Fr. Longenecker would probably be inclined to call me a realist. The truth is that we are all capable of great evil when we are devoid of grace, when we work against the will of God, when we choose to reject the salvific actions of Christ on the cross.

And that in a nutshell is the point of Fr. Longenecker's book: (1) fallen humanity is capable of great evil, and we are lying to ourselves if we think otherwise, (2) Christ is the secret Son of God capable of saving and redeeming mankind, and (3) by taking up our crosses and acknowledging our sinfulness, the grace of the sacraments and the cross can break the chains of evil that bind us.

Fr. Longenecker begins with the bad news, dedicating the first portion of the book to revealing the depths of depravity that can be found within the human person. He illustrates his points by using mythical creatures of evil, such as the Minotaur, Medusa, and Cerberus. When faced with such depravity, there's a temptation to believe that Fr. Longenecker is being overly pessimistic, if only because it's difficult to believe that we could be capable of such evil. But when we consider the big picture, I'm inclined to believe that he's right. We cannot consider ourselves apart from the grace of the sacraments, from the salvific actions of Christ who has redeemed us from our sin, but that is exactly what Fr. Longenecker is doing. He is considering the state of fallen humanity prior to the gift of grace. And considering the great evils we've been seeing in the world recently, it becomes easier to envision what this depraved humanity looks like.

After making us sufficiently depressed, Fr. Longenecker gives us the good news. Humanity might be fallen, but it has also been redeemed. Jesus Christ came as the long lost king, prepared to take his kingdom back from the enemy. He entered the enemy’s territory so that he could once again claim it in the name of the true king. Jesus Christ came to be the sacrificial lamb, the scapegoat for man’s sin. Jesus’ body was offered as the sacrifice to end all sacrifices, and the Lord of Death swallowed the Lord of Life, thereby destroying himself from the inside out. Christ was victorious over death and sin because he was first a sacrificial victim.

As Christians, we are invited to participate in that sacrifice. We can unite our crosses to the cross of Christ. The cross allows us to see that we were in chains, but Christ has given us the ability to break those chains. We can unite ourselves to Christ, and by doing so, we become heirs to the salvation secured when Jesus died on the cross and rose from the dead three days later. But first we must repent, acknowledge our sinfulness, and prepare our hearts to be purged of evil.

Immortal Combat is a book that must be read with the end in mind. You must leave room for the grace of the cross and the sacraments. If you stop reading halfway through because you've become too discouraged, you'll miss the point. You'll miss the good news. You'll miss the hope to be found in the midst of despair. Yes, people are capable of great evil. Yes, humanity has fallen into awful sin. But there is hope. We have been redeemed. There is grace. Christ died and rose again to save us, and all we must do is repent and believe in the Gospel, the Good News of Christ. This book is perfect for the times we live in, but reader, beware: begin with the end in mind. Hold onto hope and let the grace flow freely.

We are all capable of great evil when we are devoid of grace. #catholicmom