Celebrating the Assumption of Mary with your Family 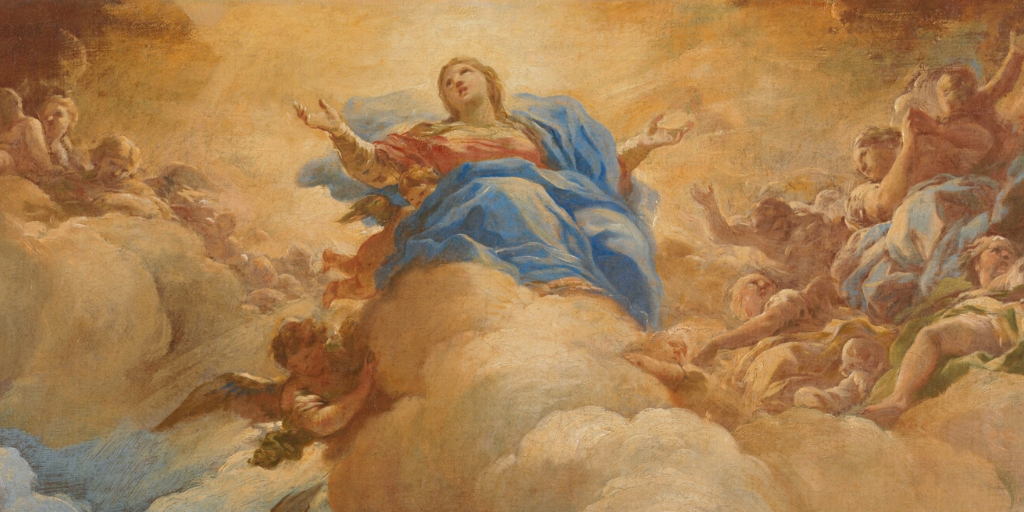 Allison Gingras shares 7 family celebration ideas for the upcoming Solemnity of the Assumption of Mary (August 15).

Some days in the Liturgical season, by their cultural and religious nature, lend themselves better to celebrating as a family than others—such as Christmas and Easter. Yet, every Solemnity, Memorial, or Feast in the Catholic Church is worthy of acknowledging in some special way. For families, additional feast days can offer beautiful teachable moments and the creation of lifetime memories. This month, the Church will celebrate the Solemnity of the Assumption of the Blessed Virgin Mary on August 15, commemorating the entry of Mary into heaven—body and soul. The Assumption falls into the category of “Solemnity,” which means it is among the highest rank feast days celebrating a mystery of faith.

The belief that Mary’s body (as well as her soul) was “assumed” into heaven was defined as a dogma (core belief of the faith) by Pope Pius XII on November 1, 1950, in the Apostolic Constitution Munificentissimus Deus, but belief in the Assumption of Mary dates to the earliest centuries of the Church. Pope Pius XII did not establish a new doctrine but merely confirmed the universal belief of early Christianity, declaring it to be revealed by God through the means of Apostolic tradition.

Saint John Damascene, in one of his sermons, shares the same general belief of all Christianity:

Your sacred and happy soul, as nature will have it, was separated in death from your most blessed and immaculate body; and although the body was duly interred, it did not remain in the state of death, neither was it dissolved by decay ... Your most pure and sinless body was not left on earth but you were transferred to your heavenly throne, O Lady, Queen, and Mother of God in truth.

One important distinction between what it means to ascend into heaven versus being assumed. Jesus Christ, ascended into heaven after His Resurrection, by His own power, however, Mary was "assumed" or taken up into heaven by God.

Ideas for Celebrating the Assumption of the Blessed Virgin Mary:

When a Solemnity falls on a Monday (or a Saturday), as is the case for Assumption in 2022, the obligation to attend Mass is abrogated (temporarily waived). However, that should not dissuade you and your family from attending Mass to mark this beautiful Marian feast day. Many families may still have children on school summer vacation, presenting an opportunity of attending daily Mass on August 15.

Although the Joyful Mysteries of the Rosary are typically prayed on Mondays, consider instead praying the Glorious Mysteries, which include the Assumption of Mary as well as the Coronation of Mary, which the Church celebrates every year on August 22. Take a moment to truly reflect on the gloriousness of this moment in Mary’s life, and the life of the Church. If you are praying with others, share your thoughts; consider repeating this step for the Coronation as well. 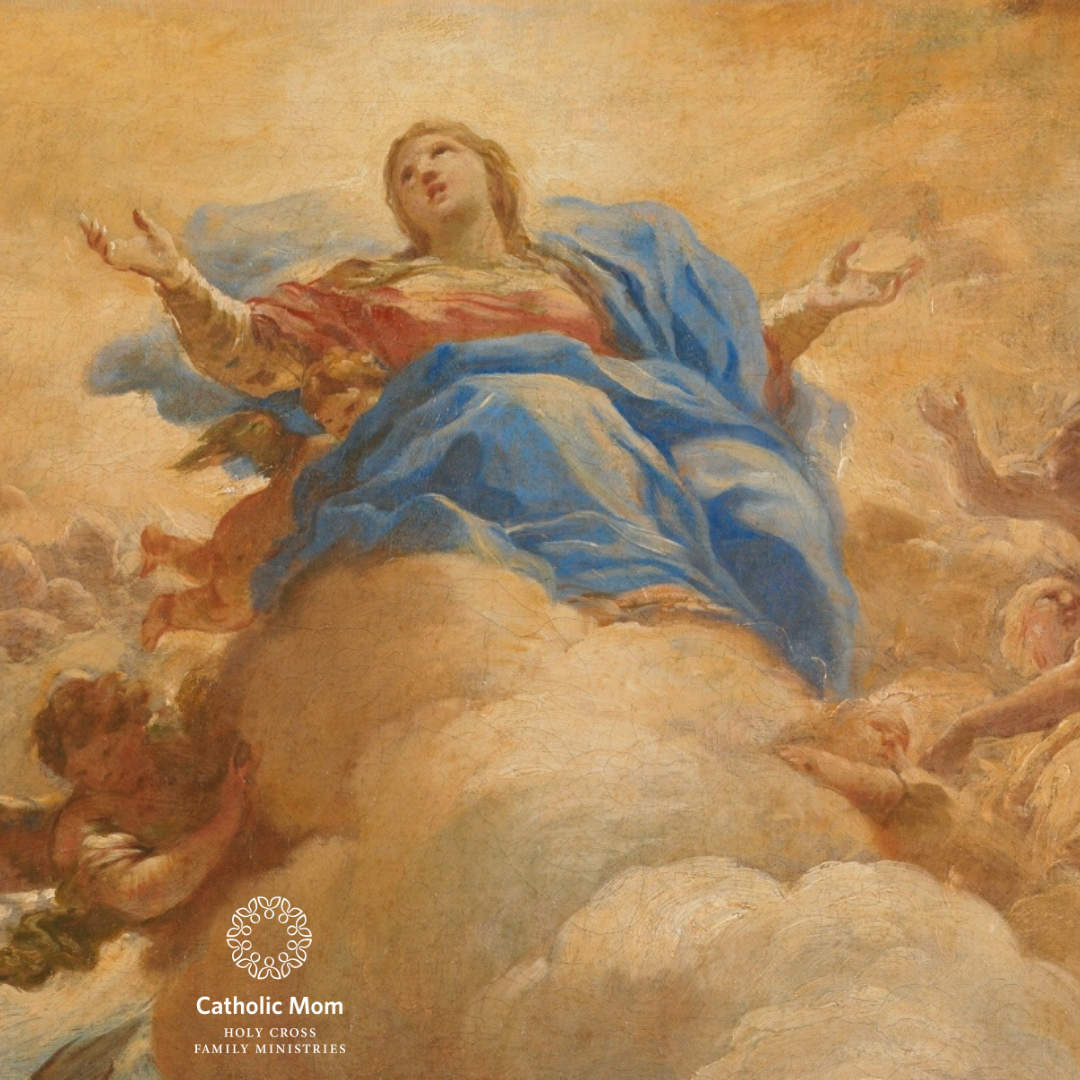 Food for the Feast

Did you know Assumption Day is a public holiday in countries such as Austria, Belgium, Chile, Croatia, France, parts of Germany, Guatemala, Greece, Italy, Poland, Portugal, Slovenia, Spain, and Switzerland? In some countries, Assumption celebrations are accompanied by festivals, colorful street processions, fireworks, and brilliant pageantry. Many countries also include in their Assumption celebrations the blessing of the summer harvest.

At the Italian Festa dell’Assunta people would eat a traditional fish lunch in restaurants. To celebrate the abundant harvest, typical dishes at Ferragosto include wheat or spelt, as well as fresh fruit and roasted meats. Desserts include cookies with aniseed icing.

In Poland the day is known as the Feast of Our Lady of Herbs, for the peasants take to church sweet-smelling bouquets of their finest blossoms mixed with the green of herbs. Children sing hymns at church, and later their parents enjoyed dancing to traditional Polish music. In France, religious processions take place in certain cities in France. For example, after Mass, pilgrims carry a statue of the Virgin Mary in the streets and around the neighborhood.

Consider some unique and fun ways to incorporate these traditions from across the globe into your family’s Assumption celebration.

Plant a Mary Garden, Visit One, or Plan Yours for Next Year

Plan a garden based on the many flowers associated with Mary, such as, roses, marigolds, lily, iris, periwinkle, and lady slipper. You don’t have to have your own garden to include flowers in your Assumption décor; visit a florist and make a “Mary Bouquet.” Your family may wish to present this bouquet to Mary after Mass or visit a Marian Shrine to bring your offering.

Create a wreath of flowers to crown a Mary statue, either in your home, garden, or parish. The sweet tradition of crowning Mary is typically done in May, but certainly, honoring Mary in this simple, yet beautiful, way should not be kept to just one month a year.

Assumption Triptych: A triptych is an artwork or relief carving consisting of three pieces or panels. Often used to impart narrative, create a sequence, or show different elements of the same subject matter. Lacy, at Catholic Icing, provides instructions (and examples) for creating an Assumption Triptych with the Immaculate Conception on the left, the Assumption of Mary in the middle, and Mary as Queen of heaven and earth on the right.

Faux Stained-Glass Window: Create a stained-glass window (or mosaic) to retell the story of Mary’s Assumption. To create this homemade window decoupage colorful tissue paper onto wax paper using watered down glue; your “window” can then be hung in an actual window for light to penetrate through as it does in the church. For a mosaic effect, build your image on colored construction paper—draw the outlines of your windows with a black marker; if you’d like a 3D effect, glue dark yarn along your drawn lines, then fill in the spaces with torn or cut-out shapes. Be creative, try using recycled materials from around your home. 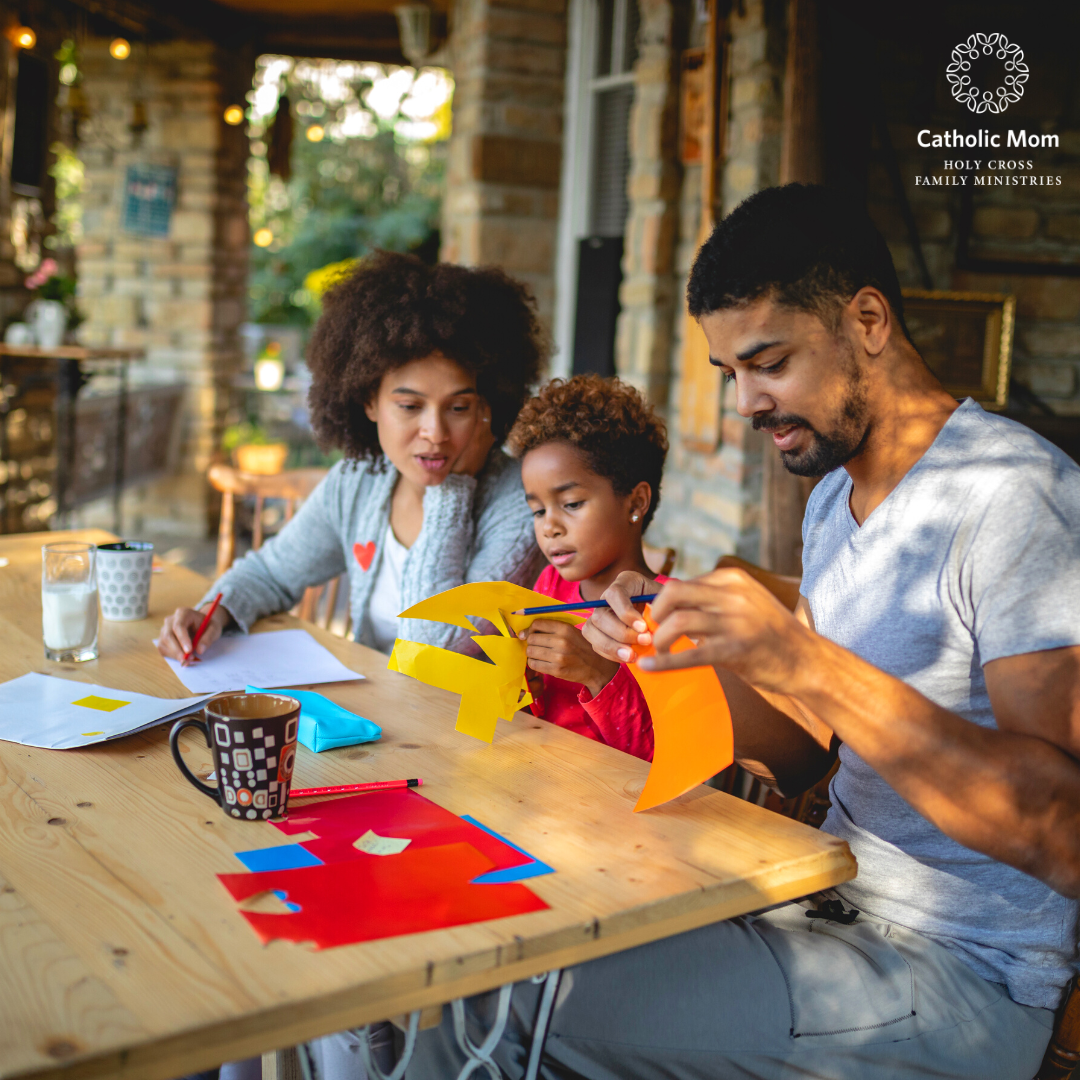 A “Dad joke” for this Marian Feast

Mary, Joseph, and Jesus are sitting around the kitchen table when Mary announces, “When I die, I am going into heaven—body and soul.” Joseph looks kindly yet hesitantly at his wife and responds, “Well, that’s quite an assumption, Mary.”

In addition to the many ideas offered above, the Elizabeth Clare blog includes several more—including step-by-step instructions on conducting an Assumption of Mary Scavenger Hunt! You will also find a wonderful book list for sharing the gift of this day through story. 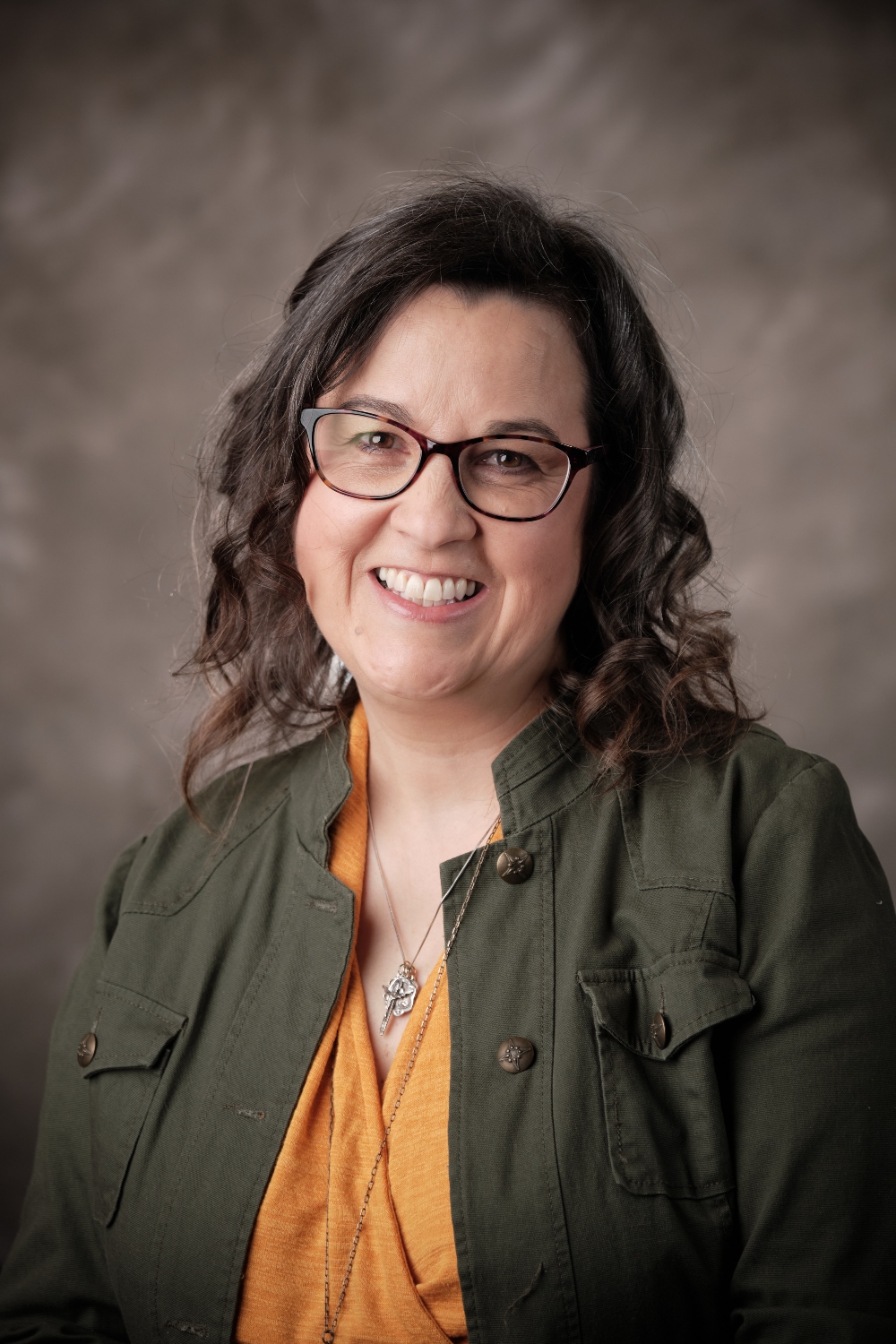 Allison Gingras works for Family Rosary, Catholic Mom and the Diocese of Fall River as a social media and digital specialist. She is the author of Encountering Signs of Faith (Fall 2022, Ave Maria Press). Allison developed the Stay Connected Journals for Catholic Women series including her volumes—The Gift of Invitation and Seeking Peace (OSV). Podcast host of A Seeking Heart with Allison Gingras and a co-host of Catholic Momcast.

Lent 2022: At the Foot of the Cross
Read
Each Ancestor Matters
Read
Jesus Is Our Eucharistic Savior
Read