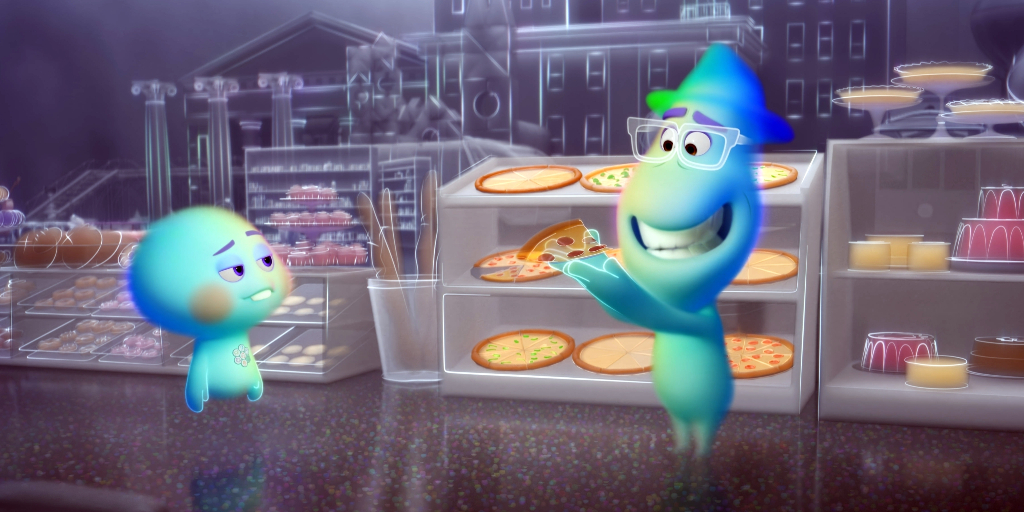 Should Catholic parents share 'Soul' with their children? An interview with Fr. Vince Kuna, C.S.C., of Family Theater Productions.

On Christmas Day, Soul, the latest animated film from Disney's Pixar division, came out on the streaming service Disney+. It'd be a stretch to call it a faith-based film, but it definitely deals with big metaphysical themes.

Directed by Pete Docter (Pixar's Up and Inside Out), Soul features Jamie Foxx as the voice of Joe Gardner, a middle-aged middle-school band teacher in New York City who unexpectedly gets a big break in his lifelong quest to be a successful jazz musician.

But before he can take the stage, Joe suffers a mishap. His soul -- a blue, blobby version of Joe, complete with glasses and hat -- winds up on a bridge leading to the pulsing light that he's told is the Great Beyond.

But Joe isn't ready to go into the light, so he manages to escape and winds up in the Great Before. It's a nursery school of sorts for preborn souls (also blue blobby creatures).

There, strange minders who look like moving Picasso drawings and are all named Jerry imprint souls with their personalities and eventually -- provided they've found their "spark" -- propel them down to Earth.

In the Great Before, Joe also meets Number 22, a cranky soul (voice by Tina Fey), who's been avoiding going to Earth for centuries, despite the help of many human mentors (including Mother Teresa).

Soul doesn't say whether the souls arrive in their bodies prior to birth, afterward or simultaneously, neatly sidestepping questions about when human life begins.

While the film has beautiful animation and many charming elements (especially if you love jazz), its cosmology conflicts with Catholic teaching on souls and the afterlife. Also, at one point, a human soul is embodied in an animal.

So, we turned to Family Theater's producer-at-large Father Vince Kuna, C.S.C., for his perspective on how Catholics might view Soul.

How does Soul's Great Beyond conform to Catholic teaching on the afterlife?

In a sense, no artistic take on the afterlife really conforms to Catholic teaching on Heaven, Purgatory or Hell. The only one thing we can know for sure about Heaven is that it is different. So, paradoxically, the only thing we know about Heaven is what we don’t know.

Consider the passage from the Gospels where Jesus is asked a ridiculous question about a woman lawfully being married and widowed by a succession of seven brothers. Which pair will be the match for Heaven? (Subtext to the question: What is Heaven like?)

Jesus answers “none of them.” Existence in Heaven is different than anything of what we experience on Earth.

What about the Great Before?

In the Great Before, the filmmakers' particular take on when life begins would be the greatest contradiction to Church teaching. The film proposes life begins before conception, and that souls are somehow waiting to inhabit a body.

We don’t need to refer to theology to answer the question. At conception, an unborn baby has the same genetic composition as they do when born, and the same composition they will carry with them through the rest of their life. The soul then would be indicative of God’s continual work, created at the moment life is created: conception.

How about the film's larger themes?

We’ve already considered the afterlife, so I don’t think it gets any “larger” than that.

The idea of human souls moving into different bodies, especially animals, can be problematic -- what is your view of how the film uses this?

Yes, it’s problematic. But, kind of like Wonder Woman 1984, there was a point in the film when I just got lost in plot details, put the film on in the background and started multi-tasking. That’s the beauty of streaming services. I couldn’t do that in a theater. So, lack of quality coming out of Hollywood contributes to my productivity in other areas.

Should Catholic parents share Soul with their children? If not, why not? If so, what conversations should they have?

I am usually one to leave parenting up to the parents. On one hand, you risk cultivating a forbidden fruit by restricting them seeing it. On the other hand, they would be exposed to some botched theology (and biology).

My preference would tend to be the latter, if your child is precocious enough to understand and critique what the film proposes, they’re better equipped to articulate Catholic belief as an adult.

Soul's main character is a jazz musician/teacher having a midlife crisis -- how does this relate to younger viewers, since this is marketed as a family movie?

I wouldn’t say the main character is having a midlife crisis, per se. I think this is where the film is the most honest. The filmmakers follow creative professional vocations of their own and would know how difficult it is to “make it.” -- and continue to “make it.”

If your child has any inkling of interest in the entertainment world, this could be a frank introduction to working in that world. One is continuously scrambling for gigs, even into middle age.

What is your overall impression of Soul, both as a Pixar film and a family film in general?

There’s a story to be told in the main character succeeding in his God-given vocation as a jazz musician. The story could have been told without any reference to the afterlife, which leads me to think the writing wasn’t strong enough to make the main story compelling, and the afterlife asides exist to compensate for that deficiency.

There should be something compelling about jazz as well. I like jazz. Outside of classical symphonies, it’s just about the only live music I can take in at middle age. I like that the film attempted to introduce a new generation to jazz. The afterlife plot, then was just the vehicle to draw an audience into this improvised form of music. That creative choice, though, detracted from jazz’s ability to stand on its own.

A year ago, at one of our parish’s last in-person fundraisers before shutdown, I was the only bidder on a Miles Davis boxed set during the silent auction. This is a parish of diverse artistic and musical interests, with many of our parishioners working professionally in the Industry. So, it will be an uphill climb for musicians and filmmakers to revolve future stories around jazz.

Soul is available exclusively for streaming on Disney+.