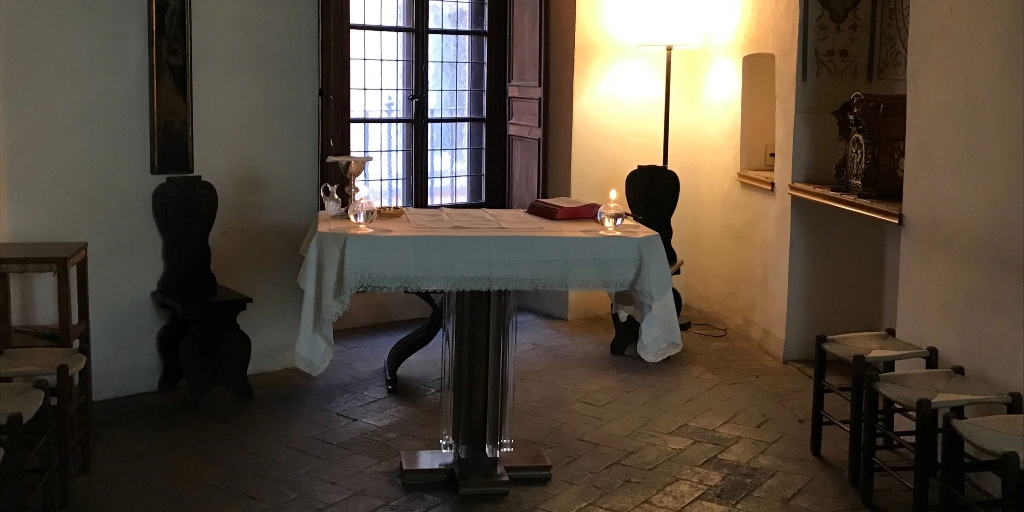 Janelle Peregoy recounts a trip to Rome, guided by the spirit of St. Ignatius in a pilgrimage of the soul.

When our oldest son was 9 months old, we traveled to Rome and he tasted pizza and spaghetti for the first time. We stayed in a postage-stamp sized room in a boutique hotel around the corner from the Spanish Steps. The owners of the hotel, a pair of brothers from Naples, were known to frequently curse the local pizza. “Electric pizza!” Dismissive hand gesture. The implication being that the wood-fired pizza found more commonly in Naples is vastly superior.

Beyond my son’s culinary foray into pizza, the trip provided all of us all with many firsts. Our weeks in Rome allowed us to fulfill a bucket-list desire to attend Christmas Eve Mass at St. Peter’s Basilica with Pope Francis. Unbeknownst to us, it was the spirit of St. Ignatius of Loyola who would ultimately guide us through the streets of Rome that December.

After we booked our flights, I emailed a Jesuit friend who had recently moved to see if he would want to get together at some point. By the time we met up with him, it was obvious that the strain of learning a new language and a new culture had made him eager to have the company of friends from the States. Our friend was generous with his time, escorting us to the Pantheon, Piazza Navona, Trevi Fountain and other popular tourist locations. He took us to church with him and introduced us to his friend group, a small community of English-speaking expats, many of whom are journalists covering Vatican affairs for publications back in North America.

My husband and I were amazed at how easily we slipped into an easy routine; our mornings focused around some museum tour or historical site. Our afternoons were long-meandering walks through the Roman streets. We lost ourselves among the locals as they bustled through their lives and last-minute Christmas shopping. Our son, ever the trooper, contentedly observed his surroundings from the vantage point of the baby carrier. We quickly learned how much the Italians adore bambinos as my son enjoyed the attention of a seemingly endless entourage of admirers.

On one such afternoon stroll, our friend joined along with us. As we walked past an innocuous building, he pointed it out to us.

“Those are the rooms where St. Ignatius spent the last years of his life.”

“Really?! Are they open to the public?”

He winked at me. “I just happen to know where the key is kept.”

Click to tweet:
If done with intention, my household chores demonstrate my love for my family and by extension a small glimpse of God’s love for each of us. #catholicmom

St. Ignatius was born into minor nobility and spent his early life as a courtier and a soldier, known for his vanity and arrogance. During battle, his leg was broken by a cannonball, which led to a prolonged convalescence in his family’s castle. From there, he began reading about the lives of the saints and found himself being called to a deeper relationship with God. This year actually marks the Ignatian Year, the 500th anniversary of Ignatius’ injury and subsequent conversion.

After his recovery, St. Ignatius held vigil at the shrine to Our Lady of Montserrat and renounced his former life and left as a pilgrim. From there, he would create the Spiritual Exercises, a series of contemplative reflections designed to stretch and condition one’s spirituality. Desiring to become a priest, Ignatius would return to school to complete his education. His companions at the University of Paris, Francis Xavier and Peter Faber, would later join Ignatius in founding the Society of Jesus (Jesuits) and would also be canonized as saints. More than a decade after the companions first met, Pope Paul III and the Catholic Church would recognize the Society of Jesus as a new religious order. Its members unanimously chose Ignatius as the order’s first Father General and from that point, Ignatius settled into his life in Rome. 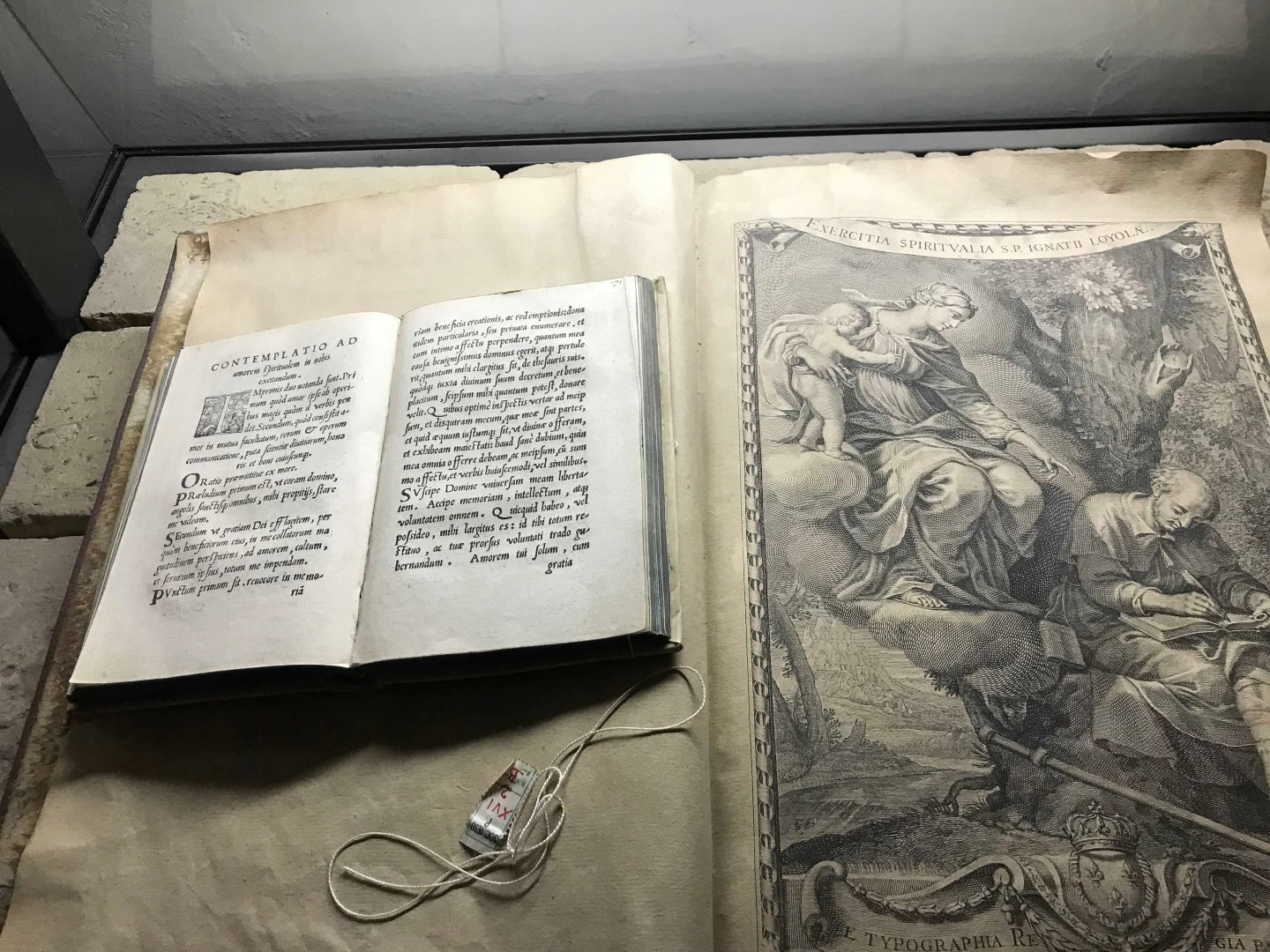 Upon entering the private rooms of St. Ignatius, one of the most notable features is the relatively large desk, from where he was said to have written thousands of letters – offering encouragement and advice to his brother Jesuits. By the end of his life, Jesuits had traveled as far west as Brazil and as far east as Japan. Did he enjoy writing all those letters? How did he feel about essentially becoming an administrator during the last 15 years of his life? I found myself fixating on the desk and paused to circle it several times. Did Ignatius ever resent his fellow Jesuits for the awesome adventure of their evangelization? Ignatius had spent so much of his younger life seeking the next thrill or the next battle. Did he make peace with his past somewhere between all those letters?

In my current life as a busy mom of two, I often reflect on the drudgery of parenting: the seemingly endless cooking, cleaning and laundry. In my better moments, I recognize that all that all these chores represent an endless opportunity for service. If done with intention, they demonstrate my love for my family and by extension a small glimpse of God’s love for each of us. 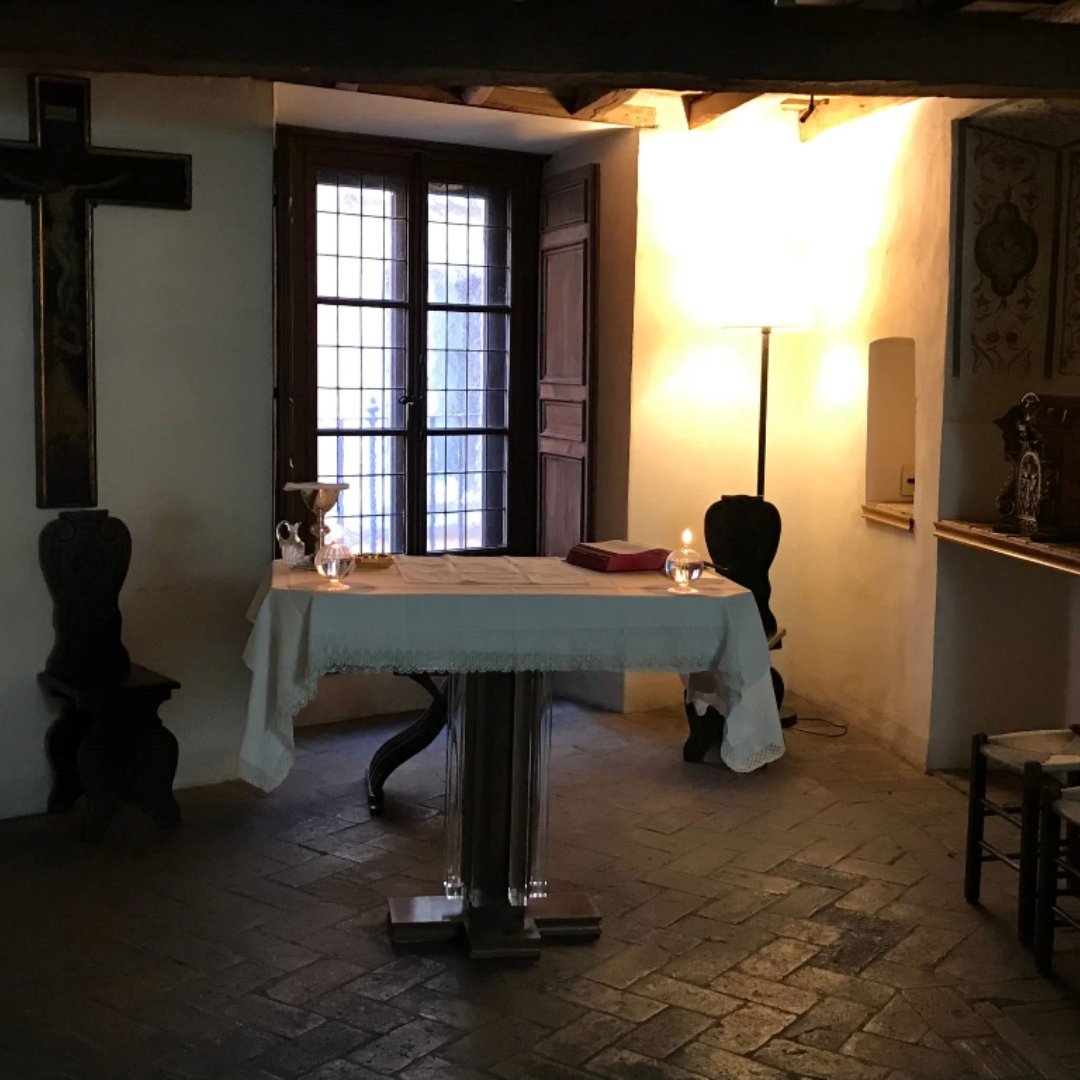 St. Ignatius formed deep, abiding relationships from his solitary desk. He reasoned that the secular world needed evangelization, so he asked his fellow Jesuits to become teachers as well as missionaries. He wanted to learn of the new cultures and customs that his brothers encountered. Ignatius’ insight was that any and all places are possible for nurturing a relationship with Christ.

Recently my son, now 4 years old, pulled out our travel book from the time in Rome. He found the pages dedicated to St. Ignatius’s rooms and pointed a painting of him.

Yes, we did … amid family and friendship, amid slices of pizza and cups of espresso, amid desks and rooms we were never supposed to see. St. Ignatius seemed palpably present in Rome, imploring us find God in all things. 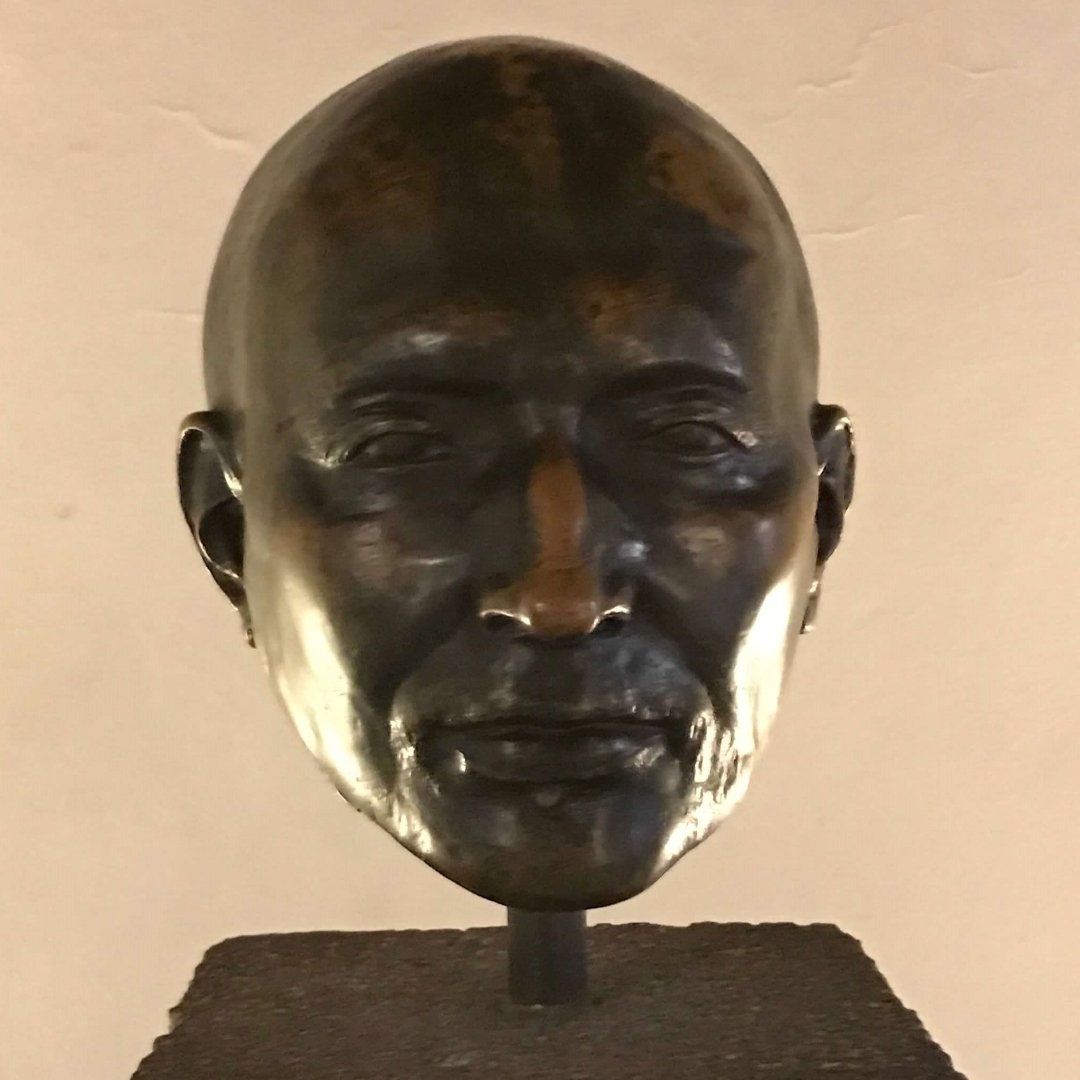