'Shadow in the Dark': An Adventure for Middle-School Readers

You'll rarely hear me say that a book would make a terrific movie, but I'd say that about Shadow in the Dark, Antony Barone Kolenc's novel for young readers. Tweens and teens who enjoy a medieval setting, plenty of action, and a good scare won't be able to put this book down.

Synopsis: In twelfth century England, an attack by bandits in the middle of the night leaves a young boy with no memory of who he is or where he is from. Nursed back to health by the devoted monks in a Benedictine abbey, he takes the name Alexander, or Xan for short. Aided by the kindly Brother Andrew, and his best friend, Lucy, Xan commits himself to finding out who he really is. Is his family still alive? Why has God allowed so much suffering into his life? And who — or what — is the shadowy figure creeping around the abbey in the dead of night?

The virtue of integrity is central to the story, as Xan and his friends discover which of the people around them are who they say they are— and who can be trusted. This mystery story provides a fascinating glimpse inside the feudal world and the monastic life during the Middle Ages. 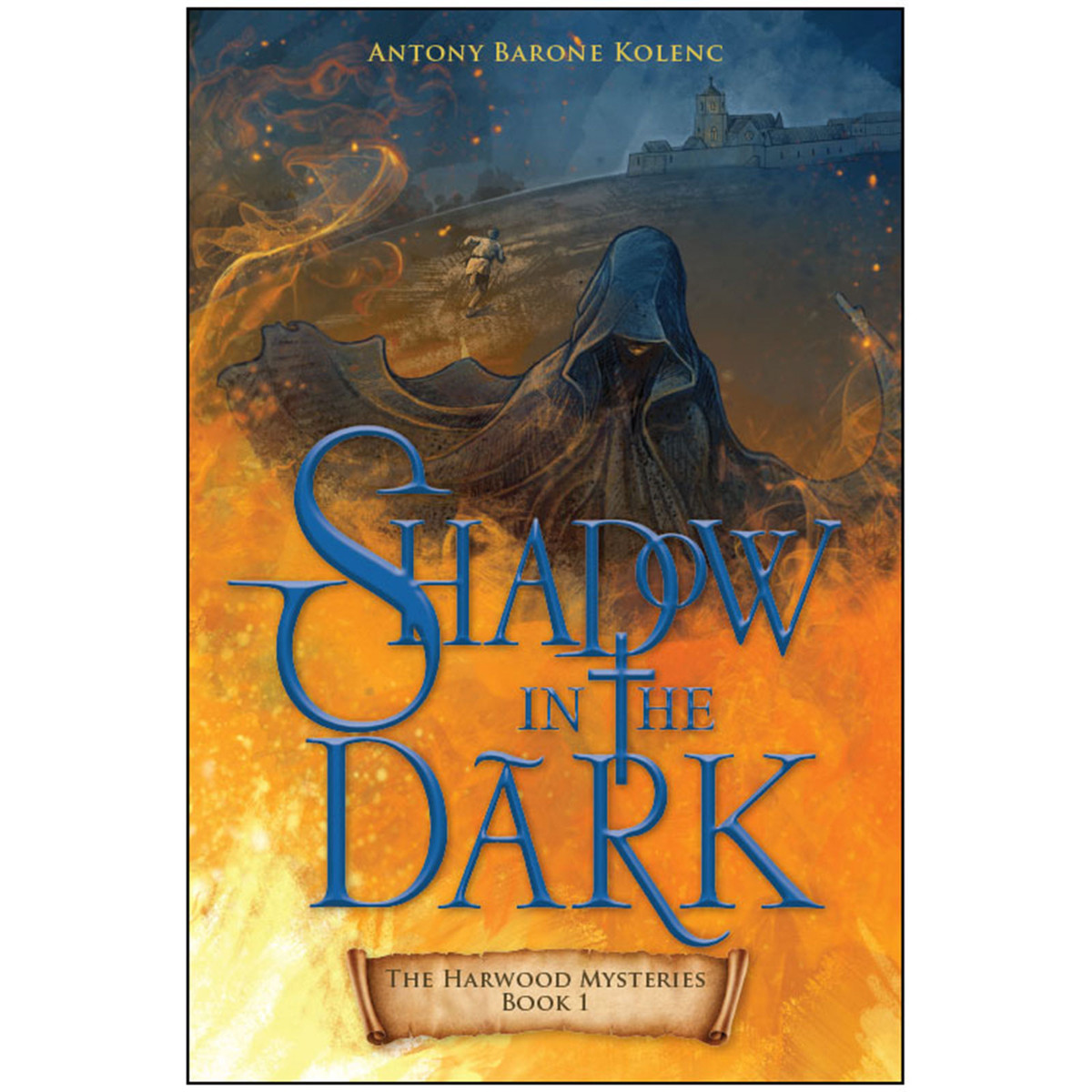 Shadow in the Dark is the first book in The Harwood Mysteries series by Antony Barone Kolenc and is published by Loyola Press. The author has completely revised and updated this novel from an earlier release. Join a live chat with the author on Facebook, Monday, July 13 at 6:30 PM Eastern: Tony will answer reader questions, read an excerpt from the book, and give away a copy of the novel.

Enjoy an excerpt from Shadow in the Dark:

Xan cracked open the door. Brother Oscar was nowhere in sight, but snores spilled out from his nearby cell. He slid past the monk’s door and down the steps.

Outside, the mist was getting thicker. His breath rose like wispy fog in the faint moonlight. Even with his shoes on, his feet in the wet grass felt as if they’d been frozen in a block of ice.
This couldn’t possibly turn out well. If the Shadow were one of the monks, he might get in trouble, perhaps even a paddling. If the Shadow were an intruder, he might get attacked. And if it were the angel of death — still a possibility — he might lose his life. After all, two times the Shadow had been seen, and both times someone had died.
All right, God, this may have been a bad idea. Can You help me out of this?
His heart was beating almost loud enough for him to hear it. Yet, in the library beneath that painting, Brother Andrew had told him not to fear death.
“Get your senses about you,” he said aloud, forcing himself to move through the mist.
He took cover at the corner of the hedge — the last place he’d seen the Shadow. Even though the wind was cutting like icicles, sweat clung to the inside of his tunic.
Just then, a branch cracked. A figure moved from the other end of the hedge, but it was not creeping near the trail to Lord Godfrey’s estate. It was heading up the hill toward the abbey!
This was the closest he’d ever been to the shadowy figure but, in all this mist, he could barely make out more detail than from the window.
It was dressed in a robe of dark, woolen material, the same as the monks wore. Its cowl hung so low over its head that it was impossible to tell from this distance if there was even a face beneath the hood.
The angel of death in his nightmare had reached with bony, skeletal hands. This figure didn’t seem to have any hands at all, unless they were tucked inside its robe.
Yet an object was at its side, so it must have had a hand of some sort to grasp with. Its body was blocking the object, but it appeared to be long and narrow, round and thin — a staff or reed of some kind, like the one he had seen on Brother Leo’s bed that day he’d first met the monk.
Xan’s paralyzed legs wouldn’t move to follow it. John was right: he must be a dotie fool to do this. What if this were that bandit, Rummy? The young boys might find his dead body crumpled in a heap on the meadow in the morning. Then they’d have nightmares for all their days.
Except if he went back without discovering the truth, they’d have nightmares anyway.
The hooded figure reached the top of the grassy hill — limping slightly, as though in pain — and headed into the granges.
There was no use debating anymore. Xan couldn’t go back to the dorm now without completing his mission. A crowd of young boys probably were pressed around the window slits, watching his every move. They were counting on him. 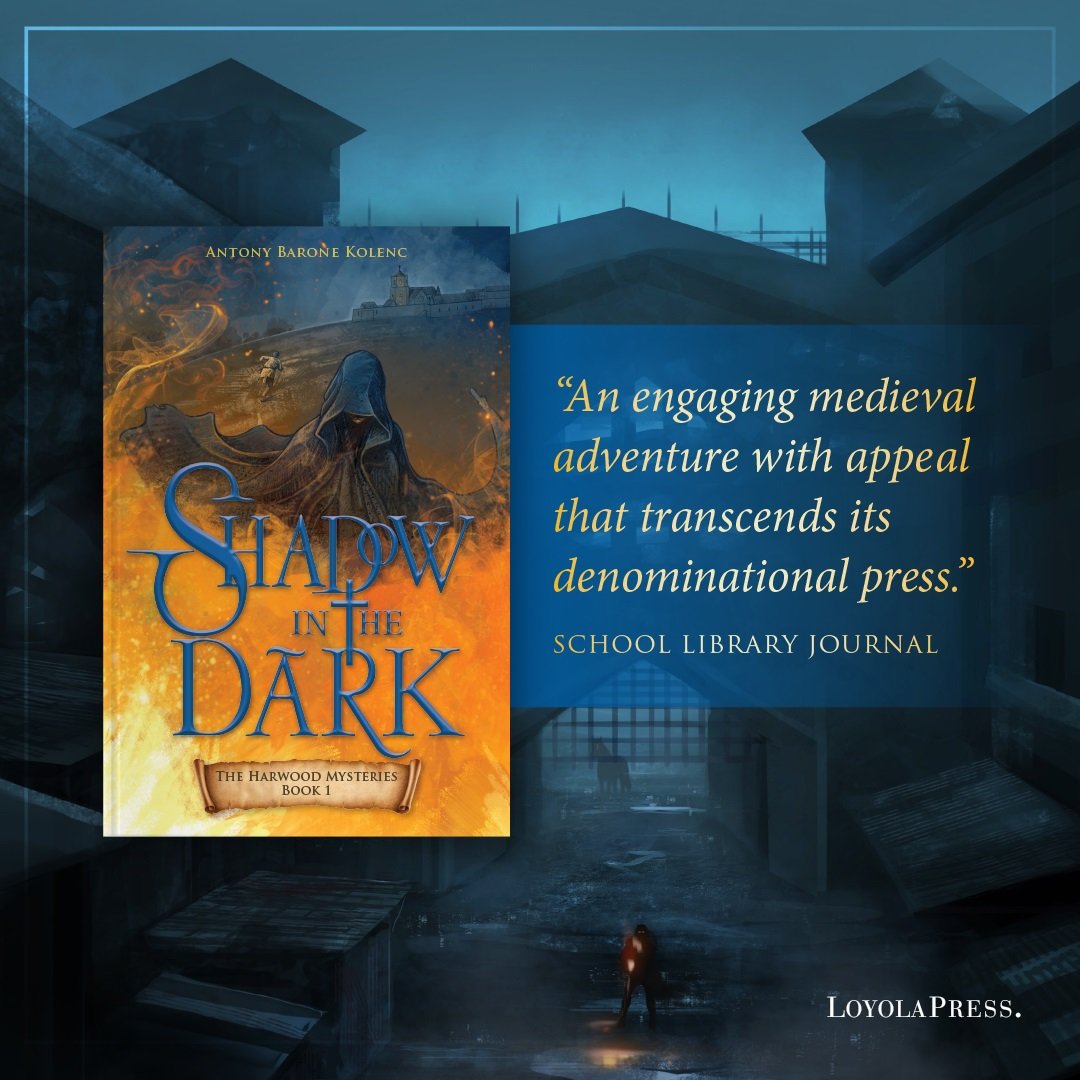 About the author: Antony Barone Kolenc (“Tony”) retired as a Lieutenant Colonel from the U.S. Air Force Judge Advocate General’s Corps after 21 years of military service. He is a law professor who teaches courses on constitutional and military law and has been published in numerous journals and magazines, and he speaks at legal, writing, and homeschooling events. Tony and his family live in Jacksonville, and are the proud parents of five children and three grandchildren. His book, Shadow in the Dark, Book One in The Harwood Mysteries, is available in paperback, as an ebook, and on audible from Loyola Press.