Skateboarding and Angels Lead a Schoolgirl to Faith

Violet, Book Two in the "I am Girl" series by Renée Lichtenhan, is a Catholic girl’s book as it should be. An unhappy rich girl at a prestigious Catholic middle school in New York City not only finds God by way of a skateboarding park in Harlem, but she also leads her fallen-away parents back into the Church. Our Lord is an expert at making the impossible happen, and He likes to recruit the help of the small and powerless. In this case, he chooses Violet’s autistic brother and a saintly Iraqi cleaning woman to bring about a chain of miracles. This is an exciting and encouraging story, a story good for the soul. 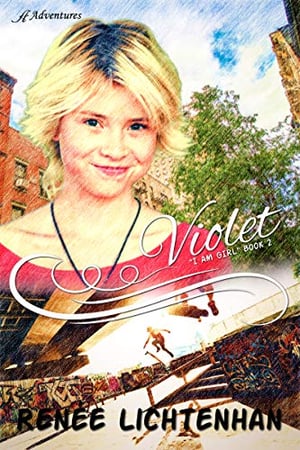 Violet is a gripping book with a classic story line, reminding me very much of German author Erich Kästner’s children’s novel Dot and Anton, one of my favorite children’s books ever. Violet is the tale of an unhappy rich girl with a good heart whose wealthy society parents leave her upbringing to the care of a nanny and to an expensive private school. Seeking excitement, Violet leads a secret double life at a Harlem skateboard park where she befriends Trey, a boy who lives in poverty and whose single mom has to work until late at night. All this is the plot of Dot and Anton transferred from 1920s Berlin to contemporary New York City. Even the ensuing involvement with the dangerous criminal element in Harlem matches Kästner’s story.

The author sets the classic plot in today’s world. The book is brimming with relevant issues young girls struggle with, both timeless and current. These issues arise naturally in the plot. Although common in today’s middle grade and teen novels, Violet’s problems are treated from a very uncommon Catholic perspective. It involves angels -- in a subtle way!

Violet’s father is a successful politician who campaigns with his wife by his side. Most of the time, the girl’s parents are not around. Their son and daughter are raised by a nanny. Many young readers will be able to empathize because their parents do not share much of their everyday lives.

Her secret afternoons in a Harlem skateboarding park open Violet’s eyes to problems much bigger than her own. She meets kids who are geographically neighbors, but who live in a world socially separated from hers, a world of poverty and ghetto violence. She is able to forge a connection through her great skill in skateboarding, which they admire. Violet’s horizon is widened even more through her encounter with Iraqi immigrant Joza who tells her about the terror she experienced in her home country. Finally, Violet’s eyes are opened to the family problems of her Latina nanny Maria, whose continuous loving presence she had always taken for granted.

The central theme in this story, however, develops around Oliver, Violet’s gifted autistic brother. Oliver cannot communicate with strangers and is terrified of human touch. Yet he becomes the driving force behind Violet’s conversion and behind the chain reaction of grace spreading from his family to many others whose lives they touch.

Violet’s story will encourage girls to rise above adversity and open their eyes and hearts to the needs of others. Readers will become aware of the mystical Church without any overt discussion of the subject. Along with Violet, they will discover that angels are real in a beautiful old church in Harlem!

Apart from the series’ title, "I Am Girl," and the cover, Violet should be just as appealing to boys. After all, skateboarding is a guys’ thing.

CLICK TO TWEET
Our Lord is an expert at making the impossible happen, and He likes to recruit the help of the small and powerless. #catholicmom

You may also like Carabelle, Book 1 in the "I am Girl" series, by Renee Lichtenhan.

Visit Books For Catholic Kids for more reviews, for lists of books for Catholic kids and teens, and for resources to build your library.

Discussion: What do you think is the greatest challenge to wealthy family? What does Scripture tell us?