Teaching our Children to Love, not Fear

Janelle Peregoy considers the lessons our children learn from what we prioritize as parents.

My 3-year-old, Nicholas, pointed to the incandescent shimmers off the sand in the midday sunshine. He stood undeterred as the waves lapped at the shoreline, occasionally swallowing his toes. We held hands and frolicked along the wet sand, gleefully kicking kelp caught around our ankles. I remember holding my breath, willing myself to cement this moment into the depths of memory.

Just a half-hour before Nicholas noticed the sparkling sand, he and my husband returned from the shore to our beach tent.

“How was the water?”

My husband gave a slight sigh, “When we got to the water’s edge, he said it was scary and that he wanted to go back.”

Under the pretense of finding seashells, I ushered Nicky back to the waves.

“Shall we wade into the water?”

I eventually cajoled him into allowing me to hold him in my arms while I walked into the water. Soon I was swinging him low enough to allow his toes to graze the waves. With every passing minute, his confidence seemed to strengthen. Soon he was standing on his own as the tides rose to the shoreline. He would watch them from a distance and yell with enthusiasm, “It’s coming!”

My brave guy left that the beach that totally secure in his ability to touch the ocean. I was beaming with pride. 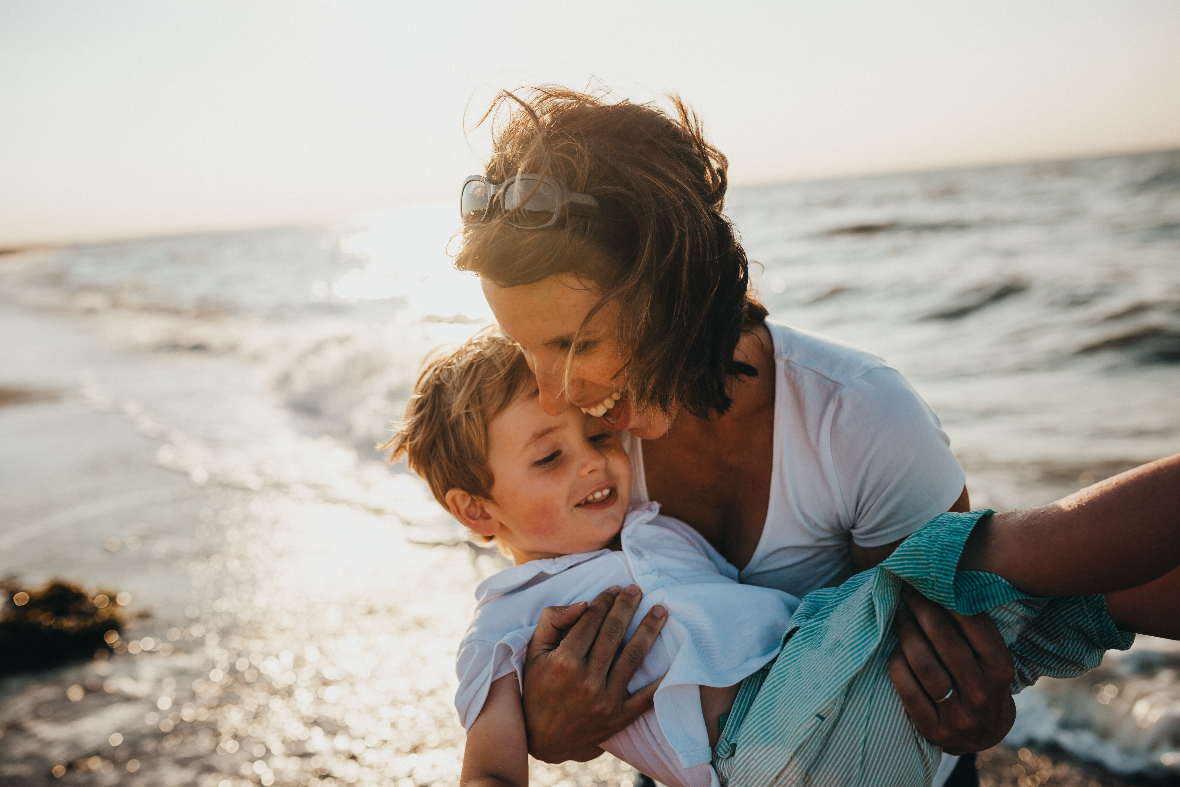 When we had first start looking at child care centers for Nicholas two years ago, we had toured one that focused on security (fingerprint-enabled access) and cleanliness (surfaces bleached twice a day). Admittedly, we all appreciate extra sanitization these days, but when I walked around that center the word running through my mind was sterile. The only place where I could easily hear the giggles and squeals of children was outdoors on their playground. I had to ask the tour guide, repeatedly and in different ways, if the center had a philosophy of education beyond security and hygiene.

There are two points I want to make about security. First, it is parental hubris to believe that we can ever fully keep our children safe. The world will swirl around them, they will grow and will form relationships and with other wounded human beings. All of this is the normal course of maturation. The only alternative to never feeling pain or challenge is to never feel anything at all.

Second and more important, by prioritizing “security” over other values, parents are rooting decisions in fear instead of love and joy. All of this implies that there is a world out there from which we want to shield our children. Yet by shielding children, we are also restricting them from this big, beautiful world filled with relationships and experiences.

When we finally toured the child-care center which my boys now attend, the initial tour offered very little about the facilities or even daily schedules. Mr. Danny, our center’s director, talked more about the values that they hold, with a priority on building social-emotional intelligence. “Your kids will leave here knowing how to share, be kind and advocate on behalf of themselves and others.” I was sold.

Right before the pandemic hit, our center installed a new security system, where all external doors are controlled by an app. Suddenly, I found myself juggling a baby, two sets of lunches, spare diapers, and a car seat, all while fumbling with my phone. Even when I can successfully locate the correct app, it only seems to work about half the time. Nicholas has resorted to giving daily pep talks should our entrance to his school be denied again.

I ended up contacting Mr. Danny to vent my annoyance. As I began speaking with him, it crystallized in my own mind that my frustration had nothing to do with apps and locked doors. “Philosophically, I want my boys to embrace the world. The unconscious message of this security system is that we have to keep the world out.” Mr. Danny gave a sympathetic smile and commiserated. He ended up explaining that he agreed with my sentiment and had resisted installing a high-tech system for years. He also explained that he had lost potential families over the years for lack of such a system. He rationalized that the center could not share their other values if the children didn’t first walk through the door. The app and I have subsequently brokered a tentative truce.

CLICK TO TWEET
By prioritizing “security” over other values, parents are rooting decisions in fear instead of love and joy. #catholicmom

First-century Palestine was hardly a secure environment for a religious minority like the Jews living, under Roman oppression. That reality never stopped Jesus from building relationships, preaching and traveling. Jesus prioritized encountering those from all walks of life; and by doing so, embraced God’s message of love.

I pray that my sons will live their life rooted in relationships and encounter. I pray that they know the power of love over fear. I hope Nicholas never misses the sparkle of the sand just because he temporarily fears the waves.

Paul on the Areopagus: A Master Class in Evangelization
Read
Let the Children Pray
Read
Must Watch Catholic Parody Video about Lent
Read