The Gift of the Elderly

As her grandmother celebrates her 100th birthday, Janelle Peregoy ponders the blessings of the influence of loving elders in a family.

36,525. That is the number of sunsets and sunrises that my Grandma Frannie experienced as of her 100th birthday earlier this month.

My family is consistently blessed by the presence and longevity of my grandmother. She still lives in her own two-story home where she still adeptly manages her daily decisions and financial affairs. The one concession she has made to her age is reliance on family members for transportation.

Pope Francis has emphasized the pastoral care of the elderly in the last couple of years. Last November, Netflix released a heartwarming film called Stories of a Generation - with Pope Francis, which highlights the life journeys and life wisdom of several remarkable men and women over the age of 70. The Holy Father repeatedly uses the metaphor of the elderly being the roots of society and younger generations are the vines that have grown from the roots. In his message commemorating the First World Day of Grandparents and the Elderly, the Pope reminds grandparents that the Lord is always with them and that they play a crucial role in the their families and in society.

Because there is no retirement age from the work of proclaiming the Gospel and handing down traditions to your grandchildren. (Pope Francis)

My grandmother was raised Presbyterian and later married into a devoutly Catholic family. Over the years, she frequently mentioned the vow she made to raise their children Catholic. She kept that vow wholeheartedly, and enthusiastically sent her own children through many years of Catholic education. When my grandfather passed, Grandma Frannie gathered his rosaries and prayer books and gently pressed them into my hands. “These are for the next generation.” Years later when my own children were baptized, she sat proudly in the front pew. In my sons’ names, she supports several scholarship opportunities at local Catholic schools.

As Grandma Frannie’s birthday approached, I found myself wondering how she defines her own life. She has lived through a significant century, remembering as far back as the 1929 stock market crash. Later during World War II, she caught the eye of a handsome Naval officer and corresponded with him for five years before getting engaged. She and my grandfather were married 55 years before his passing. Despite all that lived history, she has never stopped learning and growing. Over Christmas, she cheered for herself as she mastered the fine art of swiping my iPhone so she could see pictures of the kids. 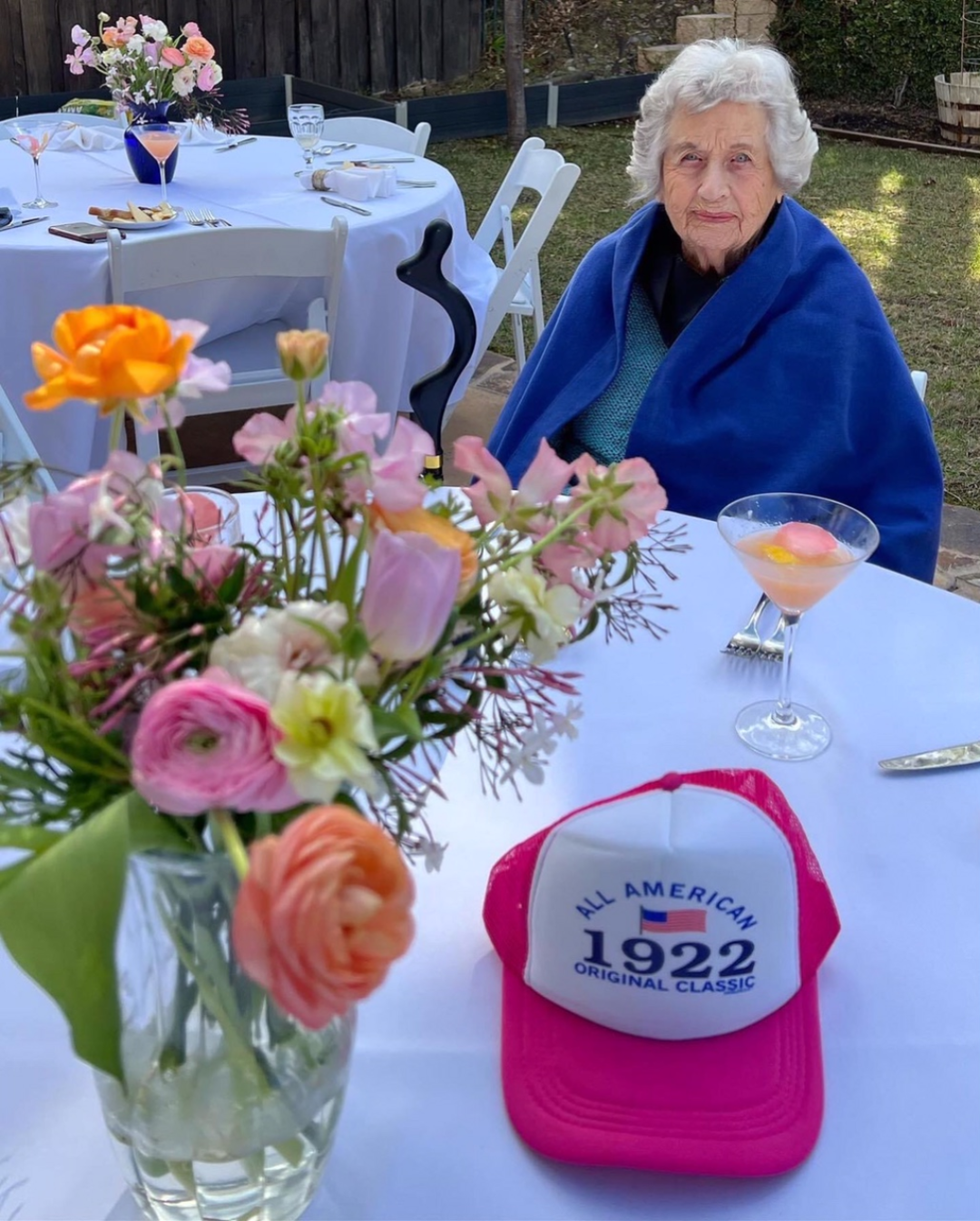 In contrast to the small family gathering we recently hosted for Grandma Frannie’s 100th birthday, the party for her 90th was a raucous affair filled with dozens of friends and neighbors gathered at a local seafood restaurant to celebrate. In the intervening decade, my grandmother has narrowed her social commitments to spend the majority of time with family. Grandma Frannie has jokingly remarked, “The downside to losing my peers is that I am forced to spend time with grandchildren.” Although she is teasing, there is a detectable wistfulness in her voice which speaks to the sadness of experiencing so much loss—of her husband, her siblings, and her friends.

Click to tweet:
Every time I sit with my grandmother, cherish her stories, and share in her laughter, I am so profoundly grateful for her influence on my family. #catholicmom

My grandmother’s truth speaks to one of many personal costs to aging. Many of our elderly experience the loss of physical and cognitive function that creates ongoing challenges for family caregivers. Of course, not all of the elderly have the benefit of close family, and vice versa. Epidemics of loneliness and alienation have their own negative health repercussions. In recognition of these ongoing generational realities, Pope Francis will continue to celebrate the elderly and lift up their loving contributions to younger generations. Every time I sit with my grandmother, cherish her stories, and share in her laughter, I am so profoundly grateful for her influence on my family. 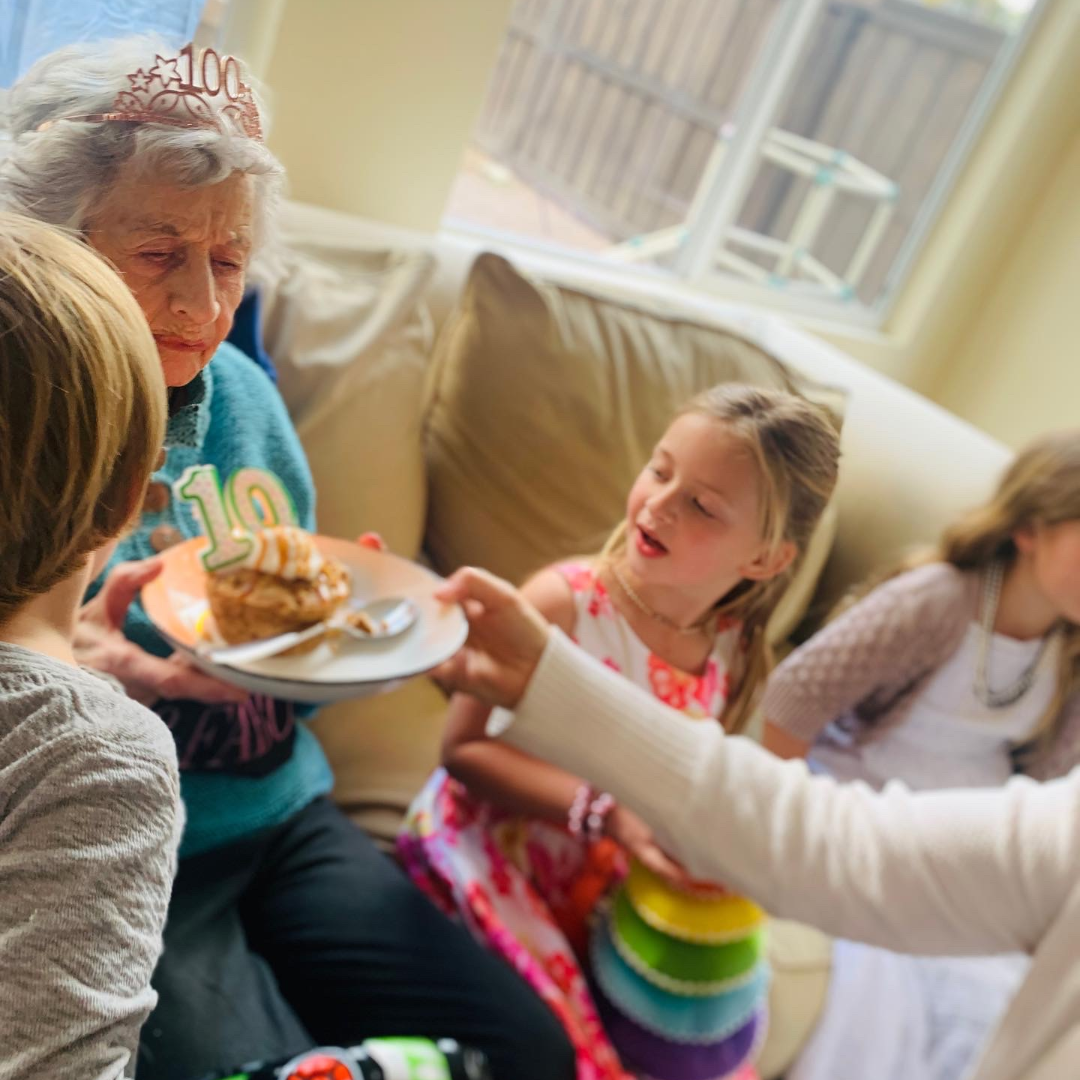 When I asked Grandma Frannie about the best part of making it to 100 years young, she smiled as she slowly surveyed our living room—scattered with toys and discarded pieces of cake. Peals of laughter could be heard throughout the house.