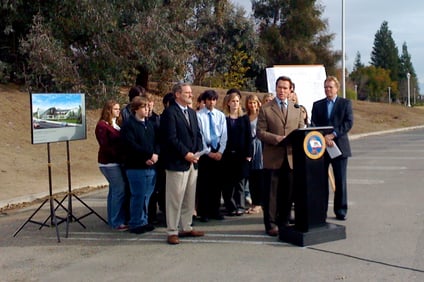 We had an up close encounter today with the political system and California state government today as Governor Arnold Schwarzenegger paid a personal visit to Eric's high school to address our state budget crisis.  Eric's school, recently acclaimed as one of the top 100 in the country in US News and World Report, has fallen victim to the budget impasse with funds for construction of the new school being held up indefinitely.  At this point, it's unlikely that Eric will ever attend school in the new buildings, but he learned an important civics lesson today and was able to meet and shake hands with the governor.

Following his speech, which you can view here, the Governor took time to meet with those of us in the audience.  Somehow, I was in the front row and was able to actually spend a few moments speaking with him.  What did we talk about?  My son - I thanked him for coming and told him how proud I was of my son and his schoolmates for all of their hard work in school.  I contemplated some of the other things I could (or should...) have said to him, but as a Mom my first thoughts today were of Eric and how this experience is one he will remember for quite some time. 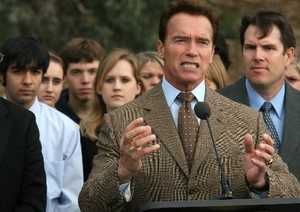 Eric is not visible in the video (he's in the center of the back row and you can see his ear a few times), but I think some of his friends may have gotten a photo with him and Governor S.  If so, I'll share that here soon.

Today's civics moment is a reminder that regardless of whether or not we personally agree 100% with our elected officials, it is good to make the effort to see them if given the opportunity.  Eric is at Academic Decathlon practice now, so I haven't been able to speak with him about his reaction to meeting "The Terminator", but I am looking forward to having that conversation.  I'm also looking forward to Eric's take on how he personally would fix the budget mess we have on our hands - knowing my son, I know he will have a thought or two on the subject!