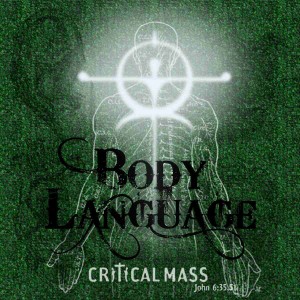 How's this for counter-cultural? Critical Mass, a Catholic rock group based out of Toronto, has crafted their latest CD, Body Language using rock music--a musical genre notorious for reveling in salacious and lewd imagery--to demonstrate and instruct about the Theology of the Body.

For those unfamiliar with the Theology of the Body, it was a series of lectures given by Pope John Paul II, upon arrival to his pontificate, about understanding sex--in all its fullness--in light of the Catholic Gospel. George Weigel, the biographer of Pope John Paul II, called this series a "theological time-bomb" which would soon "reshap[e] the way Catholics think about our embodiedness as male and female, our sexuality, our relationships with each other, our relationships with God--even God himself." (Forward, Theology of the Body Explained, Christopher West).

Disseminating such knowledge to the level that a non-theologian can grasp its truths is hard enough for an author or a public speaker... but a rock group? Music has a language all its own, and popular music disseminates thoughts with a series of sentence fragments�oftentimes speaking to the lowest-common denominator, building to a repetitive and hook-y chorus, with the option to incorporate a bridge�an alternate melodic and lyrical detour�if need be. Popular music today can be used as an effective teaching tool, especially when the music gives the lyrics a voicing that provides emotional depth to the cut-and-dry images contained in the lyrics.

Musically, Critical Mass is up to the challenge. After following this band for many years, I believe this is the best they've ever sounded. There is clarity and musicality in its guitar riffs, accompanied by solid production chops that are equal to what I hear on secular radio. The style veers from hard-rock ("Body is a Language," "No Consequence"), to joyous pop-rock ("Alone," "Walk You Home") to rock balladry ("Devotion") to praise and worship ("Body and Blood (Adoremus version)"). Regarding this last song, a reworking of an earlier song, it stands head and shoulders above the praise and worship musical landscape, improving upon the original with a wonderfully ethereal tone, and incorporating traditional Latin lyrics to the final product. I really appreciate it when Critical Mass lets it all out, taking musical chances and coming up golden.

Lyrically, David Wang and company have stretched their craft and raised the bar; there are stories here that speak to teenagers about the sexual permissiveness in society ("No Consequence"), the Steve Taylor-esque slam on artificial contraception ("Contraception Interception"), and the joys of committed celibacy ("Alone"). You may be hard-pressed to find a musical project that works this hard to shine the light of God's grace with this much minute detail in the darkened corners of our sexually saturated society.

Taking into account that this is Critical Mass's finest musical testament to date, with deep, detailed lyrics that are this faithful to a pertinent and applicable aspect of Catholic teaching today, I am hesitant to say that, to my ears, the marriage between lyrics and music do not entirely work.

One of the problems is that the melodies sometimes project an anger, a roughness, that runs contrary to the tone of some songs. Granted, this isn't a problem when singing about the corruption of today's media, or the problems within artificial contraception, but hearing the angry guitar riffs for "Friend" (a plea for compassion) and "Body is a Language", which lays the foundation for the glorious teaching of the Theology of the Body, is disconcerting. Not to mention that most of the lyrics are barely audible underneath the band's wall of sound (admittedly not a problem for those who have the liner notes on hand).

But even reading the lyrics and the liner notes, you read words that are more likely associated with PhD dissertations than in popular rock songs. Phenomenology. Phylogeny. Manichaeism. Pyres. There is a certain novelty in hearing such words used in a popular song format (in which the first of these words was vocally truncated into four syllables). In fairness, the band tries very hard to explain these concepts to the average listener in the liner notes; but it's still got a ways to go.

Even though I have reservations about the final product, I wish all bands choose to not play it safe, and take the educated risks that Critical Mass has done. They ought to be commended for helping advance Catholic music and raise the listener up with knowledge and wisdom of our faith. This is most especially true for the sonic blast that accompanied this theological time bomb of the Theology of the Body.

You can purchase Body Language at the Critical Mass website, CatholicRock.com.