Review of The 13th Day by Leticia Velasquez 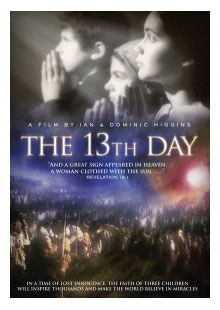 In The 13th Day, a timely message of Fatima has been retold for a new generation. Directors Ian and Dominic Higgins, accomplished more than a pious revival of a fond moment in Catholic history, they re-cast familiar images of a story whose relevance has grown with time. Told from the perspective of Sister Lucia dos Santos who is writing her memoirs in her Spanish convent in 1932, the film emphasizes the emotional turmoil, which ensued when she had a heavenly visitor in 1917, and the personal cost of being Our Lady’s messenger. The term 13th Day refers to the series of six apparitions of Our Lady, beginning on May 13, 1917, on the thirteenth day of each month, ending on October 13, 1917 with the miracle of the sun visible to over 80,000 people, according to newspaper articles.

The Higgins brothers' background in photography, as evidenced by their use of the Chiaroscuro technique, in which faces emerge from darkness into light, emphasizes the theme of light that is central to The 13th Day. Character’s faces emerge from shadowed darkness, to black and white, to muted color and as they respond to the heavenly messenger portrayed in blinding light. This technique may not appeal to those who prefer a traditional portrayal of this story, yet it has a haunting quality achieving an arresting emotional impact. Interestingly, not only are Our Lady and the children flooded with light and color, but those who come to accept the apparitions also take on a tinge of color. Clearly, this technique evokes the phenomenon of rainbow light that washed over the eyewitnesses in Fatima on the 13th of August 1917

The portrayal of Our Lady is breathtaking, and there is a stunning ‘holy card moment’ pausing to show the traditional portrait of the three children kneeling at her feet at the base of the shrub oak. The high point of the film is the miracle of the sun, showing the brilliance of its colors, its wildly erratic movement, and its menacing plunge towards earth, terrifying tens of thousands of witnesses. The film captures this with intense realism, focusing on the intensity of terror and joy felt by the witnesses. The 13th Day shows in passing the Third Secret of Fatima, where a figure in white (assumed to be Pope John Paul II) ascending a hill amidst the devastation of famine and war towards a cross where he is shot.

The musical score is lush, adding tenderness to the rare moments of innocent joy what is a somewhat unsettling film. Hints of Allegri’s "Misere" add a touch of transcendence to the emotional soundtrack, and it is one of the best features of the film.

The young Portuguese actors who play Lucia and Francisco convey a mixture of simplicity and emotional strength for their roles as innocent souls entrusted by Our Lady with the most critical and terrifying of secrets. Jacinta is seen for the innocent six year old she was and has a minor role.

The vivid visions of hell and trials endured by the children are harsh for younger viewers, though profoundly important to the story. One forgets that the Fatima children accepted suffering for the sake of sinners, and the filmmakers remind us that Lucia and her cousins were immediately put to the test with their family members. Children dealing with broken families and schoolyard violence might welcome a film which shows children who see through the darkness into the light of heaven. In fact, all children raised in today’s Godless public square would benefit from the message, which calls them to lift up their eyes to heaven where a loving Mother awaits their prayers. Two generations of Catholics, who have been raised on ‘Catholic lite’ CCD programs, need a wake-up call on what it means to be the Church Militant. In the face of a darkening world landscape, The 13th Day is just that.

The 13th Day reminds viewers not only of the message of Fatima, but of the price paid by the young visionaries so honored by Our Lady, and draws striking parallels between hostile governments and media of 1917 and persecution of the Church in our own time. It is a somber film for a sobering message. Recommended for age 8 and up. No language or nudity, but scenes of hell and children being persecuted may be disturbing for younger viewers.  Highly recommended.