The Star of Bethlehem DVD 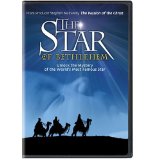 In time to truly celebrate Christmas, you will want to check out a wonderful film entitled The Star of Bethlehem

. Brought to us by Mpower Pictures, the company behind the critically acclaimed film The Stoning of Soraya M., The Star of Bethlehem

highlights compelling and dramatic evidence that the celestial event trumpeting the birth of Christ was an actual occurrence as described in the  nine clues given in the book of Matthew.

Honestly, not being a scientifically minded person, I was concerned that this film might be a bit too "deep" for me, but I must say that I found the arguments presented to be both compelling and quite fascinating.  Here's a brief synopsis of the film:

Scholars debate whether the Star of Bethlehem is a legend created by the early church or a miracle that marked the advent of Christ. Is it possible that the star was a real astronomical event?  From Producer Stephen McEveety of MPower Pictures (The Passion of the Christ) comes an amazing documentary on the Star of Bethlehem. This presentation has been viewed by tens of thousands in the U.S. and in Europe and this new DVD reveals the evidence for God's existence as seen in the stars above. Presenter Rick Larson walks you through biblical and historical clues revealing the eternal significance of this celestial event as well as the vastness of God's creativity. Discover the secret of the Star...a secret of magnificent beauty.

I hope you enjoy the following trailer and that you will take a look at purchasing The Star of Bethlehem for your family this Christmas season.  We need to support films like this that inspire, inform and entertain!