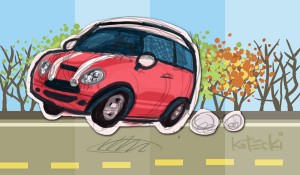 I became a father about a year ago. Not the kind with black shirts and white collars; the kind with puke-stained shirts and Cheerio crumbs in the backseat. Before that, my wife and I had been married for eight years and worked together on our small business. We were used to working long days, coming and going as we pleased, and eating out at nice, quiet restaurants.

Obviously, that all changed with the arrival of little Lucy.

In just over a year, I have become quite skilled at diaper changing and more desensitized to bodily fluids than I ever thought possible.

Not having our first child until well into our marriage came with both advantages and disadvantages. On the plus side, we developed strong communication skills and had lots of time to discuss our hopes and strategies for parenthood. On the downside, we were pretty well set in our ways.

Eating out at nice quiet restaurants is easy to get used to, after all.

Our first year of parenthood was quite a challenging transition, as we learned how to juggle the baby and the business on much less sleep than we were used to. I think we came out ok, but I still struggle from time to time with the new season I find myself in.

Seasons. Just as the year is divided into spring, summer, fall, and winter, our lives can be divided into different seasons. Our life at fifty looks a lot different than our life at twenty. God asks different things of us depending on which season we are in.

Jesus himself experienced different seasons of life. His childhood and adolescence were, like all of us, periods of learning and growing. Then he moved into a season of work as the son of a carpenter, followed by a season of temptation in the wilderness. The temptation led to his three years of ministry, which transitioned into his passion, death, and resurrection. Each season brought with it a different mission and call. When Jesus was in the desert, God wasnÕt expecting him to be building dining room tables and entertainment centers for the townsfolk. And his time in the wilderness called for absolute solitude, while his active ministry required him to be out among the people.

My problem is that even though I am in the new season of early fatherhood, I still act like I should be doing the same things I did in my previous season. How can I work the same hours and accomplish the same number of things as I did before I had Lucy? ItÕs as frustrating as it is impossible. What I am now finally realizing is that God is not expecting me to do the same things I did five years ago.

That extra pressure is coming solely from me.

In the last decade, my job was to follow his call to help people who are feeling rushed, stressed and overwhelmed. I worked long hours, did a lot of networking, made a lot of mistakes and learned a lot about business and marketing. With His help, I was able to create a solid business that provides for my family. Now that the business is more stable than it was in the early days, God is giving me the opportunity to put more focus on my role as a father and husband. It's not that I'm supposed to neglect the business, it's just that He wants to me to allocate my time a bit differently.

The Big Guy Upstairs (I'm pretty sure that's what's on his business card) seems to be more aware of our limitation of having just 24 hours a day than we are. Apparently, He figured 24 hours was the exact right amount of time. If we're trying to cram 27 hours worth of stuff in a 24-hour day, that's our problem, not his.

And when we try to pack our day like a family of five heading out on a cross country trip in a Mini Cooper, stress is sure to follow.

Stress happens when we forget what season we are in and try to do too much.

Are you in a state of near-constant overwhelm? Are you always feeling rushed, wishing you could find a way to add a few more hours to your day? Perhaps you are trying to do things that aren't required of you during this particular season.

It would be easy if there were some obvious things you could sweep off your plate. Bad stuff. Useless stuff. Unimportant stuff. But it's not a matter of doing things that aren't worthwhile. My guess is that everything on your plate is good.

It's awfully hard to let go of something that's good.

Just because something is good doesn't mean you have to do it.

Sometimes we have to say no to the good to say yes to the best.

Maybe some of those good things can be let go of now that you find yourself in a new season. And maybe some good things need to be put on the shelf until the next season. For instance, if you are seriously ill, maybe you need to give yourself permission to let go of some of your responsibilities so you can focus on getting well. If you are a parent, perhaps your career ambitions need to be downsized a bit in order to become the parent God wants you to be. Or maybe some of your social activities or volunteer efforts can be resumed when your kids are a little older.

Is it easy? Of course not. But a life spiraling out of control and burdened by busyness and stress is not what God desires for you.

Quite the opposite, in fact.

Slowly but surely, I'm learning to let go of the guilt of not working as much as I used to. I'm making a point to notice, appreciate, and savor the exciting blessings that are new to this season I now find myself in. I'm enjoying the breathing room that has been created by cleaning a few things off my plate, allowing more time for Lucy and more time for God.

And I'm realizing that as great as a quiet meal at a nice restaurant can be, it's nothing compared to a quiet evening spent with a one-year-old eating Cheerios out of my hand.