Praying as we believe! by Hugh McNichol 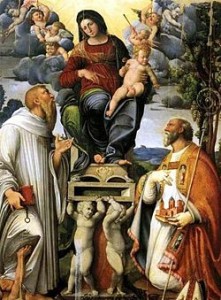 The phrase, "Lex Orandi, lex credendi" has always been the battle cry of good liturgical practices. Namely, "the Church prays as the Church believes". This theological tidbit of liturgical continuity has guided the actions of the universal Church in its expressions of prayer. Whether it is the Liturgy of the Eucharist or a celebration of the Liturgy of the Hours...the prayerful actions of the priest and the faithful always reflects the foundational roots of what the Church believes.

These beliefs are appropriately expressed in our various liturgies.

This does not mean however, there is never a diverse group of alternative rituals and prayers that might be used in worship.
The penitential rite offers various forms that may be used in the Liturgy. One option is to include the revised form of the Confiteor, and sing the Kyrie. During the liturgical season of Lent perhaps it is appropriate and fitting that we focus more distinctly on our call to penance and conversion and express our needs for forgiveness in alternative forms. Reciting this form of the penitential rite not only recalls our pre-Vatican II traditions of liturgy, but also recalls the Roman and Greek influences that have affected our worship throughout the centuries. Remember, the Kyrie is a Greek invocation that is rooted in our prayers before the Great Western Schism. While it might imply there is a true lack of unity between Occidental and Oriental, East and West parts of our Church most clearly it is an invocation to the Father of mercies for universal forgiveness. Once again, our active praying expresses the belief we foster in a merciful God that calls all peoples to salvation.

The Liturgy is also a form of teaching all of us about the rich traditions that play a part in our Catholic lives. Our liturgical expression is reflective of the cumulative journey our Church has experienced since the time of the Apostles. It is also reflective of the diverse cultural contributions that have been made to the form of our liturgical expression for centuries. Our linguistic roots in the Roman Rite are in Latin, but even liturgical development recalls that Greek is an integral tongue of prayer in the Catholic experience worldwide.

In the United States, especially since the liturgical reforms of Vatican II, there has been a tendency to forget our Roman and therefore Latin roots in the liturgy. The Fathers of Vatican II indicated very clearly that all Catholics should be able to celebrate the essential parts of the Mass in both their native tongues (in our case...English), and in Latin (the traditional language of the Church of Rome).Perhaps only we as Americans have this aversion to foreign languages and perhaps a fear of Latin. Maybe it reflects an antiquated Church or a deeply seated phobia of gerunds and gerundives. Whatever the reason it is refreshing to see the celebrant of the liturgy exercise true leadership of the prayerful assembly and use all available forms and options available to make the Eucharistic liturgy reflect both the beliefs of our Church as well as the traditions of our Roman Rite.

Once again, lex orandi, lex credendi...does not preclude variety and options, but rather calls celebrant and the people to an active appreciation of the Liturgy, past and present.

Often it is noticed that people seem confused and caught off guard when the celebrant offers various options to our liturgical expression. Perhaps they do not know the responses, do not recognize the language or just do not know that a different form is capable of being used by the celebrant. Excellent opportunity for education in liturgy, church history and sacramental theology. Our expressions of faith not only recall unchanging sacramental truths, but also reflect the active living Church, which offers its message of salvation through changing manners and forms throughout the ages.

The next time you hear the celebrant intoning, Agnus Dei...in place of Lamb of God, recall that our faith is a rich inheritance of traditions and expressions of prayer. Embrace the linguistic and cultural heritage of our Catholic Church, learn how to sing along in various languages, and perhaps Lex Orandi, lex credendi will no longer seem like a frenzied St.Prosper of Aquitaine running across the Pont du Gard in an anti-Pelagian seizure, but another appreciation of our faith's vast history and traditions.