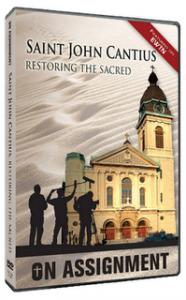 Too often the story is told about Catholic institutions being consolidated, merged or closed throughout dioceses in the United States. For, Don & Chris Carney, of the StoryTel Foundation the story is a remarkable message not about closures and endings in the Catholic parish communities, but rater one of restoration, renewal and rebirth. Together, both brothers operate the non-profit foundation, StoryTel with a distinct purpose in mind; namely the restoration of the sacred to our Catholic parishes and institutions nationwide. They accomplish the remarkable task of renewal and revival through the production of documentaries called, " On Assignment," that tell the stories of charitable institutions in the United States that have overcome the pitfalls of urban blight, migration to the suburbs and declining enrollments through a genuine commitment of prayerful renewal of Catholic rituals and principles.

Saint John Cantius Parish on Chicago’s North-west side was a victim of urban decay, isolation from multiple highway expansions and decreasing parish enrollment. However, through the activities and inspiration of Father Frank Phillips, the parish destined for closure became an inspirational oasis for the rebirth of parish activities and a new life. While attending Sunday Mass at the Church both Don & Chris Carney were deeply inspired by the old church’s architectural grandeur and deep spiritual intensity, they decided to help with the development of a documentary. Saint John Cantius; Restoring the Sacred marked the first production for StoryTel Productions. Working with Father Frank Phillips they produced a broadcast quality documentary that reveals the life of Saint John Cantius Parish as it struggled to regain a vision and renewed purpose for its Catholic ministry.

Initially, the parish was one of the first in the Chicago Archdiocese to celebrate the Eucharist in both English and the traditional Latin. Prior to the promulgation of Pope Benedict’s Summorum Pontificum, the Mass of Pope Paul VI was celebrated in Latin according to the norms directed by the Fathers of the Second Vatican Council. The parishioners of the parish responded favorably and people started to return to this challenged parish for Mass, and increasingly other religious and social activities. The balance achieved between both the old and the new seemed the balance that drew people back to the local parish community of Saint John Cantius. StoryTel Productions also played a pivotal part in this evangelization of what was going on at Saint John Cantius. The production of the documentary was view on EWTN and generated interest in the project from all over the United States and even the world.

At the same time, the parish continued to grow and develop, and a new religious community of priest and brothers took root in the parish. The Canons Regular of Saint John Cantius was created at the parish to undertake a unique ministry in the Church, namely…a restoration of the sacred. The baroque architecture of their parish, the stained glass, the statues and the ability to celebrate both the ordinary and extraordinary forms of the Eucharist provided the seminal activities that rejuvenated the parish, and StoryTel told the tale through its video production.

The production of a documentary is quite an expensive undertaking and that is where the industrious and creative activities of both Don & Chris Carney kicked in. Don Carney drew on years of experience in the entertainment industry and Chris Carney marshaled his expertise in the financial industry. Together, they generated philanthropic support for the production and distribution of the, On Assignment, DVD and produced a source of evangelization, catechesis and revenue generation for the parish of Saint John Cantius. Fr. Scott Haynes, CRSJC of Saint John’s calls the work of StoryTel, "a powerful tool for our parish’s revitalization and the work of our religious community! Fr. Haynes also called the documentary, "a decisive tool for attracting vocations, a video that clearly proclaims, who we are and what we do!" Excitedly, he also praised the documentary for its monetary contributions to their ministry.

When speaking with Don Carney of StoryTel, one cannot help but feel the energy and dynamic enthusiasm he brings to his company’s vision of restoration and revitalization of sacred Catholic activities and ministries. The mission for StoryTel is not one of self promotion, it is a company that genuinely wants to make a difference through the videographer’s camera lens, telling the stories about people and places that need financial, spiritual and temporal help and renewal.

Chris Carney directs the behind the scenes activities of generating financial support for StoryTel’s projects and generating interest with individual and corporate sponsors. While not the person behind the lens, Chris is another dynamo of committed activity and has a contagious devotion to the economic benefits StoryTel offers to humanitarian aid through the production of its documentaries.

Together, both brothers are developing a not for profit corporation that is committed to utilizing the latest technologies in media communications to spread the message of the Gospels by contemporary media productions that inspire faith and restore our appreciation of the sacred.

StoryTel Productions has produced a second documentary, Salem Christian School; All Things Are Possible that illustrates the heroic battle of a Chicago inner-city school to keep bringing the message of Jesus Christ with high-quality education. The story follows the changing demographics, economic problems and the challenges in keeping a school alive in both faith and physical school functions. The documentary clearly shows the efforts of students, faculty and other heroes that keep the school alive despite the adversity of the city, the school system and persistent pessimists working towards the school’s institutional demise.

The work of StoryTel indeed is an embodiment of the call of the Catholic Church towards a new Pentecost in the Church through all modern means and methods of catechesis and evangelization, especially through modern media technologies. The organization is about restoring the sacred to all aspects of our modern society. The company’s mission is to call critical attention to our contemporary society’s disregard for what is sacred, in our often secularized and less than spiritual modern lives. Their mission and ministry is to bring about a transformation of people’s lives and provide insights to how the need to restore the sacred surrounds us daily, in every aspect of our lives. Through the use of media technologies StoryTel shares the messages of people, places and organizations that are successfully restoring the sacred through extraordinary activities, incorporating faith, hope and love in their local communities.

Further information about StoryTel can be found at http://storytel.com . A visit to the site will also provide links and excerpts from their media productions with links to both Saint John Cantius Parish and Salem Christian School. Both documentaries air regularly on EWTN and New Life Christian Network. The stories recounted by StoryTel Productions are infectious and they tell the story of genuine faith and renewal that motivates their production company and the many people and institutions it hopes to faithfully serve.