Winning One for the Gipper 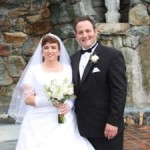 If you’re single, or have a family member or friend who may be leading a single lifestyle, please share this article with them and refer them to CatholicMatch.com for additional resources. Today’s article was written by Nance & Tony of CatholicMatch.com.

I had been on CatholicMatch for almost three years back in 2006 and honestly, I was at a point in my life where I was not even contemplating marriage anymore. I assumed that it was not my destiny to marry; that God must have other plans for me, so I decided to discern religious life. I was in the midst of investigating several orders and had been in discussions with a few. In the meantime, I continued to practice one of my greatest passions…debating politics! Catholic Match provides a great outlet in their forums and I found myself posting often in, what is affectionately known as, "the war room", aka, St. Thomas More.

So, here I was, minding my own business, posting in St. Thomas Moore when along comes some tough guy accusing me of being, of all things, a FEMINIST!  Well, I had to set him straight a bit…we went back and forth via the forums discussing the topic at hand until finally the thread was closed due to size. Well, I was in no way about to allow him the last word (not a BIT of feminism in me at all) so I shot him an email to further explain my position.

Mind you, I NEVER initiated contact with men, as I believe it is the man’s place to take the lead and as I stated above, I was not interested in seeking a relationship any longer. In any case, I was replying to a post and I just had to speak my peace.  Of course, that prompted a reply from him, which then brought another from me, etc., etc., so on and so on.

Needless to say, in the process, we discovered we have a great deal in common (scary as that may be to some) and actually enjoyed our easy banter back and forth on the issues we don’t exactly see eye to eye on.

In addition, however, this gentleman was in the process of "researching" faith. He had been to a variety of different church services, Protestant, Lutheran, Episcopal, and even one of those "non-denominational" types…but he kept finding that the only service that made sense and felt "real" was the Catholic Mass. Yes…this gentleman joined Catholic Match (CM), not as a Catholic…but as someone looking for answers in regards to the faith.

Of course, our political discussions eventually led us to discussions of faith and he had many, many questions. Questions that perhaps a few years back, I would not have been able to adequately answer…but since I had been on CM and participated in the forums, I found I learned a great deal and have grown in my own faith. Participating in the forums, particularly the Apologetic forums, where the faith is discussed with not only much emotion, but also with extensive knowledge by some CMer’s, provides a great learning atmosphere. I found that many of the discussions in those forums prompted me to seek my own answers and research our faith further…and all of which, helped me guide Tony in his research as well.

Eventually, Tony and I moved from CM emails and chat sessions to phone calls. Both of us anxiously anticipated each new conversation we would share and the phone calls began to get longer and longer, sometimes with us on the phone for six hours! This went on for several months and we decided that at the end of six months, if we were still as excited to talk with one another and still were enjoying learning about each other that we would meet in person. We didn’t actually pick six months on purpose, it just sort of worked out that way; as we planned to spend a weekend together, Tony coming out to California to visit me from Chicago. We picked our weekend based on a shared interest, air shows. The first weekend that October was the Mira Mar Air Show and we thought it would be a great event for us to share together. At least we would have lots of things to discuss as we would spend the day looking at all the planes and watching them fly about. Tony had never been to an air show and I basically was raised at them, with a father that was a pilot. So, it was all set…the first weekend in October, if we were still chatting, Tony would come visit.

Sure enough, we were, he did and it was the most wonderful weekend. Honestly, it couldn’t have gone better. Meeting in person was just sort of a formality. We had learned so much about each other already and had such a comfortable and wonderful friendship that seeing each other for the first time was just very natural and easy.

From there, of course, the story is much longer, but basically…we promised to visit each other as often as possible. Thankfully, I had a job that allowed me to travel and since I worked from home, it didn’t matter where my "home" was…so I was able to visit Tony quite often without worrying about taking time off.

Since then, Tony and I have come to discover we have similar thoughts on how to raise a family and what we desire for our future, we share similar beliefs, values and ideals in pretty much all of life’s topics, we are first and foremost great friends and most of all, we both understand that without God we won’t be able to achieve anything, nor will we want to.

Tony called me one day, shortly after our first visit, to tell me that he had just come in from his first RCIA meeting and asked if I would be his sponsor. What a wonderful surprise that was and what an honor for me. Tony was confirmed through RCIA at the Easter vigil, 2008.

Our relationship continued to grow and we knew God had something wonderful planned for us. Together, we took time to always put God first. We would say the Rosary together at night via the phone. We said Novenas together and we often discussed our thoughts on the Gospels. We made a vow to always let God lead us and recited together often, "Jesus, I trust in You".

We both experienced a great deal during our three-year courtship. After eight years with my company, I was laid off. Tony, being in the commercial construction industry, was in and out of work several times. We both own our homes, but both of us were dealt a blow when the housing industry dropped in value. After much contemplation and discussion, we finally made the decision that either our relationship was going to end or we had to move forward. Both of us being out work, traveling to visit one another was just no longer an option. So…last May, I flew to Chicago to help Tony rent his condo, pack him up and drive across country to live out here in California. We took a big chance, but honestly, had nothing to lose…so we once again, placed our trust in Jesus and let Him lead the way.

We were very fortunate to find wonderful tenants, almost immediately after we decided to rent Tony’s condo. We packed up and had a very pleasant journey together, where we learned even more about each other along the way. Tony moved into my house (don’t get excited now…my mom lives here too and Tony had his own room!) and believe it or not, Tony, who had been out of work for the past six months, found a job in less than a month out here and has been working fulltime ever since, in the industry most heavily hit, nationwide and in particular here in CA, by unemployment! If that’s not a miracle, we don’t know what is!

Obviously, since Tony moved, we knew our relationship would be moving forward again, but were unsure of when or how. Again, with me being out of work, money was tight and finances have been a big worry. But once again, we placed our trust in our Lord and in September of last year, Tony asked me "formally" to marry him. Of course, I was thrilled and immediately said yes and then the planning began!!

We picked our wedding date, based on a couple of things, but one of the biggest being that February 6th is the birthday of one of the men we admire most, our hero, Ronald Reagan. We decided to get married at my family parish in San Diego, where three of my brothers were married as well. We were blessed to have a good friend marry us, Fr. Bill and our nuptial Mass was very traditional and simply beautiful. The whole day, for us, was an absolute dream come true.

We thank Catholic Match for being a part of our story. Obviously, we know we never would have met otherwise. We continue to place our trust in Jesus, as I am still out of work. But we know that God has led us this far and as long as we continue to follow His path we will continue to be blessed abundantly.

If you’re single, or have a family member or friend who may be leading a single lifestyle, please share this article with them and refer them to CatholicMatch.com for additional resources.