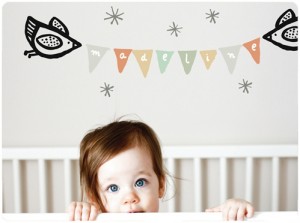 When I found out I was pregnant with this baby, my third, the first thought I had was an image of my husband’s face. The second thought was that my two girls, 5 and 2, would be thrilled.

Then I thought about where we would put this baby. I wondered how I would decorate a nonexistent room with a saint’s picture, with blankets made just for this child, with drawings made by older sisters over the course of months of waiting.

Did I mention that I have zero decorating abilities?

I have never "done" a nursery, though I’ve had two opportunities (and plenty of offers of help, subtly stated by friends and sisters-in-law). I just never saw the need; wouldn’t it be more fun for said child to decorate their room when they had their own taste? My five-year-old, for example, had a chance to pick out her own room color when we redid our upstairs, and she chose a color I would have never picked for her.

Though I seem to lack the "nesting" traits inherent to most women’s pregnancies, it was nothing less than delightful when the package came bearing a Birdie Banner arrived from Wee Gallery.

Here was something I could do for my new baby that would be fun, and yet not too much for my terrified-of-decorating self. They’re sturdy and lovely, but simple. According to the package, they’ll stimulate my baby, but I just love that they’re not ugly!

I’ll be checking out more from their website in the coming months, I’m sure, and perhaps I’ll tap into the talents of my five-year-old resident designer.

Don’t miss your chance to win your own Wee Graphics Birdie Banner in one of the prize packs in the June giveaway!