Waiting on a Woman 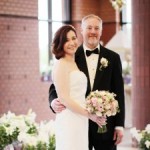 "Why do you have to go to the Internet?", Monique wondered, as she weighed the pros and cons of joining Catholic Match. It seemed so unnecessary to the delivery nurse and practicing Catholic and perhaps even a drawback. It would be a stretch to say she had a sudden transformation—but hearing about CM through outlets like EWTN, made her decide to give it a chance. There were no expectations, just a willingness to see what played out.

Monique got an emotigram from gentleman named David. She didn’t know it was one of numerous emotes David had sent out. Unwilling to simply stand by as a passive observer, David decided to simply initiate very light contact with those with whom there might be a spark of interest, and see what played out from there. Both of them had the benefit of approaching the world of online dating with realistic expectations and openness to what God might have in store for them.

David was fortunate enough to receive a wide variety of feedback from his emotes, but Monique had a decided advantage—that of locality. She noticed the man who contacted her was from her hometown, and upon noting where in town he lived, figured he probably went to St. Anne’s Parish. As it turned out he went to St. Sylvester’s…as did she.

Their approach to seeing each other was very much akin to the approach to online dating in general. They were relaxed, they enjoyed each other’s company and a healthy willingness to see if more might be there, without trying to force it. This was also a product of necessity—while both were divorced, only David was set with his annulment. Monique had to go through the process. It took time, but also allowed them to deepen their relationship. One of their dates was to a Brad Paisley concert. When the country singer began his hit "Waiting On A Woman", David shouted "That’s my theme song!"

Waiting was made more bearable by the fact both had a strong foundation in Faith. Both were already doing Eucharistic Adoration at St. Sylvester’s. David was part of the Relay For Life, another place where they nearly walked into each other before their CM days, but never quite met. It was important to both that they find a practicing Catholic—having seen their first marriages not work out, both had clear ideas of pitfalls to avoid and they freely discussed them with each other. "The seven faith questions were important to me", Monique recalled. "Either you’re in or you’re out."

There were no shortage of good times, including humorous ones in the course of their courtship. Prior to their first date, David needed to have his eyes dilated, so he had to show up having trouble with his vision. With Monique not having her picture posted online, he had no idea what she looked like. Flying blind, in more ways than one, he continually asked incoming women "Are you Monique?" One of them chuckled and said "You’re on a blind date, aren’t you?"

And in the midst of the good times, there were the life situations where they demonstrated character to each other. David’s son has two transplants, and the way he cared for the boy made a big impression on Monique, who deals with cancer in her eye. "He didn’t shy away", Monique said. "God puts people in our life for a reason and sometimes you just have to trust."

The trust they showed in following God’s plan is not only working for them, but extending to others. A friend of Monique’s inquired how she met her new husband. Upon hearing, the friend figured at first that online dating wasn’t for her. But like Monique, she decided to give it a chance. And like Monique, she is now getting married.

David and Monique were wed on April 10 of this year and there are surely lessons that all can draw from them. They knew what they wanted and were willing to learn from previous experiences. They were cautious, yet open. They had a balanced courtship, mixed with good times and seeing the other respond to life’s trials. It all added up to something special. While dating, both were in the church together, and in the course of activity, ended up in front of the altar, where a picture was spontaneously taken. It proved to be a sign of greater things to come.

If you’re single and looking to connect with other Catholic singles, we invite you to visit CatholicMatch.com for additional resources.