The Lioness Sister of Saint Thérèse by Theresa Doyle- Nelson 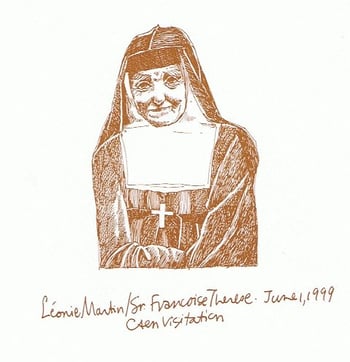 Editor's Note: A special thanks to guest columnist Theresa Doyle-Nelson and to Michael O'Neill McGrath for his kind permission to use his image of Léonie.

I have lots of favorite saints … St. Thérèse the Little Flower, Sts. Francis and Clare of Assisi, St. Rita, etc.  Each one offers me special insights into my own heart and somehow makes me feel closer to God.  I recently learned more about a person who is now on my list of favorites … she is actually not yet an official saint, but after researching her life, my heart is convinced that she is undoubtedly in heaven.

Marie-Léonie, one of St. Thérèse’s four older sisters has caught my attention for decades.  Even back in 1979, when I first read The Story of a Soul, a memoir St. Thérèse wrote under order, I noticed how this particular sister was hardly mentioned in comparison to Thérèse’s other three sisters.  Léonie (in French, pronounced lay-o-NEE) seemed to be somewhat of a shadow in the background.  I often wondered about Léonie … who she was … and why she is infrequently referred to in any work about her immensely popular sister saint.

Curiously, the name Léonie means, "lioness."   This name seems to have fit for she was a constant challenge to her family and a very difficult child for the Martin parents to "tame."  She was closest in age to her two older sisters, Marie and Pauline.  These three oldest sisters were actually born within 40 months of each other.  Marie and Pauline, however, paired together, leaving Léonie to herself.  For a time, Léonie had another sister just 16 months younger than herself named Hélène.  Perhaps she had felt a special bond with this little sister, sadly, though, Hélène died when she was only five years old.  The two youngest girls of the family, Céline and Thérèse were 6 and 9 years younger than Léonie and also paired off as best friends.   So, Léonie was a middle child with no special childhood sibling or buddy.  To accentuate matters, when the girls’ mother died, Marie took on Céline as a special younger sister to watch over and Pauline became Thérèse’s "Little Mother."  Once again, Léonie was the odd sister left alone.

Léonie’s appearance and demeanor were less charming than her four sisters.  She had poor health and was not very bright, having had great struggles with school work.  Also, she had an emotionally frail personality.  She could be very stubborn and defiant, truly a thorn in the side of a very bright, spiritual and otherwise happy family.  Léonie no doubt felt the pain and loneliness of her misfit status.

The Martin girls had an aunt who was a nun at a Visitation Monastery in Le Mans, France.  This Aunt, Sr. Marie-Dosithée, was very close to her sister, Zélie Martin and gave special attention to Zélie’s trouble child, Léonie.  This special attention was very meaningful to Léonie who as a child expressed interest in someday becoming a Visitation nun like her aunt.  Aunt Sr. Marie-Dosithée worked hard to have Léonie accepted into the monastery’s boarding school where she gave Léonie much individual attention, hoping to help her overcome learning and behavioral difficulties.  While progress was made, this disruptive child was still asked to leave the school after just a few short months.  Aunt Sr. Marie-Dosithée, however, never gave up praying for her Léonie.  She felt mysteriously convinced that Léonie would at some point discover God’s plan for her and become a saint.

Léonie’s odd and uncomfortable nature caused great concern to her mother.  Zélie Martin prayed often for her daughters, but especially for Léonie.   As Zélie became sick and sensed that death was drawing near, she stepped up her prayers for her still "untamed" Léonie.  After Zélie  passed away and  Léonie got older, she strove to become a pleasing family member.  It was a challenge for her though and she often fell back to her discomfiting ways.   As Pauline successfully entered the Carmelite convent and Marie made plans to enter as well, Léonie continued to struggle to find her niche.  At one point, Léonie abruptly entered a Poor Clare convent, surprising the whole family.  Her stay there however, lasted only two months.  Within a year, at the age of 24, Léonie attempted to become a Visitation nun … like her dear aunt, Sr. Marie-Dosithée.  However, she left after only 5 months, returning home just days after her youngest sister, Thérèse, had received special permission to enter the Carmelite convent at the unusually young age of 15.  Léonie, surely bewildered and disappointed in herself, nonetheless spent the next few months generously giving her younger sister affectionate attention and encouragement before Thérèse’s uniquely early entrance into the Carmelite convent.

After Thérèse’s entry into Carmel, Léonie together with Céline took tender care of Monsieur Martin.  He had become partially paralyzed and his mental health had begun to deteriorate.  For a while, he had to reside at a mental institution in Caen where the two sisters went to visit him at least once a week.  Often during the visits to Caen, Léonie stopped off to pray at the chapel at the Visitation Monastery where she had earlier spent five months, hoping for a vocation.

Later, at the age of 30, while three of her sisters: Marie, Pauline and Thérèse were thriving at the Carmelite Convent in Lisieux, Léonie attempted to enter the Visitation Order in Caen again.  Intriguingly, Céline had become accustomed to Léonie’s companionship and help and felt a sad grief when this "lioness" sister left.  This time, Léonie remained at the monastery for two years.  It was during this two year time frame that the girls’ father passed away.  Just a month and a half after Monsieur Martin’s passing Céline entered the same Carmelite Convent as her three sisters.  About one year later, Léonie once again left Caen and returned to Lisieux to live with relatives ... by now, both of her parents were deceased and all four of her sisters were at the Carmelite Convent.

It was while Léonie was back in Lisieux living with her aunt and uncle, that Thérèse became very ill.  During a conversation with Céline, Thérèse told her sister that when she got to heaven, she would look out for her sisters still on earth:

"When I am in heaven, I’ll draw from God’s treasures and I’ll say:  ‘This is for Marie, this for Pauline, this for Léonie, and this for the very little Céline.’"

"I’ll still be even more with you than I was before; I’ll not leave you.  I will watch over Uncle and Aunt, over my little Léonie, over all of you."

It was perhaps from these "treasures of God" and promise of "watching over" that helped Léonie.  She was 34 when Thérèse, passed away.  A year later when A Story of a Soul was published, Léonie carefully read and reread the inspired work.  Although she must have noticed that she did not appear in the book as much as her sisters, it did not seem to matter to this singular sister.  She still felt a strong inspiration to follow the "Little Way" of her younger sister.  Within a few short months after the publication of A Story of a Soul, Léonie re-entered the Visitation Convent in Caen and remained there the rest of her life.  She chose for her religious name "Sr. Françoise-Thérèse … in honor of St. Francis de Sales and her departed sister, whose presence she often felt.  Léonie very graciously accepted her sister’s apparent superiority to her.  Perhaps it was Thérèse’s written explanation of why some people seem less spiritually gifted than others that helped Léonie to accept her place in the world:

"I understood how all the flowers He has created are beautiful, how the splendor of the rose and the whiteness of the Lily do not take away the perfume of the little violet or the delightful simplicity of the daisy.  I understood that if all flowers wanted to be roses, nature would lose her springtime beauty, and the fields would no longer be decked out with little wild flowers."

Little by little, Léonie learned to rely on a simple and accepting sense of spirituality to make her way in religious life.  Though her inferiorities could frustrate her, she strove to accept and embrace her limitations in life.  She endeavored to allow herself to be the way God created her and merely accept His will.  She hung on to a belief that Jesus would offer her special protection because of her weaknesses.

As the world increasingly came to know and love her little sister Thérèse, many became curious about Léonie as well.  Often, interested people came to the monastery in Caen to see the sister of the Little Flower.  Léonie, having slowly become a gentle and much-more-tamed "lioness," avoided public attention and did her best to stay hidden.  Léonie lived within the monastery walls prayerfully living as a quiet, inconspicuous little violet in God’s large and beautiful garden.

Léonie died at the Monastery at the age of 78 in 1941 and was entombed within the crypt of the Monastery chapel.  Over the years, countless people have felt compelled to visit the tomb of Léonie … to contemplate her challenging life … or to pray for Léonie’s intercessions for their troubles.  The monastery has received multitudes of letters from around the world from people who seem to feel a bond with this little violet.  They share troubles of a difficult family member or of vocation struggles.  They ask for prayers, request that written petitions be set before Léonie’s tomb, or relay miracles received through the intercession of this gentle lioness of the Martin family.

Léonie is indeed a favorite undeclared saint of mine.  The way she struggled, faced her life challenges, accepted her faults and let God be her strength are a source of inspiration.  She lived a difficult life, and lived it well.

The calf and the young lion shall browse together, with a little child to guide them.

A BIT OF EXTRA INFORMATION:

*The religious order that Léonie settled with, the Visitation Order (also known as Visitandines), was founded in Annecy, France by Saints Francis de Sales and Jane de Chantal.  The order called to holy service men and women with physical strength and emotional endurance that made the rigors and severity of many other orders less achievable.  The goal of the order has been to grow closer to God through a prayerful, patient, gentle, step-by-step fashion.

*If you feel inspired to ask Léonie to pray for a problem inå your life, try a "Glory Be Novena" ... tie 33 knots (symbolizing the 33 years Christ spent on earth) on a piece of string and for each knot say a "Glory Be," followed by the request, "Léonie, please pray for me."  Repeat this for nine days.  If you would like a prayer request placed at the tomb of Léonie, have the nuns at the Visitation Monastery in Caen pray for your intentions, or share a miracle through the intercession of Léonie, write to:

*Happily, a full-length feature movie about Léonie is currently being produced.  It will be called "Léonie!" and is due for release this year (see www.LeonieFlim.com).

*For further reading:  Léonie Martin: A Difficult Life (Veritas Publications) by Marie Baudouin-Croix is a wonderful biography on this sister of St. Thérèse.


Theresa Doyle-Nelson is the mother of three sons, ages 24, 22, and 13.  She writes form the Texas Hill Country and can be reached through her website: www.TheresaDoyle-Nelson.com.

Saint Imagery, A Rescue Remembered: Is St. Therese trying to tell me something?
Read
Little Saint Therese - A Review & Your Chance to Win
Read
Learn More about St. Thérèse’s Life and World
Read