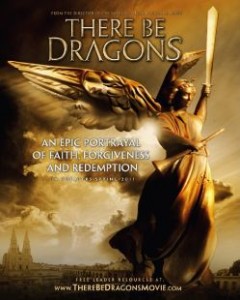 There seems to be a great deal of buzz about the upcoming Spring 2011 release of the film "There Be Dragons".  In case you haven't heard about the film, I thought I'd share some information on it with you.  Here's a basic description:

Roland Joffe, the director who brought us the highly acclaimed and deeply spiritual film The Mission has returned to his roots with the epic movie There Be Dragons, a powerful story of war, tragedy, love and redemption. Featured in the NY Times, the $35 million Dragons is rated PG-13 and planned for release in theaters worldwide in Spring, 2011. Set during the turmoil of the Spanish Civil War (early 1900s), Dragons tells the story of two childhood friends who become separated during the political conflict to find themselves on opposite sides as war erupts. One chooses the path of peace and becomes a priest while the other chooses the life of a soldier driven by jealousy and revenge. Each will struggle to find the power of forgiveness over the forces that tore their lives and friendship apart.

The film is based upon the life of St. Josemaria Escriva, founder of Opus Dei.  My online friend Marcel LeJeune recently wrote about his experience of seeing a sneak peek at the film on his blog here.  I am looking forward to seeing the film when it's released.  The trailer below shows it to be action packed but also quite dramatic.  Learn more about the film at www.ThereBeDragonsMovie.com.

The Dragonfly Connection by Marjory Erdman
Read
There Be Dragons
Read
An Exciting Beginning to a New Series: The Dragon's Tooth
Read