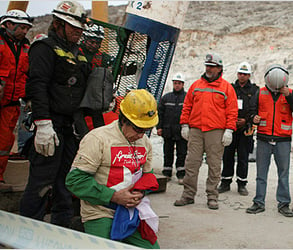 There are many stirring stories emerging along with the rescued Chilean miners, but one is of special note to CatholicMatchers. It involves Esteban Rojas, the 18th miner about to be rescued.

According to CNN, he has been with his partner, Jessica Yanez, for some 25 years. In one of the letters he sent back up to the surface, he reportedly told Jessica, "I’m rethinking this. Let’s do this properly," and then requested a Catholic wedding Mass.

The story resonated with a Texan fashion designer, who has been emailing Jessica and is designing a wedding gown for her, according to CNN. "It’s going to be in a champagne color, I understand," reported an on-located CNN journalist. "It’s going to have sequins and beads on an outer layer, a sheer champagne layer underneath, a lace jacket. It is going to be a beautiful affair."

Amazing how things come to light when you’re trapped half a mile below ground. "I was with God and with the devil – and I reached out for God," Mario Sepulveda, the second rescued miner, said in an interview.

The ninth rescued miner, 63-year-old Mario Gomez, dropped to his knees after he emerged, bowing his head in prayer and clutching the Chilean flag.

Imagine the many prayers that preceded that moment – cries for help, Hail Marys, soundless pleas.

The most grueling battles between good and evil, hope and despair, are often waged in isolation – one person, one choice. Catholic singles know this.

We all have an opportunity to learn from these miners, to choose hope over despair, to let hardship deepen faith, and to finally make changes.

If you were to be trapped below ground, what bold step might you be inspired to take?

If you’re single and looking to connect with other Catholic singles, we invite you to visit CatholicMatch.com for additional resources.