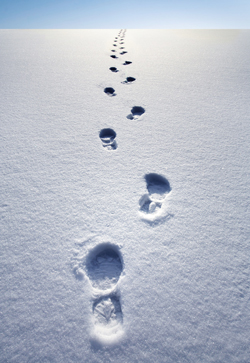 I spent the better part of last week looking for things.  From old financial papers for our mortgage refi to the battery charger for my battery-dead camera to my new un-activated credit card, the whole week was an irritating string of seemingly endless unanswered prayers to St. Anthony.  Few things are more frustrating, especially when things like your financial future are on the line.  The idea of a home loan falling through because I couldn’t find my November 15th pay stub?  Ugh!

As annoying as all that was, I didn’t experience real panic until Saturday afternoon.  Our soon-to-be-refinanced house fortunately backs up to some property with an amazing sledding hill, and the owners of that land don’t mind if neighborhood kids partake in the fun.  One of our neighbors, who has a preschool daughter, has an open invite to track through our backyard to sled on that hill.  On Saturday, (while I was digging through papers looking for who remembers which thing), our neighbor came over and asked if my son would like to join them sledding.  He suited up and I sent him out with the instruction to grab a sled and go meet the neighbors for sledding.

After a few minutes I peeked out the back window and didn’t see my son.   I figured he must be at the top of the hill.  After another couple minutes I looked again. There was the neighbor and his daughter, but not my son.  I figured he must just be kicking snow piles on his way over.  The third time I looked out and didn’t see him, I put my boots on to go investigate.  I found only two sets of footprints to the back yard.  When I called to my neighbor, he said my son had never made it out.  A frantic look at the front of the house revealed no prints around the other side.  The only place he could have gone was down the driveway and there was no sign of him anywhere on our block.  This is where the panic came in.  He had vanished! A million horrible scenarios played through my head.  Thirty minutes later, we found him across the street in a neighbor’s back yard.  He thought he was supposed to go down the block to the neighbor’s house and was wondering why they were taking so long to show up! He was even a bit annoyed that we’d made so much fuss.

I talked to my Confirmation class about sin today, and made the point that sin is what Christmas is all about.  (Want some weird looks? Try telling 9th graders that Christmas is about sin.)  But really, Christmas doesn’t make sense if we don’t understand it.  And let’s face it. Our culture doesn’t understand it.  To modern America the word sin is in itself an overreaction and carries with it the knee-jerk reaction that if one mentions sin, one is condemning another to hell.  Instead we like to talk about “bad choices”, which would be fine if we didn’t fail to mention that some bad choices are called “sins”. And that they hurt people, offend God and damage our souls.  It is the cause of every war, every social ill, every dysfunctional holiday family dinner. And if it’s bad enough and left unrepentant, sin leads to eternal death.  It’s toxic, nasty stuff.

Christmas is about sin because that’s the reason the little Baby Jesus entered the world in that stable 2,000 years ago.  It’s the reason John leaped in Elizabeth’s womb.  It’s why the shepherds rejoiced and came to worship.  God knew how bad sin was and that we can’t save ourselves from it.  Sin is the whole reason we need a Messiah!  And yet, because many of us don’t acknowledge sin, we don’t acknowledge the Messiah either.  Jesus becomes just a quaint story and a good excuse to snuggle up around the fire and spend mad cash on gifts.  Or, perhaps like many in his own day, we are hoping Jesus will save us from something else, like financial troubles or Roman occupation.  In either case, we are like my son sitting in the neighbor’s yard blissfully unaware that bad things can happen to unattended children in this big bad world.

Like my son, we are all beloved children that have run off.  Some of us are like the Prodigal who stormed off on purpose.  Some are like my Kindergartener who just lost track of things and ended up in the wrong yard.  For both groups, Jesus’ entry into human history is the big rescue act.  He knows what happens to sinners left to their own devices in this big bad world and he is as terrified about losing any one of us as I was about losing my firstborn.  We’re his kids. And he doesn’t want us to go to hell.

The flip side is the joy he feels when we return home, when we allow him to save us.  When I laid eyes on my son moseying across the neighbor’s front lawn, I think I may have felt more joy than on the day he was born.  My son was alive and well!  He would come home again and he’d do homework and I’d nag him to get dressed faster and to find his shoes.  We would all be together.  What a relief!

I imagine Jesus must feel that same joy (but greater, because he’s God) at every repentant sinner.  Can you imagine the tears that well up in his glorified eyes every time someone enters a musty wooden box and utters the words, “Bless me, Father, for I have sinned. It’s been 30 years since my last confession”?  The same happens in small ways every time we renounce a sin, vice or weakness in our lives.  Hooray! He gets to be our Savior again.  Our relationship is once again restored. We’re back together again.

Luckily, as this week comes to an end, most of my lost articles have been either found or safely replaced.  The most important is sleeping safely under his Spiderman sheets.  It’s a wonderful feeling! This Christmas season, let’s give Jesus the same joy, and allow ourselves to be found by him.